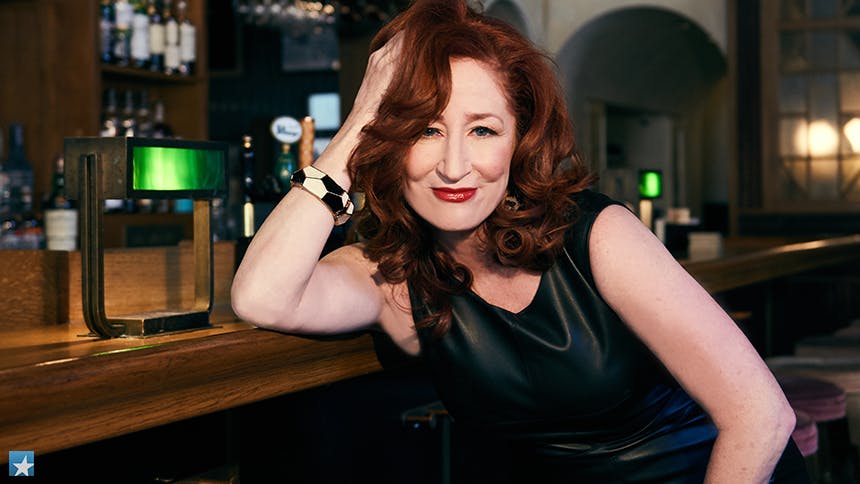 BroadwayBox and photographer Jenny Anderson launch a new photo and interview series this fall spotlighting 10 current Broadway musical replacement stars whose performances left us stunned in our seats! The illustrious group (ranging from title stars to scene-stealing co-stars) was shot at the beautiful West Village restaurant The Spaniard. Next we bow to the fierce and hilarious Broadway beltress Vicki Lewis, who delivers a mesmerizing, LOL comedic performance as the fun-loving Russian aristocrat Countess Lily Malevsky-Malevitch in the musical Anastasia


1. What was your journey like returning to Broadway after your nearly 15-year absence with Anastasia?
Well, I was going to come anyway. I missed the city so much. I had been in LA, so I was going to come in May without a job and just be back here. My husband was like, "You need to go. I know you miss it." And so, we made that decision, and then the audition came up, I put myself on tape, and then they flew me in. I saw the show, I had a callback, and I was cast. It was just one of the easiest experiences.

2. When you first saw the show and Countess Lily were you watching and thinking, "Oh, this is my role! I got this.”?
I did do that. I don't do that very often, but I felt like it had all of the qualities that I know are strong suits of mine. It was comic, you had to dance, you had to belt, and there was a physicality & an age that was appropriate to who I am now so I just thought, "Oh, this is a good fit!".


3. Finish this thought: My Countess Lily is ____.
She is someone who always had dalliances. I think her husband was a beard, and I think there were many affairs. So, she's overly sensual and flirty, but I also think she's vulnerable. I think she absolutely loves the Dowager and feels protective of her. I also think she needs to be wild and go play. I don't even know if she loves Vlad; I think they have an arrangement that works. I think she knows he steals from her still, and she's of a certain age where it's like, well there's so few men to pick from, I'll just go ahead and lean in.

4. What felt unique to your replacement process in Anastasia?
Well I had replaced in Chicago when I did Velma, but that was a very different process because it was longer and I went into the show out of town. I worked with Ann Reinking and it was a longer process. This process was shorter. I was in a room with the stage manager and the dance captain for 10 days. They're fantastic, but I didn't see people until day 10. I think I worked with John [Bolton] for fifteen minutes one day. Then, they put your costume on, and they turn the lights on you, and you just hope you don't fall. I was just trying not to fall or hurt someone. It was a little kamikaze that way but it was fantastic. I've never worked with a nicer group of people in my life. Janet Dickinson, Mary Beth Peil, and Jennifer Smith carried me through that process. They're great women.


4. This series is about replacement performances that left us stunned. What’s a performance you saw as an audience member that left you stunned?
Tyne Daly in Gypsy. It was so raw. She allowed herself to be so ugly. There was no ego in the performance, and yet it's an ego-driven character. I was blown away. Also, anything Betty Buckley did, I have lost my mind over; and, of course, Elaine Stritch. I must have watched Elaine Stritch at Liberty twenty-seven times. It’s kind of a bible to me.

5. After being cast, how did you begin your process of building your Lily?
I read it. I tooled-around online to look for any clip from it I could find. (By the way they police Anastasia really well. There's like nothing you can find!) I worked with my husband [Philip G. Allen]. My husband was wonderful. He just kept reading the lines with me.

The main thing for me was working on my stamina because you sit around during Act I, and then in Act II you're just shot out of a cannon and you go for twenty minutes without stopping. So, it was really about getting back into shape. I was certain I would die on those stairs of the Broadhurst just going up them. That's what Broadway does, it wakes you up out of a deep sleep you don't know you're in. So now, I feel more alive and more in shape than I did before I got here and that's what I love about it. I think I've never looked better on Broadway.


6. You mentioned you were ready to come back to Broadway regardless. How did you know it was time?
I had reached a point where I wasn't being fulfilled by television, film, and voiceover work. It's not a slam against any of it, but I needed to use the other part of my talent. I felt empty and sort of lost—not fulfilled. So, that's why we made the plan to come back. When the job came, it was honestly like a miracle.

7. You, very famously, have one of my (and many people's!) favorite Tony Award performances. When is the last time you watched or heard “Shoeless Joe” from the 1994 Damn Yankees revival? [Included below]
I watched it like three weeks ago because it was on BygoneBroadway. I was tooling around on Instagram and I was like, ‘Oh, this is good! That was a great number.” It was one of my favorite times in my life—to be in that show and to do the Tony's.