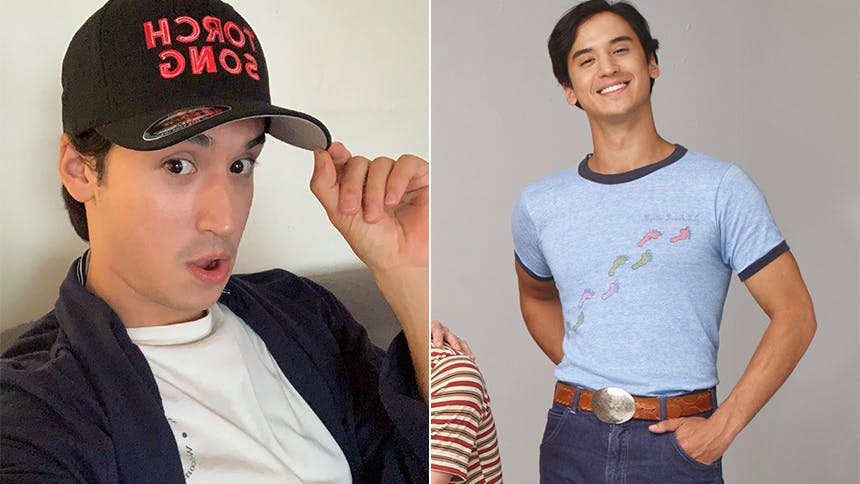 After appearing in the dance-heavy Broadway revivals of West Side Story and On the Town, Michael Hsu Rosen stars as Alan in the incredibly-moving and critically-acclaimed Broadway revival of Harvey Fierstein's Torch Song

. Alan is the charming and lovable younger partner to Michael Urie's Arnold, and he captures audiences' hearts in the second part of the three-piece play, "Fugue in a Nursery".

Scroll on as BroadwayBox talks with Michael about hustling for love in Torch Song, how Arthur Laurents shaped the performer he is today, and his leap from ballet to Broadway.

1. It’s amazing how accessible Torch Song remains. What about the play touches you the most? What do you feel yourself holding onto?
I take a lot of inspiration from the character I play, Alan. He loves with everything he’s got and without fear. In 1974, for a young gay man to love like that was radical. Alan is so brave. He inspires me to be braver in my own life.

2. What’s your favorite small moment with your onstage partner, Michael Urie, in the show?
I’m in love with Michael Urie, so it’s hard to pick just one. But, at the end of our first scene together, he and I open up a newspaper, and the paper hides our faces while Roxanna Hope Radja and Ward Horton play the next scene on the other side of the bed. Because we’re hidden, we can whisper and usually we make each other laugh. We’ve been doing the play for so long—it’s become such a comfortable, familiar moment for us to connect in private but on stage.

3. Has Harvey said anything to you that has really informed your performance as Alan?
Harvey once told me that Alan is always hustling. I got excited about hustling as an action to play in the scenes because to hustle you have to know what you want and then pay close attention to how you’re affecting the people you’re trying to get that thing from. And then when I realized that, above all else, Alan is hustling for love, the character really clicked for me.


4. What feels super special about having grown up in Manhattan?
I wouldn’t trade being a New Yorker for anything. I think when you grow up in a place as crowded and diverse as Manhattan, you’re forced to experience the complexity of the world from a very young age. And with the help of loving, thoughtful parents like mine, that exposure inspires you to be not just more tolerant and accepting of people’s differences but eager to understand and enjoy them. Not to mention the parks and the museums and, of course, the THEATER!

5. You played Jonathan Groff’s lover Jimmy in the HBO Looking film. What’s been your most memorable interaction with a Looking fan?
The summer after Looking: The Movie came out I was in Provincetown with some friends and I guess certain fans of the show felt that since I had agreed to appear in an um… intimate… scene, they were entitled to get a little handsy with me on the dance floor. I didn’t appreciate that so much and was feeling pretty uncomfortable. But then this really cute, nice boy came over and apologized for the other guys even though he didn’t know any of them. He was sweet enough to tell me how good he thought I was in the non-sex scenes, and we hit it off.

6. How did your ballet training inform you as an actor?
Ballet is really hard. Like really hard. It requires a lot of discipline and a strong work ethic. Being a student at the School of American Ballet taught me the value of time and effort. Also, dance connects you to your body—the physical awareness and control I learned from ballet has been super useful for me as an actor, particularly on stage.

7. How did your training at Yale inform you as a dancer?
To be honest, I went to Yale to get away from dance and my career in general. Because I started working at a young age, I missed out on a lot of normal kid stuff. I’m not complaining, but I couldn’t go to prom because I had to perform in West Side Story that night!

I have no regrets whatsoever about the sacrifices I made to get to do what I love, but after spending my final year of high school and then a gap year on Broadway, I found myself craving the company of people my own age—people who were smart and creative but who didn’t necessarily know who they were or what they wanted to do yet. So, I went, and I’m so glad I did. I ended up leaving halfway through my junior year to return to work, but those two and a half years at school gave me a chance to do some much needed growing up in a safe place without the pressure of being a professional. I learned a lot about myself during that time and met some great friends. If anything, I’d say that’s helped me more as an actor than as a dancer.

8. What was a piece of LGBT cinema, TV, or stage production that was really important to you growing up?
Towards the end of high school I started reading a lot of gay fiction. My favorite was E.M. Forster’s Maurice. There’s also a movie of the book starring a young Hugh Grant that I was…very into. Forster wrote Maurice when he was a young man—before Howard’s End, before A Room with a View—but because homosexuality was illegal in England for most of his life, he only agreed to have the book published after his death. The book meant a lot to me at sixteen—not only because the thought of an early 20th century gay romance set in Cambridge really did (and does) it for me, but because the history behind the book made me realize gay love stories have been happening as long as there have been love stories, they just haven’t always been told.

9. Tell us a memorable audition story:
I was seventeen and a junior in high school when I auditioned for West Side Story. It was my first professional audition, and I had never sung in public before. Needless to say, when the time came during callbacks to sing for Arthur Laurents and our producer, Jeffrey Sellers, I was TERRIFIED. I mean really, really scared. My leg was shaking uncontrollably and I felt SURE I was going to throw up. But in a stroke of serendipity, I had chosen to audition with one of my favorite songs, “Hey There” from The Pajama Game, which I later learned was also one of Arthur’s all time faves. As I started to sing, I heard Arthur lean over to his associate director and whisper (loudly), “I like this kid.” And then… he started singing along. It was an incredible moment of encouragement from a true legend of the theater. Another callback later and I was cast as Federico, one of the Sharks. Months later, during our out-of-town tryout in D.C., Arthur asked me to audition again, this time for the role of Chino, a role I eventually played during the Broadway run. I’ll never forget the love and support Arthur showed me. I’m an actor today because of him.

10. What was a tougher dance track, West Side Story or On The Town?
Well, I was a Shark. So, as tough as some of those numbers were, there were long stretches of the show when I was fully chilling backstage while the Jet boys broke their backs dancing “Cool”. In On the Town, I was running around like a maniac the whole time, playing different characters, partnering a lot, and understudying Tony Yazbeck as Gabey. By the end of that run my body was pretty beat up. It didn’t hurt too that when I was dancing in West Side Story I was a very green seventeen-year-old with all the excitement and energy of a super theater nerd making his Broadway debut.