Broadway Replacement Stars That Left Us Stunned: The Heart of Once On This Island, Darlesia Cearcy 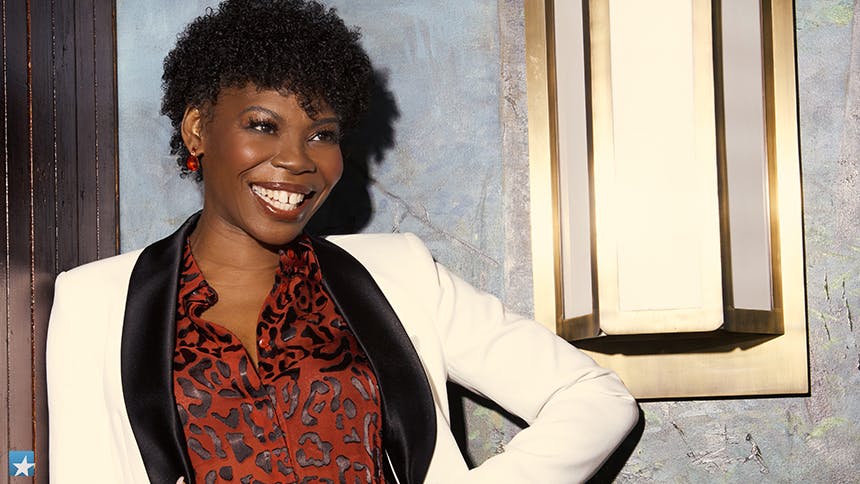 BroadwayBox and photographer Jenny Anderson launch a new photo and interview series this fall spotlighting 10 current Broadway musical replacement stars whose performances left us stunned in our seats! The illustrious group (ranging from title stars to scene-stealing co-stars) was shot at the beautiful West Village restaurant The Spaniard. Kicking off the second week is Once On This Island star Darlesia Cearcy. The alum of Ragtime, Shuffle Along, and The Color Purple gives a performance as Erzulie, the Goddess of Love, that feels nothing short of a revelation. Her "Human Heart" is the musical equivalent of how first love actually feels—and her delivery makes you feel all those feelings all over again.


1. Tell us about your journey with Once On This Island, from your introduction to the musical to taking over the role of Erzulie.
I was first introduced to Once On This Island twenty-six years ago. At the time, it was my dream show—and it still is. Because I played Ti Moune that long ago and now Erzulie, I have a different kind of relationship with it. Because I have all of the information of Ti Moune, and now, as Erzulie, I get a chance to take care of Ti Moune. There's a lovely guidance and a lovely protection, which we all hope to have, whether we know it or not.

Lynn and Stephen have created something really quite magical. The way that it's been directed and staged by Michael Arden, it really ignites something fresh and new into the piece that I don't know if I really paid attention to. It's the most wonderful reboot.

2. Finish this thought: My Erzulie is ____.
My Erzulie is ethereal. She is a transformative agent. She possesses all of the wisdom and evokes all of the kind of expansive love one could possibly think or desire. She's a healer. And I have a lot of respect for her. She's a wonderful teacher.

3. What have you learned from her?
Love has been really the center of my focus lately, so a lot about what it really means to love, and not what we necessarily assume love to be. I pray throughout the entire show, as my character and as myself. We work interchangeably with one another. I try to channel Erzulie as much as possible. And as we are working together, I listen to what she has to say. I follow the guidance that she has for me. I pray for all of the people that are in the building. I pray for all kinds of world matters. I pray for all kinds of things as love would ask you to do.


4. When this Tony-winning revival opened, you understudied Lea Salonga in the role. What was it like when you found out you’d be taking on the role full-time. How did you begin to build your Erzulie?
Well the truth of the matter is that I had started that process with Erzulie long before, when we were in the stage readings, because I was Erzulie first. I was already singing it, already doing it, and so it was just a matter of time.

When I'm approaching a character, I love building things from the ground up. There's a skeletal form that's there, but fortunately I had the trust of our director Michael Arden to really kind of explore and make decisions that I thought were absolutely necessary to the life of the character. She's quite different than what had been created. I wanted to make sure that there was as much detail and specifics as possible to her vis-a-vis what I also do vocally with her. I wanted to add another kind of dimension that helps people to kind of transcend themselves, to transform in some way, to feel like they're having an otherworldly experience. The goal is to make sure that she exhumes every aspect of beauty.


5. This series is about replacement performances that left us stunned. What’s a performance you saw as an audience member that left you stunned?
I'm going to refer to the most recent experience with Shuffle Along. That was the room to be in of any room. Every individual actor there was so remarkably committed to their craft in the classic and traditional sense of the word. There were no egos. Sometimes it's really hard for that kind of commitment to come into a room, and it did on every level. The focus, the memorization, the dedication—it was the most remarkable thing to not only to perform as Lottie Gee, but also to witness. I was on both sides of this event and both were equally as beautiful. It was a lot of hard work. I'm getting choked up because I have so much respect for that.

6. Your performance of “Human Heart” feels like its own little play. What is your internal arc with that song? What are you doing in that moment?
It's a conjuring moment. With Haitian Vodou—which is where a lot of these gods come from—there are still rituals and things that take place even today in order for people to have an experience with these gods. There’s a sort of possession that takes place to whomever is calling upon any god to come forward. With that in mind, I really work in that number to make sure that the conjuring process happens. What these two characters, Daniel and Ti Moune, are experiencing, in their youth, in their innocence is something that we all truly long for. I really want to help them have the purity of that experience. As we get older, sometimes it gets so complicated. There is a complication as far as Daniel is concerned. He's been warned and he's been told, and yet there's something between them that's higher, that connects them. Something that's better, that they can't explain, yet that they are willing to do anything for. It's palpable, and yet it's invisible. It's just something that they feel.


Rush to Broadway's Circle in the Square Theatre before November 28 to see Darlesia Cearcy’s stunning Erzulie live in Once On This Island.