Tony nominee Adam Pascal (Rent, School of Rock) returns to the big screen as The Agent in the new horror musical Alleluia! The Devil’s Carnival. Co-starring fellow B’way icons Barry Bostwick (Grease, Rocky Horror) and Ted Neeley (Jesus Christ Superstar), the film has an awesome score and a built in cult-following from the previous Devil’s Carnival movie. Check out the trailer below.


In anticipation of the new project, Pascal shared with BroadwayBox his Broadway scrapbook—filled with rare photos and untold stories. 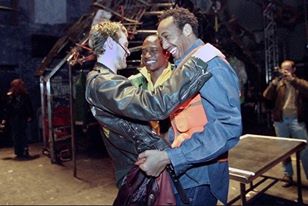 This photo is one of two moments: it’s either off-Broadway when we found out we were going to Broadway, or it’s on Broadway when we got all our Tony nominations. I can’t remember when but it’s one of those two situations. Rent was an amazing moment in all of our lives. It’s only all these years later that I’m able to see the reality of what we created. 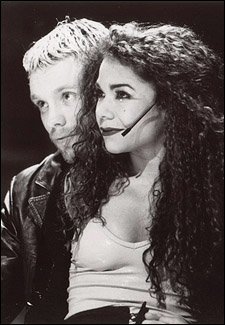 I never would have been successful and I would have never been able to do it without Daphne. It was because of her that I was able to do anything successful on stage. I fell in love with her. What you saw between the two of us on stage was real. I think that's why it was so successful, because we were crazy about each other. It really did breathe an element of truthfulness in that relationship that wouldn't have been there. 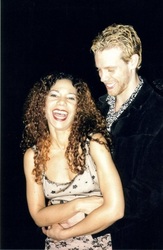 It was definitely hard [not to have her in the movie], but I understood that's how it had to be. Look, she was pregnant and it couldn't have been any other way. I think we ended up being incredibly lucky that we had Rosario in the movie and that we had Tracie Thoms in the movie. They both brought an amazing element to the movie that really infused it. It was the way it was meant to be. 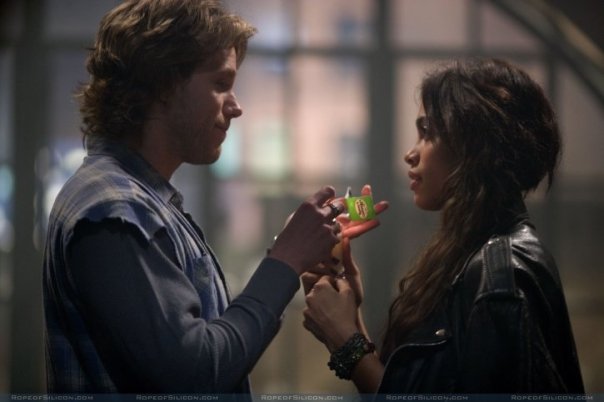 The movie was such a great extension of that whole Rent experience in general. I was so affected by the movie version of Hair and the movies of Tommy and The Rocky Horror Picture Show—these movies had a huge, huge visceral impact on me—that getting to be in a movie version of a show that ultimately had a similar effect on people was a dream. And that’s all because Chris Columbus. He wanted us and all he had to do was ask and there we were.

We're always a family and whenever we see each other, we’re right back. We’re all affectionate and loving with each other. It’s basically 20 years at this point since the show started and I still have a very close relationship with Jesse Martin and Daphne and Anthony. 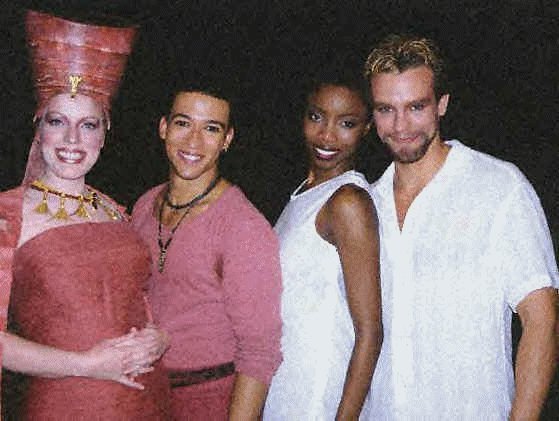 This is the only photo I have of the four of us together. There were so many amazing things that happened to me during that show: I had my first son, I bought my first house, and I settled into my first taste of a real grown up life; I wouldn't have gotten to begin that experience without that show. It also started to solidify me as having a legitimate career in musical theatre and not just being a one hit wonder. 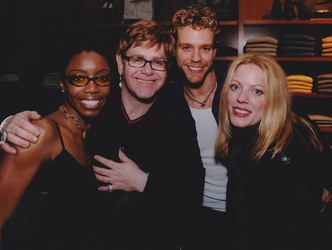 I have been a lifelong Elton John fan—and not just a fan, I mean an avid Elton John fan—so just meeting him was meeting one of my idols. It was as monumental a moment as I had up until that point.


Bob Fall [the director] and Tom Schumacher came to see Rent and they thought I might be a good fit so they brought me in to audition. I had a couple of auditions. The first one was with Bob and Tim Rice, then they brought me back again, and then a third time to work with Heather and see how we hit it off— and we hit it off right away. It was a real dream come true. 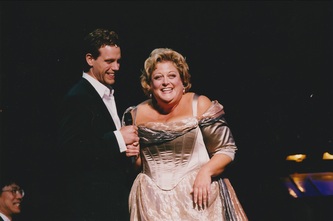 Deborah Voigt, the opera star, did a concert that was basically her and all these Broadway “leading men”, and I was lucky enough to be asked to be a part of it and sing “Elaborate Lives” with her. It was a huge honor for me as singer to be asked to sing with her. 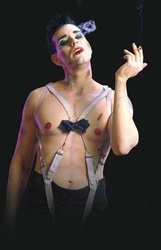 The Emcee was really the part that validated me as an actor. I remember Jesse Martin coming to the show, and the entire night as we were hanging out after he kept saying, ‘I can’t believe that was you.’ To me that was the best compliment I could have gotten. Cabaret was so terrifying for me. I wanted that part so bad and never thought they would give it to me. It was the most fun, exhilarating experience I’ve had on the stage. I really love makeup and costumes and disappearing, and to see myself like that was the most exciting thing that ever happened to me. As soon as I saw myself like that in the costume and the makeup, I knew I was going to be ok. I immediately got it. 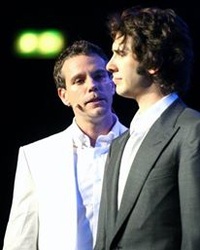 Josh [Groban] and I hit it off right away. I was really struck, obviously by his talent, but really his generosity as a person, performer and team player. He’s an overall really nice guy and you don't often see that. I go into every situation as a pessimist thinking, “Ok, this person’s going to be an asshole and I’m going to keep my distance.” And it was the complete opposite. I jumped at the chance to do it in London with Josh and Idina. It was as amazing an experience as you can imagine.


To sing a song like “Pity the Child” with a 300-person choir and 60-piece orchestra at the Royal Albert Hall, and have a completely sold-out crowd erupt at the end of it, I felt like the rock star I always dreamed of becoming. It really was one of those I’ve made it kind of moments. 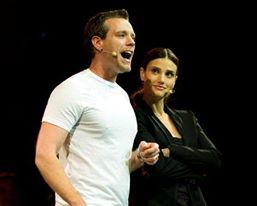 Idina and I grew up together. The history we have goes back to third grade, and we have this history of Rent, and doing Aida and Royal Albert Hall. We share the experience of performing together the night after 9/11 and having that be her first performance in Aida. We’ve really shared a lot of special, important moments in both of our careers, and I’m so thankful that I can share it with someone I have known pretty much my whole life. 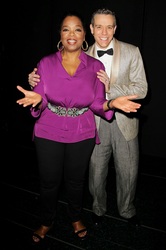 Oprah is the biggest celebrity in the world and couldn't have been more lovely and generous with her time. In my career, I’ve gotten to meet so many world-famous celebrities, but it was a real honor to perform for her and entertain her. 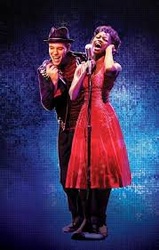 Huey was a real acting stretch, it was a chance to do some comedy and show another side of myself on stage, and in a show that was (in my opinion) underrated. I loved that score and that cast, and I loved doing that show every night. It never got dull, it never got boring, and I never got tired of singing those songs. I did it for almost a year and I think I could have stayed on for another year. 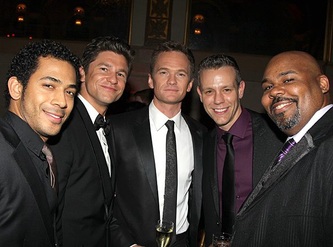 This was the after-party after the Tonys the year I was in Memphis so me and James went to the Tonys together. We had a great time, it was a lot of fun. 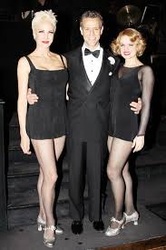 Chicago was a whirlwind. I had five days to learn the part and go into the show. I don't think I settled into that part until about half way through my run. I was just trying to remember the choreography and lines and hit my marks and stuff. But for somebody who really struggled in the beginning part of my career with feeling like I had actually earned the title of being an actor, to do roles like Chicago really helped solidify for me, “Oh, I guess I can call myself this.” If I can do a role that all these real legit actors have played, I guess I am one too. It was a part I always wanted to play because it's a real iconic Broadway role. 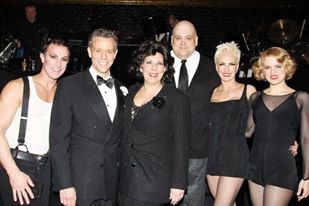 I’m very much interested in playing roles that are against type for me. At this point in my career, I’m more interested in doing Chicago or Les Miz than Hedwig or something that people can hear me sing. If you can hear me singing that score then I don't want to do it; I’d rather sing something you can’t imagine. And Chicago was a great opportunity for me to stretch myself.

Check out Alleluia! The Devil’s Carnival site to see when and where the movie is playing near you.

Newer
Introduce Yourself(ie): Get to Know The Four Hunks Of Well-Strung
Older
From Found to Heathers to Chris Miller, It's All in the Set List for Barrett Wilbert Weed