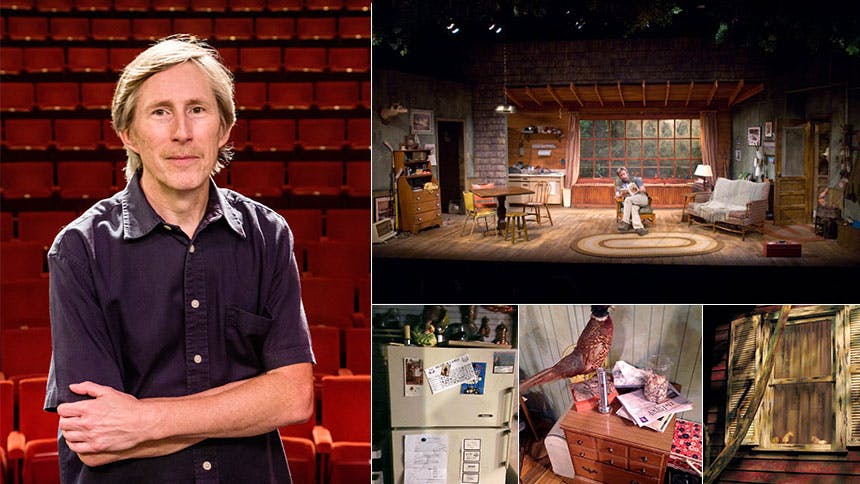 David Auburn and Daniel Sullivan (the team behind the Pulitzer Prize-winning drama Proof) reunite for MTC’s new two-hander Lost Lake. The new play is entirely set at John Hawkes’ family lake house, which he is renting out to Tracie Thoms; and in the hands of set designer J. Michael Griggs, the house becomes the show’s welcomed third character. Below, Griggs shares with BroadwayBox nine of his favorite things that you might not have noticed about Lost Lake’s eye-catching lake house.

The crew has mentioned that the set would make for a good game of I SPY. Much of the set dressing came from MTC’s ample stock. I tried to choose items that would fit into the Hogan family history as I saw it. Many little things will unfortunately remain unseen in detail by the audience but I wanted to make sure they fit the story since John and Tracie truly inhabit that space and didn’t want to send them any false notes. A few of my favorite small things:

1. In the kids bedroom stage right, which just serves as a light and sound effect, there is a picture of the Apollo 11 astronauts on the wall and a couple toy horses in the window.

2. There was an old photo album in the prop stock and we pulled a number of pictures from it to put on the set. A series shows a young girl from childhood to her prom. Two pictures show what I have deemed to be Hogan at ages 19 and 26. And one photo that shows a storm damaged interior of a house in which one of the walls is eerily identical to one in the set.

3. On the fridge there are some paper props I made up including a bowling score sheet from Putnam Lanes, an magnet advertising the aggressive legal services of the dreaded sister-in-law Debbie, and a letter from the homeowners association awarding Hogan the job to rebuild the dock on which he has sketched a plan and totaled up a materials list. 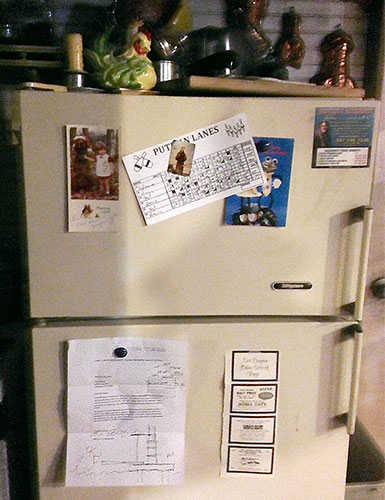 4. There are a couple axes, a tire iron, and a few other implements of malice to provide a wire of suspense to any audience members looking for trouble.

5. John Hawkes took a trip upstate to Putnam country to check out the atmosphere of the dramatic location. He brought back a local newspaper (called The Paper) and asked it to be somewhere on the set. It’s on the table near the front door anchored by a jar of shells and under the watchful eye of the pheasant.

6. I particularly appreciate the Emergency TV show board game under the chair.

7. Hogan’s neglected tools rusting away on the front porch. 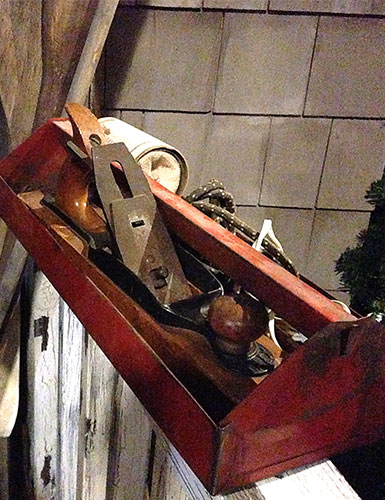 8. The fireflies were added late during technical rehearsals and the electrics, props, and stage crew came up big in making them happen on short notice. There are 5 hiding and glowing in the grasses and 1 that flies across (Tracie Thoms has named him Fred) during scene 4. There is one firefly in a jar effect that looks great but we couldn’t find the right place to insert it into the action.

9. I took a couple rides through upstate NY this past summer and stopped by some small “lost” lakes to research.


Check out J. Michael Griggs Lost Lake set and the thrilling action that takes place on it at New York City Center, Stage 1.