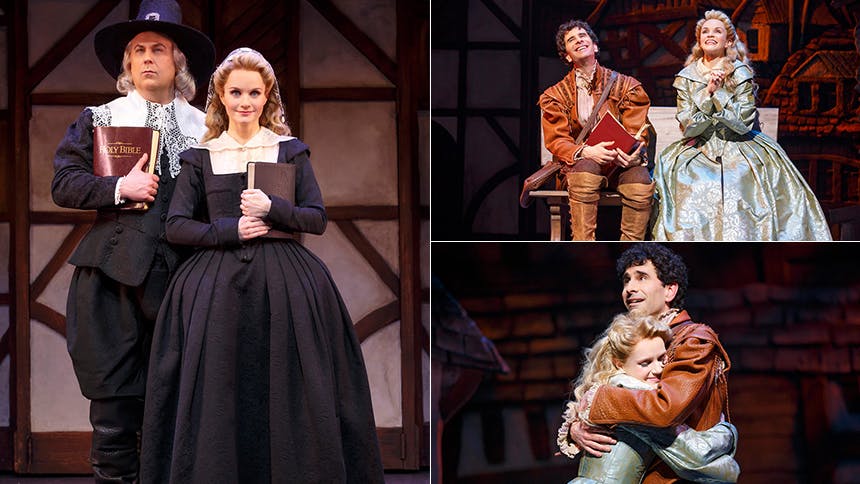 Kate Reinders has one of the most enviable jobs on Broadway. She stars as Portia, the Puritan princess who’s hot for poetry and a total Shakespeare fan girl, in the hilarious hit musical Something Rotten!. (Hello, Brooks Ashmanskas is her dad and John Cariani is her love interest. #CantBeatIt)

Below, the Gypsy, Wicked & Good Vibrations alum chats with BroawayBox about her love of McConaughey, the Glinda effect and her unlikely show twin.

1. Portia is completely crazy for the Bard. Is there someone out there that does that to you? Who makes you lose your cool?
Matthew McConaughey, but it’s not so much about his work as it is about his abs. When I meet Shakespeare in the show that is what I channel; I just tell myself, “It’s Matthew. It’s Matthew. It's Matthew.” Then I laugh, cry and fall down. I’m a very serious actress.

2. If TASTiSKANK were going to write a song about the guys of Rotten!, what would that look like?
It would probably be a love song to Gerry Vichi.
Why Gerry?
I love him. He is my best friend in the show. We were separated at birth and then got sent through a time change. He’s so cute and funny, and I could just watch him all day and pull on his little payot curls.

3. What’s something no one tells you about being in Wicked?
That you’re going to get bubbles up your nose and in your eyes and in your mouth and that your whole life is going to be surrounded by glitter for as long as you do it, plus at least another six months. It’s in your bed; it’s in your bathroom; it’s everywhere. It’s like a breakup: you can break up with Glinda but it takes double the time to get over the glitter.

4. So while you were in LA—taking a little B’way break—was there any show that you made you say, “Shit, I should have been in that” or “I wish I was in that”?
I guess people said to me why aren’t you in Kinky Boots? But I was out of the loop when I was in LA and really this is the first part that had to be mine. When I read the script, I was like, “Oh this is my part. I’m coming back—don't try to stop me.” Because [Portia] is the first TASTiSKANK; she loves poetry and it makes her hot. Who else is going to play her?

5. What current TV show do you love so much you’d want to join? And what would your new character be?
What’s crazy about me is that I watch lots of dramas and things they’d never let me on because I’m too blonde and my voice is too high, but I’m a little bit obsessed with Mr. Robot. I would imagine myself a super sleuth, amazing hacker/computer genius but who looks super cute and wears really cute shoes.