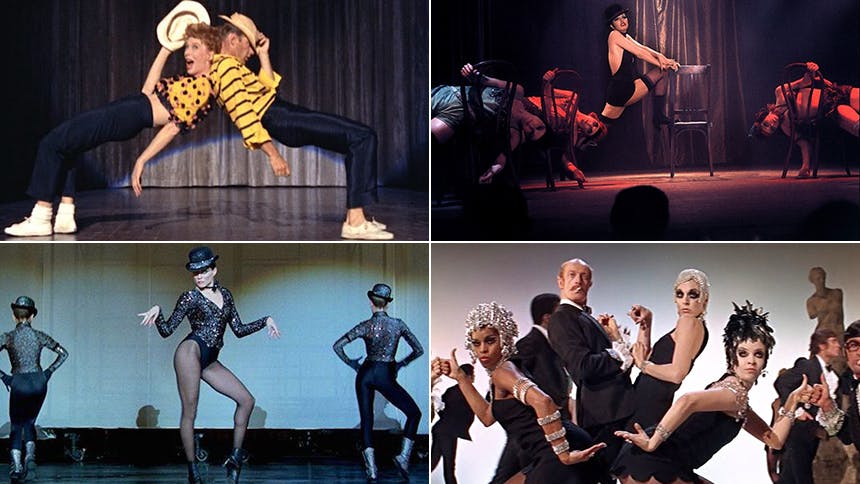 FX debuts Lin-Manuel Miranda, Thomas Kail, and Steven Levenson’s Broadway drama Fosse/Verdon tonight, April 9, at 10 PM. It’s going to be juicy, stylish, and absolutely captivating. Scroll on for a dozen (or so) videos chronically the careers of director/choreographer Bob Fosse and his partner, muse, and collaborator Gwen Verdon.


The first Broadway musical collaboration between Bob Fosse and Gwen Verdon was the 1956 Best Musical winner Damn Yankees. Gwen starred as The Devil’s seductress, Lola, and Bob choreographed. Each won Tony Awards for their work.


Gwen and Bob reprised their roles as star and choreographer for the 1958 Hollywood adaptation, and Bob danced with Gwen for this joyous number.


”Steam Heat” is the breakout musical number from the show and the film, perhaps because it’s most in the Fosse style. (Though I do love a good “Hernando’s Hideway”!) Fosse choreographed the original Broadway production and won his first Tony Award for his choreography.


This is just so sweet and their chemistry is as palpable now 60 years later.


The 1959 Broadway musical Redhead marked Bob’s directorial Broadway debut. He took home a Tony Award for choreography and Gwen took home the Tony for Best Actress in a Musical. It would be her final Tony Award win.


Following the success of Redhead, Bob & Gwen opened their next musical, Sweet Charity. Conceived, directed, and choreographed by Fosse and starring Verdon as the titular Charity Hope Valentine, the show won him another choreography Tony.


In 1969, Bob Fosse made his directorial film debut adapting Sweet Charity for the screen. The adaptation starred Shirley MacLaine as Charity and Chita Rivera as Nickie. This number got chosen because it’s included in FX’s Fosse/Verdon, but it would be almost unfair not to include Bob Fosse’s work on “The Rich Man’s Frug”.


Bob did it all on this one—director, choreographer, and uncredited book contributor—and he took home to 1973 Tony Awards for direction and choreography. Ben Vereen also won himself a Tony for this performance as The Leading Player.


With Cabaret, Bob Fosse reached his pinnacle on film. He won an Oscar for Best Director with his adaptation of the musical, which he also choreographed. Liza and Joel Grey also took home Academy Awards for their work. Fosse’s professional relationship with Liza Minnelli continued when he directed and choreographed her break-out TV special Liza with a Z


In June 1975, Fosse and Verdon opened their last Broadway musical in which she would star and he would direct and choreograph. Here’s Gwen as Roxie Hart and Chita Rivera as Velma Kelly performing a medley from the now iconic musical.


Bob Fosse won the 1978 Tony Award for Best Choreography for his work on Dancin’. His new protégée and partner, Ann Reinking, received a featured nomination for her incredible dance. The breakout moment from this show is “Sing, Sing, Sing”, performed here originally at the 1978 Tony Awards and again at the 1999 Tony Awards when the musical revue Fosse (co-conceived, directed, & choreographed by Ann) took home Best Musical.


It was tough not to include more of Fosse’s film work (like Kiss Me, Kate or My Sister Eileen) or Big Deal (the final new Broadway musical he opened and won a Tony for), but All That Jazz was Bob Fosse’s story told by Bob Fosse. Directed, choreographed, and co-written by Bob, the semi-autobiographical film has Roy Scheider as Joe Gideon (the Fosse character), LeLand Palmer as Audrey Paris (the Gwen character) and Ann Reinking more or less playing herself but called Kate Jagger—she talks about filming this number here. Ben Vereen and Jessica Lange co-star as well. It’s a trippy, sad movie musical about Broadway and fame, and totally worth a viewing.