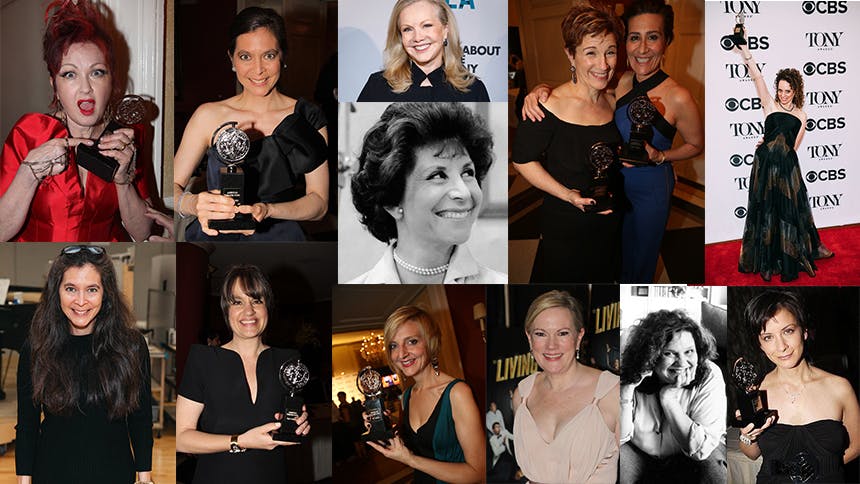 To kick off Women's History Month, BroadwayBox takes a look back at the few dozen women who have taken home Tony Awards for creative categories, such as Best Play, Best Director, and Best Score. For some fun, female-centric theatre events this month, check out the Women's Day on Broadway panels presented by Disney's Frozen and The Actors Fund and Women of the Wings: A Celebration of Female Musical Theatre Writers Volume II at Feinstein's/54 Below on March 2.


Lyricist Betty Comden has three wins here, all with her writing partner Adolph Green. She was the first woman to win this award in 1968 for Hallelujah, Baby! She went on to pick up two more Tony Awards for Best Score for On the Twentieth Century in 1978 and Will Rogers Follies in 1991.


Jeanine Tesori has the most nominations of a woman in this category with five noms, and one win. In 2015, she and Lisa Kron became the first all-female writing team to win for their score of the Tony-winning musical Fun Home.


Kinky Boots creator Cyndi Lauper made herstory in 2013 when she became the first woman to win Best Score completely on her own, without a male writing partner.


Lynn Ahrens, the brilliant theatre lyricist, became the second woman to win this award in 1998 for her and Stephen Flaherty's musical masterpiece Ragtime.


Lisa Lambert won the award for her work with writing partner Greg Morrison on the musical Drowsy Chaperone in 2006.

Frances Goodrich was the first woman to win Best Play in 1956 as the co-writer of The Diary of Anne Frank.


Yasmina Reza has the distinction of being the female playwright with the most Tony Award wins for Best Play: Art in 1998 & God of Carnage in 2009.

Bella Spewack won the very first Tony Award in this category with husband Samuel for Kiss Me Kate in 1949.


Then in 1978, Betty Comden took home the award for On the Twentieth Century with partner Adolph Green.


Marsha Norman became the first woman to win without a writing partner in 1991 for her musical The Secret Garden.


Next win was in 2006 when Rachel Sheinkin took home the Tony for the musical comedy The 25th Annual Putnam County Spelling Bee.


Lisa Kron was the latest winner in 2015 for her work adapting Alison Bechdel's family drama Fun Home to the stage.

Best Direction of a Play


Soon after in 2002, Mary Zimmerman won for the wildly creative and wet Metamorphoses.


British director Marianne Elliott (who returns this season with Angels in America) is the lady with the most Tony wins in this category. She won in 2011 for War Horse (along with co-director Tom Morris) and again in 2015 by herself for The Curious Incident of the Dog in the Night-Time.


Pam MacKinnon won her Tony Award in 2013 for helming the latest Broadway incarnation of Who’s Afraid of Virginia Woolf?

Best Direction of a Musical


1998 was a big year for female directors as Julie Taymor became the first woman to win the Tony Award for her work directing Disney's The Lion King.


Then in 2001, Susan Stroman took home a Tony Award for Best Direction as her musical The Producers set a record number of Tony wins that night.


Like in 1998, 2013 saw two ladies win the director Tony in their respective categories. Diane Paulus won the Tony that evening for completely reimagining the musical Pippin.


Agnes De Millie won the very first Tony Award in this category for her work on the big musical Brigadoon in 1947.


Gillian Gregory was the next winner 37 years later for the musical Me and My Girl in 1987.


Next we have the reign of Susan Stroman. She has won four Tony Awards for her choreography and one for direction, giving her the most Tony wins on this list. Stro won for Crazy for You in 1992, Show Boat in 1995, Contact in 2000, and The Producers in 2001.


In 1997, lifetime dancer Ann Reinking won a much-deserved Tony for her work on the record-breaking musical revival of Fosse's Chicago.


Twyla Tharp won in 2003 for her Billy Joel dance musical Movin’ Out.


The last woman to win the award for Best Choreography is three-time winner Kathleen Marshall. She picked up the Tony for her work on big revivals of Wonderful Town in 2004, The Pajama Game in 2006, and Anything Goes in 2011.

Newer
Arielle Jacobs Takes On Seven Questions About Aladdin, Aussie Life, Flying on the Magic Carpet & More
Older
These Mini Musical Moments Are Why You Need to Follow Carousel Headliner Joshua Henry on Instagram
Sign up for BroadwayBox Discount Alerts