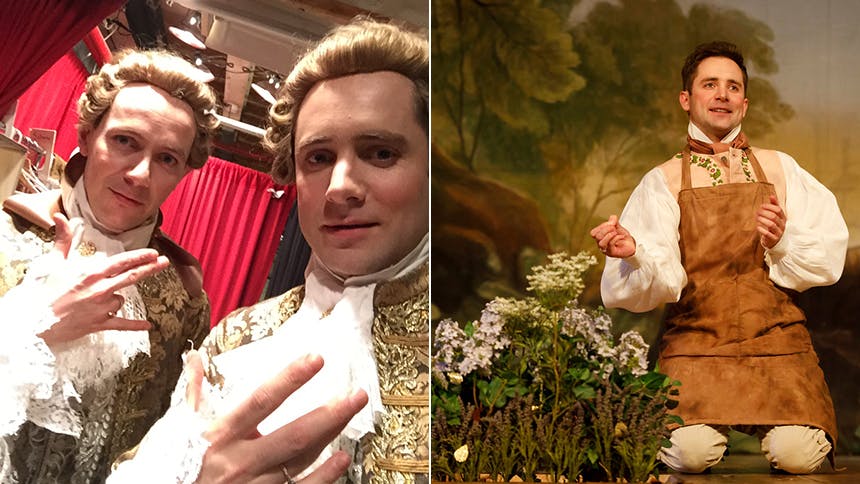 . Crane originated the title role in the play's West End run (along with the talented Iestyn Davies, who performs as the singing voice of Farinelli). Sam Crane also starred as Winston Smith in London's 1984 and appeared on the BBC series Desperate Romantics and Netflix's hit drama The Crown.

BroadwayBox got to know Sam a bit better as he told us about the joy and generosity of working with Rylance, mastering aisle ball, filming The Crown, and the best advice he received about a life in the arts.

1. What’s your pre-show like for Farinelli and The King:
I get to the theatre about 2 hours before curtain up and do quite an extensive warm up with some others in the company. We're doing a long run of a play in a fairly large theatre and we have absolutely no electronic amplification, which by the way is rarer than you might think. I think you can tell when there's amplification in theatre, maybe only subconsciously, but I think it creates a distance from the direct communication of the unamplified, live human voice. So it's very important that we're in good shape vocally, that we're able to communicate our story to the audience with ease and clarity. We were very lucky to have the wonderful voice teacher Martin McKellan with us from our first day of rehearsals, and it's his work that we continue to do every day to warm up before the show. Voice teachers can have an almost impossible job when they're brought in a week before opening and the actors can feel they're being asked to abandon all the intricate work they've been doing in rehearsals for the sake of audibility—but when you have voice work integrated into the rehearsal process from day one, I feel it's invaluable.

After our warm up we play ‘aisle ball’ a fiercely competitive game similar to volley ball. I like to think I’m pretty good at it.

2. You’ve played this role in the UK and now here. How do you keep it fresh for yourself throughout an extended run like this:
In some sense it's always fresh because every day there's a new audience with its idiosyncratic energy that joins with our energy and creates the experience of the play. But also with this company, I think we have a certain license to be free to play within the framework of our story, so there's always a chance that someone will say something slightly differently (or very differently!) or move in a different way or at a different time, which makes it easier to be "in the moment" and listen to what's happening as if for the first time.

3. What’s surprised you most about the show’s Broadway run and bringing the piece here:
One thing I find interesting over here is that the matinee audiences tend to be quite raucous and lively whereas in London they tend to be a quieter crowd.

4. What’s the best advice you received from your parents (a playwright and a director) about a life in the theatre:
I don't know if they ever gave me any direct advice but they did give me a very useful understanding and appreciation of certain Eastern European theatre makers like Vsevelod Meyerhold and Tadeusz Kantor. The best advice I've ever had about a life in theatre came from Simon McBurney when he came to do a workshop with us at LAMDA. He came into the room, and obviously all us drama students were kind of in awe of him, and he said, "So you want to be actors? I hope you know how to STARVE."

5. What was your favorite on-set memory from filming The Crown’s “Dear Mrs. Kennedy” episode:
I'd worked with Claire before and had seen the first season of The Crown, so I knew how brilliant she was, but I have to say, sitting with her doing our scene together was pretty awe-inspiring.

7. Tell us a memorable audition story:
I was auditioning for something at The Globe, and Dominic Dromgoole was reading in with me and we almost got into a fight—the scene was quite antagonistic. I have worked with him since then so I think we're cool.

8. How did you come down after a performance of 1984 on the West End? Was it taxing for you as an actor:
Because I was covered in blood and also quite sweaty by the end of 1984, I showered. By physically scrubbing the blood off I think I also scrubbed away the psychological trauma that Winston had been through. However, like Lady M, I found that there were some spots that were tricky to get out. And perhaps psychologically too there were certain remnants of paranoia, and a lack of clarity about my own identity, and existence.

9. What’s your favorite small moment with Mark Rylance in Farinelli:
There are so many small moments with him and the thing is there's a new one every day. Being on stage with someone as inventive and fearless and playful and generous as him is a dream come true.

10. What will you miss most about this character and production when the show ends its limited run:
I get to hear Iestyn Davies sing incredibly beautiful Handel arias every day, so I will certainly miss that.

Don't miss Sam Crane in 'Farinelli and The King' at Broadway's Belasco Theatre through March 25.