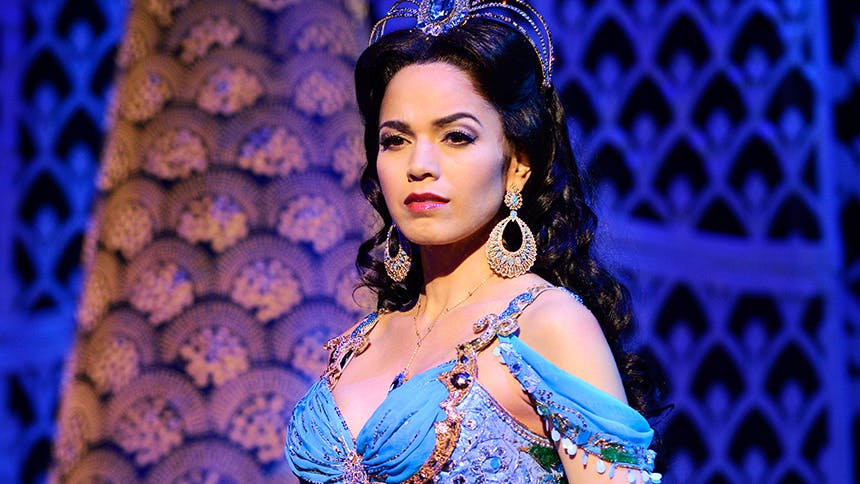 After opening the Australian production of Disney's Aladdin

, Arielle Jacobs brings her fiery, endearing performance as Princess Jasmine to Broadway. BroadwayBox caught up with the Wicked and In the Heights alum to talk about magic carpet rides on two different continents, memorable mishaps, and what her life was like Down Under.


1. What was the highlight of opening Aladdin in Australia?
So many unexpected wonderful highlights! Australia is a magical wonderland. The people are the nicest, most sincere and supportive people I've ever met. Their healthy food options are creative, locally-sourced and delicious (they don't believe that eating healthily equates to personal torture!). And their beaches are breathtaking! I spent 6 months in Australia, and it was the best time of my life. I didn't ever want to leave!

2. What’s the coolest thing you bought yourself to remember your time Down Under?
Physical items? Australian brand clothes by Sheik and Aussie-made sunglasses by Pared.
Best finds? There's this Aussie supplement company called Prana-On that makes the BEST-tasting plant-based protein powder, (coconut milk flavor!) and green vegetable powder (that actually tastes GOOD!). I still order them from Australia to use it every day!
Best memories? My favorite way that I will remember my time Down Under are from all of the amazing adventures that I went on. From climbing the Sydney Harbour Bridge, whale watching, sleeping overnight at Taronga Zoo, exploring the Blue Mountains and Byron Bay, to scuba diving in the Great Barrier Reef... I keep these memories close to my heart!

3. How is the Broadway production of Aladdin different from the Australian production?
There are only very slight differences in the choreography during the marketplace scene, so that was challenging for my brain! Once you have muscle-memory of the dancing, it's hard to remember "Go Left, then Right" when your body remembers it being the opposite direction. But the rest of the show remains the same! The off-stage traffic and quick-change areas are new in every theatre, so whenever I run offstage at the New Amsterdam Theatre I have to remind myself where to go for my next quick change...I had a split second of confusion when I'd exit the stage during the first couple of shows, but now it's getting better each day.

4. What did your brother Adam (Broadway's original Aladdin) say when you told him you were Broadway’s next Jasmine?
He was so happy! He said, "Now I get to finally see you do it!", since he didn't get to see me as Jasmine in Australia. I can't wait for him to see me on Broadway!


5. How did it feel the first time you flew on the magic carpet during “A Whole New World”? How would you describe that to someone?
It felt like I was floating. The carpet ride is so smooth, and singing this iconic Alan Menken song while soaring above the audience feels so magical. It's still my favorite part of every show.

6. In your 54 show, you talked about overcoming bell’s palsy. How do you think that experience made you a stronger performer? Did it change anything about how you approached your career?
When half of my face was paralyzed, I didn't think I'd ever perform again. I didn't think I'd ever be able to fully smile again. I've heard it said that you don't really appreciate what you have until you lose it. During those three months, it made me realize how important my self-expression is, and also fueled my desire to perform and sing even more. When my muscular function returned, and my face could move again, I was a stronger performer because I knew how much it meant to me. It gave me a stronger drive and motivation to keep doing my best at every audition, despite rejection, no matter what.


7. What’s been your most memorable onstage mishap?
I have an unfortunate track record of slipping and falling onstage at the most inopportune moments. It's happened twice during my final bows. The first time was in Disney's High School Musical, when I slipped during my curtsy and fell flat on the stage. Then my Troy (actor John Jeffrey Martin) proceeded to throw himself on the floor during his bow, just to make me feel better...and it worked ;) While I was in Australia, I slipped during my curtain call bow again. This time it was because my wedding skirt costume got caught under my foot. But getting back up and standing tall after falling on your face is what it takes to be a true Princess!

Get yourself over to Broadway's New Amsterdam Theatre to see Arielle Jacobs as Jasmine in Aladdin.