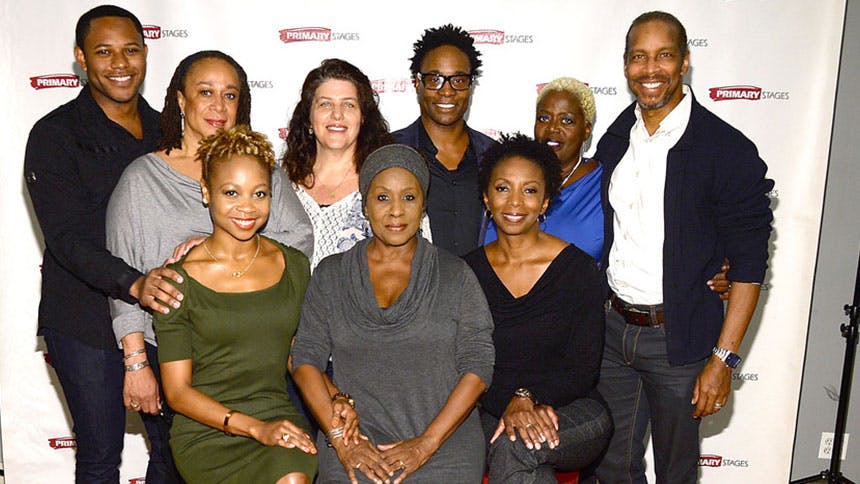 Tony Award-winning actor Billy Porter (Kinky Boots) shines as a playwright with the new family drama While I Yet Live. The world premiere play, produced by Primary Stages at the Duke on 42nd Street, focuses on one family over the course three different Thanksgiving Day dinners and speaks about Porter’s own experience growing up gay, black, Christian and a survivor of abuse. In a statement about the show, Porter says, “This play is a love letter to my mother, my sister and the women who raised me.” When we caught up with Porter and the cast, we asked each of them to tell us about a tradition the women in your family have that you look back fondly on.

“The thing I loved the most was the preparation of the food. I never took a cooking class or knew that I knew had to cook, but I did just from being in the room. It was a communal family activity, everybody was just there pitching in, and so you subconsciously learned how to take care of yourself. Then when I got to New York and was living on my own, I would just put things together and my friends would be like, ‘where’d you learn to cook?’ And I’d say, ‘I actually don't know.’ I learned through osmosis.”

“My mother—God bless her soul—during the summertime would send my brother and I out to the fish market to get blue crabs, and we’d get a couple dozen of these huge blue crabs; we’d have so much fun bringing them home—they’d stick their claws through the bags and we’d get scratched in the legs. It was exciting. And sometimes they’d get loose in the house and we’d chase after them. Then my mother would take the crabs and put them in a big, big pot with this seasoning, water and beer. And she would line the table with newspaper, and we’d all just eat crab for hours and hours and hours, telling stories and laughing and having a great time.”

“My favorite tradition is the long prayer before Thanksgiving dinner. I come from a good Los Angeles family full of preachers and preachers’ daughters and preachers’ grandmothers and everybody starts preaching. It is usually a good 15 minutes of prayer because everyone goes around and says what they are grateful for.”

“It would have to be Thanksgiving, which is ironic since that's what this play follows. That’s when we are all home in Detroit, and there is a ritual of getting the dinner prepared—I’m not much of a cook so I do a lot of the chopping—and the laugher that happens during the day.”

“I grew up with nothing but women—my grandmother and my mom, they are my rock. We don't have a tradition because we are so intertwined with each other, but one thing we do is eat peanut M&Ms after everything is done. We talk and laugh and have a ball over those peanut M&MS it’s one of the things I miss most.”

“The women in my family were great at cooking for parties and big events, and the one big thing at every event was mom and her extra long prayer. Extra long, extra long, extra long to one point my father said, ‘please Georgiana, the food is getting cold.’ So now the younger women, we do the short prayer.”

“Every Thanksgiving we sit around the table and talk about whether mustard greens or collard greens are better. My aunt and my mother, who have both passed on, would have the argument every Thanksgiving; so there would always be a bowl of mustards, collards and a mixed bowl because that was the only way there was civility in the house.”

“Well it’s been a long time living with all my family around me, but the tradition would be at Thanksgiving, my mother and my two aunties would do the cooking and rotate who would do the turkey every year. That was their tradition; and for the kids, it was all about somebody’s turkey we liked better than somebody else’s. ‘My mom’s is better.’ ‘No wait, your mama is better than mine.’ ‘Your mama was dry this year.’ It was a back and forth. So it was a kids’ tradition on top of the mothers’ tradition.”

See all the drama this family is cooking up in ‘While I Yet Live,’ running through Oct 31, at the Duke on 42nd Street.