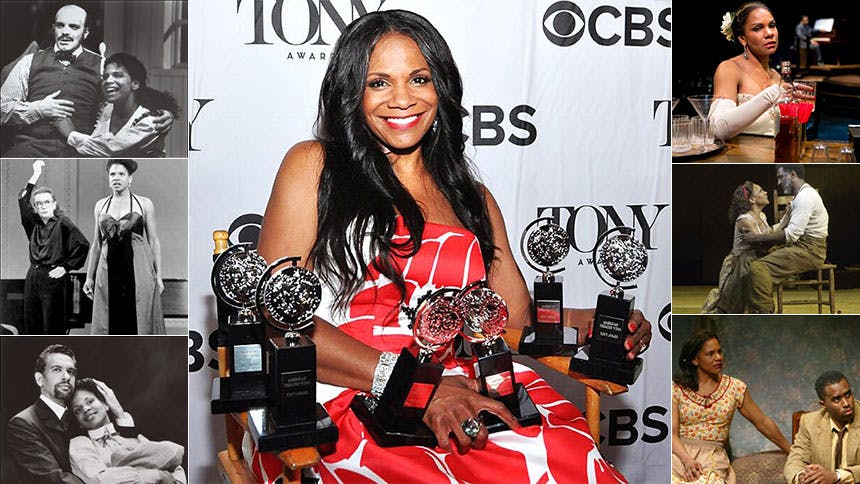 Do you realize right now you have a chance to see Broadway history in the making? It’s true. If you head over to Circle in the Square Theatre, you can experience Audra McDonald as Billie Holiday in Lady Day at Emerson's Bar and Grill; the performance won McDonald a historic sixth Tony Award, more than any other performer in Broadway history. Below, BroadwayBox looks back on those six roles and her six Tony night speeches.


In 1994, Audra Ann McDonald (that’s right, middle name and all) appeared as Carrie Pipperidge in Lincoln Center’s acclaimed revival of Rodgers & Hammerstein's Carousel. Check out how beautiful this production was, enjoy "The Carousel Waltz” because it’s magical and get ready for Audra’s solo “Mr. Snow” at 2:32 mark.

After taking home the Tony, Audra McDonald (no Ann) co-starred beside Zoe Caldwell as a fiery opera student named Sharon Graham in the 1995 production of Terrence McNally’s Master Class. Audra, Zoe and the play all won Tony Awards that year.


Best part of this speech: Her reaction is the best the six. It begins at 2:38 mark and it’s just so wonderful and genuine. Let’s give her another one soon.


What is there to say about Audra McDonald’s performance as Sarah in Ragtime, other than that cast recording inspired an entire generation of theatre fans. She just went for the jugular with the knockout tracks “Your Daddy’s Son,” “New Music,” “President,” “Sarah Brown Eyes,” and of, course the ultimate sing-along song “Wheels of a Dream”—the “California or who knows where” line and the “gleam” at 2:53 are worth the Tony alone.


Best part of this speech: Other than the standing ovation and beating out little Anna Kendrick?! When she talked about “the love and other things” in the Ragtime cast. What are the other things? Has the mystery ever been solved?


Kenny Leon’s first A Raisin in the Sun was historic: Phylicia Rashad became the first African-American woman to win Best Actress in a Play, Sean Combs made his Broadway debut, they made a TV movie out of it (above) and Audra won Tony number four.


Best part of this speech: We love the change of look: no white/cream dress and the beautiful curly hair. Get it girl.


From when the revival was first announced, people were saying Audra McDonald would take home Tony five for starring as the coked-up floozy Bess in The Gershwins’ Porgy and Bess—putting her in a class with Angela Lansbury and Julie Harris. And she did.


Best part of this speech: It began with a lot of tears and a great story about being a little girl who found the theatre, but the best part is the shout-out to daughter Zoe.


How in the world does the woman who just sang Bess make herself sound just like Billie Holiday?! Give her a Tony. And this Tony would be number six, making her the first person to win six and the first to win in every acting category.


Best part of this speech: The tears and the standing ovation happened before, so they don’t win this one. The dress is pretty amazing, but we already called that out during Tony number four. So that means the best part of this historic Broadway speech is when she thanked the women whose shoulders she stands on.

See the mega-talented Audra McDonald in ‘Lady Day at Emerson’s Bar & Grill’ at Circle in the Square Theatre through October 5.