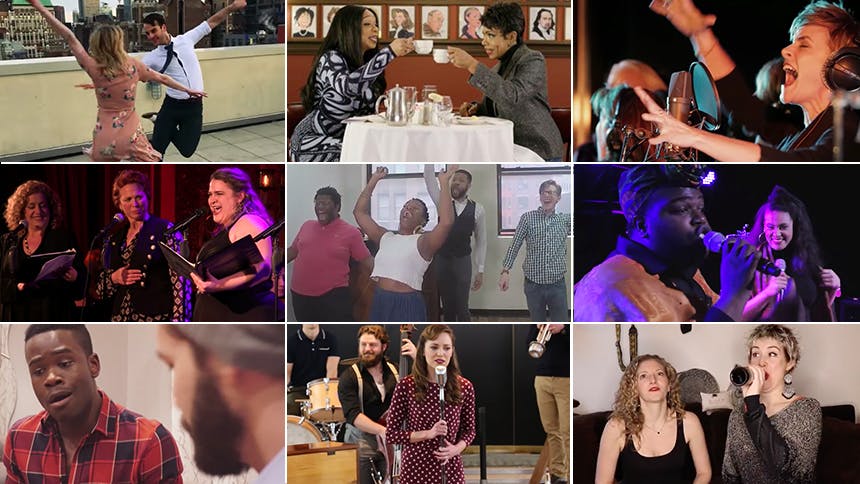 It’s been a hot minute since we did a proper video round-up, so here’s what you’ve been missing.


Ultimate 🙌 🙌 moment: Laura Osnes shows Broadway a whole other side of her voice in the musical Bandstand, and we're in 😍 😍. I lived my entire life from 1:10 to through the end. My god, that end note!


Ultimate 🙌 🙌 moment: Jenn Colella legit soars in Come From Away. Her big song “Me and the Sky” is the showstopper of the entire evening—you leave the theatre saying, "Damn that number!" See for yourself, and get ready 'cause that voice truly takes flight beginning at 2:47.


Ultimate 🙌 🙌 moment: The disco musical that made Broadway history when it never opened returns to NYC for one-night-only on March 13, and BBox went into rehearsal with the cast. Waitress’ Anastacia McCleskey sang “Get Your Show Rolling”, and we LIVED our best lives. How do you not throw a praise hand up at 2:59?!?!


Ultimate 🙌 🙌 moment: Wicked star Sheryl Lee Ralph appeared on Miss New York's (aka Tiffany Pollard) new web series to spill the tea on drinking her THC, being the ultimate screen mom, and growing up curvy. More importantly, how does Sheryl not have a Sardi’s caricature yet?

Ultimate 🙌 🙌 moment: A Bronx Tale’s Bradley Gibson performs the sexiest, most soulful version of this classic The Music Man ballad I’ve ever heard. Just wait ‘til he gets to “and there was music” sections at :58 seconds in and again at 2:03. It’s my new favorite version of this song.


Ultimate 🙌 🙌 moment: Three big, rich female voices singing a beloved 1776 song normally sung by three men—what could be better? I watched it three times on repeat. The first time I nearly fell off my chair at 2:55.

The Cast of Paramour Brings La La Land to NYC


Ultimate 🙌 🙌 moment: I live for the music and magic of La La Land and Bret Shuford did a great job bringing that beauty and joy to the streets of NYC. Also Ruby Lewis always gives me major Emma Stone vibes so her doing “Audition” and the dance break with Ryan Vona was EVERYTHING for me (starts at 2:10).

Watch Out Ivy Lynn, Ruby Lewis Is Coming For Your Gig


Ultimate 🙌 🙌 moment: While we are talking about Ruby Lewis, can we take a moment for her cover of Smash’s anthem “They Just Keep Moving the Line”? She slayed that song and made it completely her own. All those big notes you love begin at 1:45.

Juwan Crawley & Nora Schell Serve You All the Summer/Streisand Realness


Ultimate 🙌 🙌 moment: These former Spamilton stars have serious pipes and some serious star quality. If you're not dancing by 3:20, you might be dead.

Lauren Molina Makes It Through Broadway’s Most Awkward Interview Series