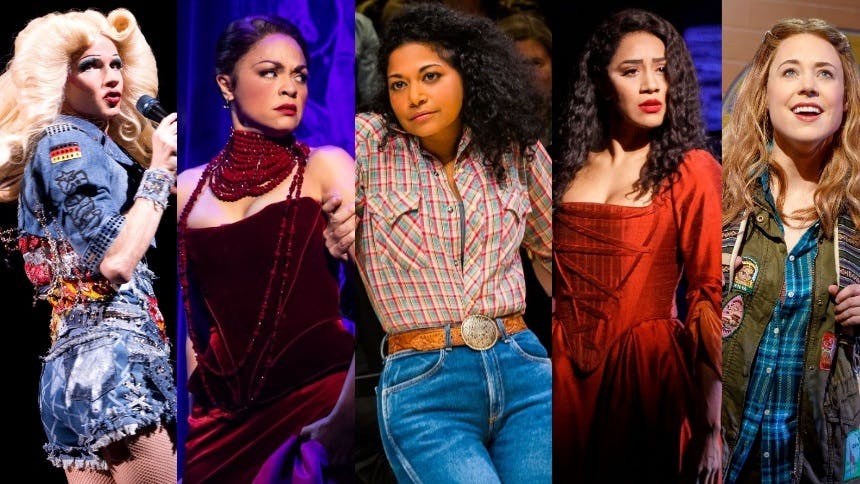 folklore is here! The terrific Taylor Swift recently released her 8th album folklore which she explains on Instagram in a recent post that the album's songs are stories of her own but from others too:

In isolation my imagination has run wild and this album is the result, a collection of songs and stories that flowed like a stream of consciousness. Picking up a pen was my way of escaping into fantasy, history, and memory. I’ve told these stories to the best of my ability with all the love, wonder, and whimsy they deserve. Now it’s up to you to pass them down. folklore is out now. (Camera Emoji): Beth Garrabrant

We got to thinking, "it would've been fun" to imagine if these songs were from the perspective of some of our favorite musical theatre characters. Taylor's lyrics really paint such marvelous, detailed pictures which helped us find "the 1" possible theatrical perspective for each of these songs.

Spoiler Alert: If you haven't seen Mean Girls the musical or the film, maybe scroll down to the next song. This tune immediately made us think of our heroine Cady Heron when her and the grool Aaron Samuels get into a fight at her house party.

Swifties have been putting clues together that "august," "betty" and "cardigan" are the three songs Taylor recently mentioned are part of a trio of songs exploring the perspectives of the three members of a love triangle. For a deeper dive, head to Entertainment Weekly for their detailed investigating! Well for this article, what if it was a modern day Eliza Schuyler? Think of Hamilton as a busy writer only free on weekends! This could have been "Burn."

What if instead of "a house in Mount Kisco," Betsy Nolan and Jack Singer end up in Rhode Island? As Betsy sings in "Anywhere But Here" she wanted an old fashioned house with her love Jack and their future family. What if they had the new start in that house Taylor sings about after Rebekah!?

We've got a breakup tune and Catherine Parr "has seen this film before." She might not have liked the ending of the marriages of Henry VIII's other wives!

Again - a bit of a spoiler alert if you haven't seen the Moulin Rouge musical or film. Scroll on down to the next song! This song could easily have been sung by Satine to the Duke. Listen to those lyrics for something that might remind you of "Come What May"!

"mirrorball" - a Hedwig and the Angry Inch's Hedwig story?

We love the idea of this being sung by Hedwig in her highest heels shining just for us. This splendid tune reminds us of something that could have fallen right into the incredible Stephen Trask score as part of Hedwig's journey to stardom.

It's a stretch but if Moritz and Ilse lived in Pennsylvania, they could play pirates like they used to do. Moritz could save Ilse from her unhappy home life. This tune is "just like a folk song" that you would hear in Spring Awakening.

As part of that love triangle trio of songs, this tune is possibly sung by the person who the person singing "betty" is having an affair with. Still caught up? Cool. Another spoiler alert if you haven't seen, listened, read or are not familiar with Hamilton - scroll along! If you're well acquainted you can see why this would be a match for an affair during a "summer in the city."

"this is me trying" - a Next to Normal's Natalie story?

Hey - we can picture Natalie singing this to Henry any day about trying to open up to him. He likes her so much but she is closed off as they sing in "Perfect For You." After "Hey's #1, 2, and 3" - we can imagine Natalie singing "this is me trying" right back to Henry.

This could have fit into Act 2 of Waitress no problem. Jenna and Dr. Pomatter had an illicit affair filled with "clandestine meetings" of their own without Earl or Mrs. Pomatter knowing.

When you think of epic love stories, you have to think of Orpheus and Eurydice. A modern day Eurydice could have sung this to Orpheus - singing of the invisible string that tied her to him drawing them together. The Taylor lyric alone "Hell was the journey but it brought me heaven." You tell us this couldn't be one of the sad songs Hermes warned us about in Hadestown.

Velma Kelly's own husband Charlie cheated on her with her sister Veronica! Based on the lyrics to Chicago's famous "Cell Block Tango," audiences might also think "there's nothing like a mad woman" considering what ended up happening to Charlie and Veronica.

This song's lyric paints a picture of a soldier's service during a war. Top of mind was Donny Novitsky and his life coming home from the war. The things that Donny saw happen to his close friends and the things he personally endured during wartime stayed with him long after.

Her "name is ELIZABETH Schuyler..." so who else could a potential Alexander be singing this song too. We wonder if Peggy called her Betty! If it was sung from Alexander's perspective, "the worst thing that I ever did was what I did to you." Listen to this track and then listen to "It's Quiet Uptown." The parallels! We see you gardens in both songs.

Many a new day may come for Laurey but she has a friend in Curly. "Danger is near and it's just around the corner" is something she could have sung about Jud Fry. "All these people think love's for show..." is almost like a nod to the lyrics Laurey and Curly sing in "People Will Say We're In Love."

Eponine's dreams were dashed when Marius and Cosette fall in love. "Hoax" is a wallop of a breakup song and is so heartbreaking. These lyrics are about a New York love story but if it was France it could have been sung by Eponine somewhere where "the pavement shines like silver."