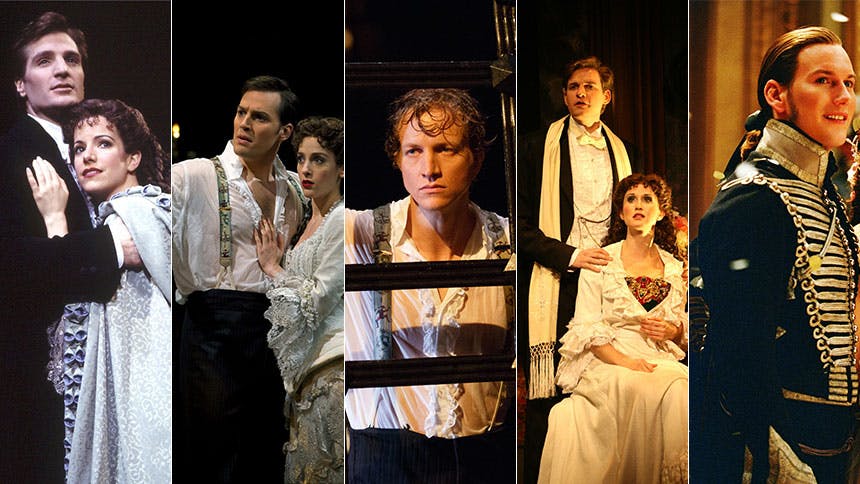 At the center of the iconic musical Phantom of the Opera is a love triangle between opera singer Christine Daae, the mad genius Phantom that lives in the opera house and Raoul, the Vicomte de Chagny. While both men work to win the heart of Christine, there's really no contest as far as we are concerned—it's all about Raoul. Not taking into consideration the Phantom sequel Love Never Dies, Raoul is one of the most romantic boyfriends on Broadway. Below, BroadwayBox counts down six moments in which Raoul proved his love to Christine and made us wish he was real...and our boyfriend. [Spoiler alert for those who have never seen 'Phantom'...also why have you never seen 'Phantom'?!]

The character of Raoul makes a strong first impression during “Think of Me" when he realizes his childhood crush, Christine Daae, is the singer performing. Then he leads the standing ovation for a girl he hasn't even seen in a decade.

“She may not remember me, but I remember her.” He's just so humble and so romantic for aristocracy.


You know this Vicomte is serious when he gets a strange note and immediately arrives at the opera house outraged and grief-stricken. Forget manners and propriety, Raoul demands answers about Christine’s disappearance.

Then it's a hop, skip and a jump to "All I Ask of You." Picture it: it's the end of Act I and Christine is shaken, so Raoul makes her feel better by singing the most romantic love song ever written by Andrew Lloyd Webber.

What’s sexier than a brave man willing to dive headfirst into danger for the one he loves? Without a moment of hesitation, Raoul rushes to the Phantom’s lair to rescue Christine after she is kidnapped.

Safety be damned! He's in such a hurry to save Christine he forgets to keep his hand at the level of his eye.


Soon, Raoul finds himself faced with imminent death. And what does our hero do? He just begs Christine for forgiveness; then, he utters what he thinks may be his last words to her, “I fought so hard to free you.”

As far as last words go, "I fought so hard to free you" is definitely up there.


Finally, let's talk about the unseen moment of pure love in which Raoul must give his blessing for Christine to go back into the liar (after they escaped) and say a final goodbye to Phantom.

The Raoul subtext is all very, "It's OK baby, I trust you guys to say goodbye."


See these moments and more live now at Broadway's 'Phantom of the Opera,' running at the Majestic Theatre.

The Phantom of the Opera
Best Priced Tickets
Newer
Six Things Most People Actually Do on a First Date
Older
On The Look Out: Five Phenomenal Performers To Watch Out For
Sign up for BroadwayBox Discount Alerts