On The Look Out: Five Phenomenal Performers To Watch Out For 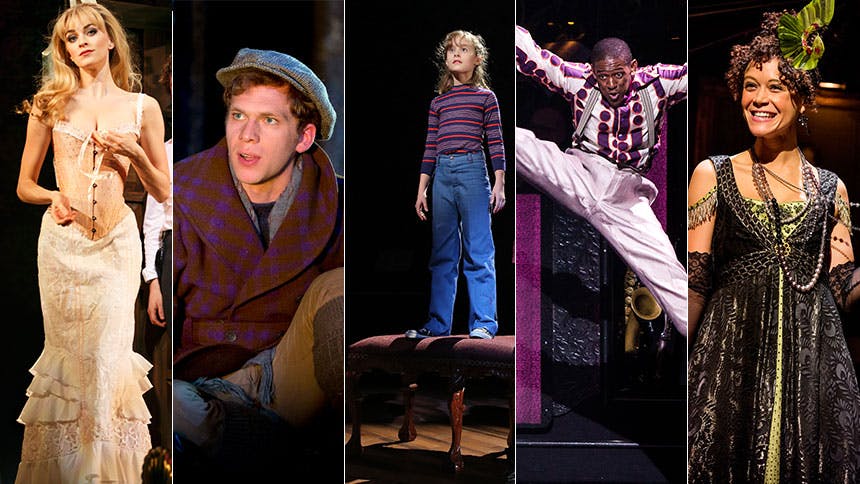 Two of the greatest thrills that can occur at the theater are seeing a theatrical legend perform in-person and witnessing the debut of a future stage star. Below, we celebrate and honor the latter. BroadwayBox highlights five up-and-coming stage actors from the fall season who are giving breakout performances.

The Sidesplitting Ingénue: Lisa O’Hare makes a dazzling Broadway debut as the social-climbing beauty Sibella Hallward in the new musical A Gentleman’s Guide to Love & Murder. O’Hare’s clear soprano and perfect comedic timing in the numbers “I Don’t Know What I’d Do” and “That Horrible Woman” can’t help but bring to mind Kristin Chenoweth’s original performance as Glinda in Wicked. It’s no wonder the British actress is one of only two original company members (Tony winner Jefferson Mays being the other) to appear in the Broadway mounting of Gentleman’s Guide.

Fun Fact: O’Hare was a trained ballet dancer before making the leap to musical theater. On the London stage, she starred as Mary Poppins in Mary Poppins and Eliza Doolittle in My Fair Lady.

The Angsty Scene-Stealer: It must not be easy shouting directly in the face of Tony and Emmy winner Mary-Louise Parker, but the audience reaction is palpable as Brian Cross has his big meltdown in the new Broadway play The Snow Geese. Cross makes his Main Stem debut as Arnold Gaesling, Parker’s younger 18-year-old son, and arguably the most mature character, in the World War I family drama. Cross’ complex, well-drawn and brooding performance is hard to take your eyes off of (even when his co-stars include Parker, Victoria Clark and Danny Burstein), and so audiences hold their breath in anticipation for this good son to finally snap.

Fun Fact: Cross directed and acted in a college production of Pig Farm, where he performed on all-fours as a pig; later, before making it in New York, he worked at the stuffed-animal company Squishable, which produces plush pigs.

The Child Prodigy: Sydney Lucas gives a starring performance wise beyond her 10 years in the Public Theater’s off-Broadway musical Fun Home. Lucas is the youngest of three actresses who plays lesbian graphic novelist Alison Bechdel in the biographical new musical, and as a tomboyish eight-year-old, Lucas’ performance is the cornerstone of this heartbreaking play. What’s most astounding is how Lucas seems right at home sharing the spotlight with theater greats Michael Cerveris and Judy Kuhn, and how Lucas’ solo numbers, most notably “Al for Short” and “Ring of Keys,” pack the biggest emotional punch of the night.

Fun Fact: Lucas’ brother Jake is also an actor, currently appearing in A Christmas Story, and together they co-star as fraternal twins in the starry, upcoming Peter Bogdanovich movie Squirrels to the Nuts.

The Tap Dance Wiz: There are not many dancers on Broadway who can stop a show with just their feet, yet that’s exactly what professional hoofer Jared Grimes accomplishes nightly in the new musical After Midnight. Grimes is no stranger to the stage, yet the Duke Ellington revue marks the first time Broadway audiences have the opportunity to see his surplus of talents. Grimes’ major moment, a solo tap routine to “Tap Mathematician” and “It Don’t Mean a Thing,” comes late in the 90-minute show, but it’s well worth the wait.

Fun Fact: Grimes once brought his tap shoes to a nightclub and tapped in the middle of a dance floor. He’s also danced with Mariah Carey, Common, Salt-n-Pepa, En Vogue, Busta Rhymes and the Roots.

Amber Gray (Natasha, Pierre and the Great Comet of 1812)

The Deliciously Wicked Villain: It must be great fun to play a glamorous, manipulative villain on stage, so it’s no wonder Amber Gray looks like she’s having the time of her life as scheming socialite Helene in the decadent off-Broadway musical Natasha, Pierre and the Great Comet of 1812. As the “slut” Helene, Gray is like the Victoria Grayson (Revenge) of this interactive, rock and roll retelling of War and Peace, and Gray’s big song “Charming” is the most satisfying solo number of the night. Sometimes it pays to be the bad girl.