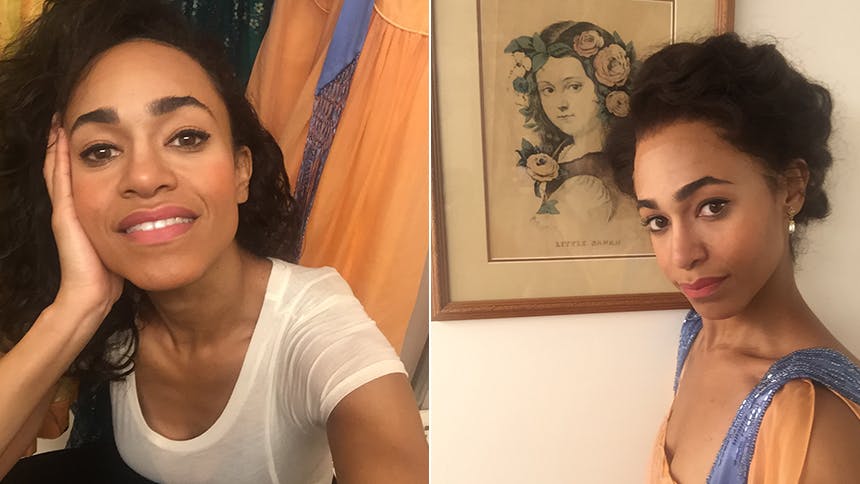 . The play looks at one British family during two monumental nights in their lives, 19 years apart. In 1919, Joan is a beautiful family friend who captures the heart of both Conway brothers; in 1938, she's an unhappy wife to Robin Conway and a shell of the vibrant young woman she once was.

BroadwayBox caught up with Cara (who has a celebrated, varied stage career in Canada which includes leading several plays at the Stratford Festival) to talk about her character's arc, taking projects you're passionate about, and a botched musical theatre audition.

1. How did this revival Time and the Conways first appear on your radar?
My agent sent me a breakdown and I was really excited to see Rebecca Taichman's name on it. Especially since she had just won a Tony for Indecent and I had heard so many wonderful things about her. It was also my first time getting to audition for at the Roundabout Theatre Company.

2. Who was your first call when you found out you’d be making your Broadway debut?
The first person I called when I found out about my Broadway debut was my partner Justin Ellington—he's a composer/sound designer and had worked on Broadway before so it was exciting to be sharing that kind of experience with him. Then I called my family and I also called my good friend Robert Blacker, a well-known dramaturge and a really big supporter who helped me when I first moved to New York at the beginning of the year.

3. What jumped out to you most about Joan when you read this?
Joan imagines she is a modern day Cinderella, the plays she's seen in London all have to do with romance and marrying someone that will improve the character's life. She wants to be important. One of the first lines she says in the play is "if I were a man I'd want to be very important." Due to her circumstance, she feels that she is in capable of creating that importance on her own, and so she attempts to get it through Robin, who is a character seemingly filled with opportunities and possibilities. If she lived in a different time maybe she would have tried to be important through her own abilities.

4. Your transformation between 1919 and 1938 is quite remarkable. What was your process to create those two Joans?
Joan in 1919 is new to the world. She's in her early 20s and she's playful and funny and hasn't really been beaten by the world yet, nothing is set in stone for her. I made her light, bubbly, effervescent and dreamy—there is a spring in her step. Her problems float away (or are easily hidden) because they aren't that heavy. Joan in 1938 are all the wonderful things that she had in 1919 but they have a rotted. She's had children, her body has changed, she's bent over in care of little Conways who are now her only connection to the family. This Joan is bent over trying to cover her heart from further pain and disappointments.

5. What’s your most memorable audition story?
When I first got out of theater school, I had an audition for HAIR and I hadn't trained to do musical theatre (I don't quite know how I ended up in that room). But I went to the library and I picked up a songbook and I can bought a CD of the songs. I went in and botched the whole thing so badly. I remember at the end of it, while I spoke to the assistant, the director pushed my headshot slowly past all the other paper piles on what seemed like the longest wooden table there ever was. The paper made this shushing sound until its movement died at the edge of the table. He had to stand up to do this.

7. What’s the biggest difference between theatre in Canada vs the States?
Biggest difference between theatre in Canada and here in the US would be the events and the people who come. Opening night was amazing, and I'm still surprised at who was there, so many people that I have read about or admired from afar. New Yorkers also know their theater, my new friends sing Hamilton to me all the time. It's the best.

8. Which role was hardest to shake off at the end of the night?
Joan was harder to shake off than I thought. I have had roles that I need to let go of at the end of a show. I didn't realize how much Joan I carried with me until my first day off after opening. I started to think about having free time for other things and I could feel my body letting go. I was surprised by it, but my friends could tell. Joan is an impulse crafter, I just kept making things/gifts. She's always busy as she says.

9. What do you know now about the business that you wish you knew when you were first starting out?
What I wish I knew about the business before starting out? That I am a business owner. That I have more control over my business than I think I do. It's very easy to feel like you need to be invited or given an opportunity. It's always better to do a project that you're passionate about than just getting work.

10. What’s a movie you love so much you know every single word?
A movie I love would be Throne of Blood by Akira Kurosawa.

Don't miss Cara Ricketts in 'Time and the Conways' at Broadway's American Airlines Theatre through November 26.