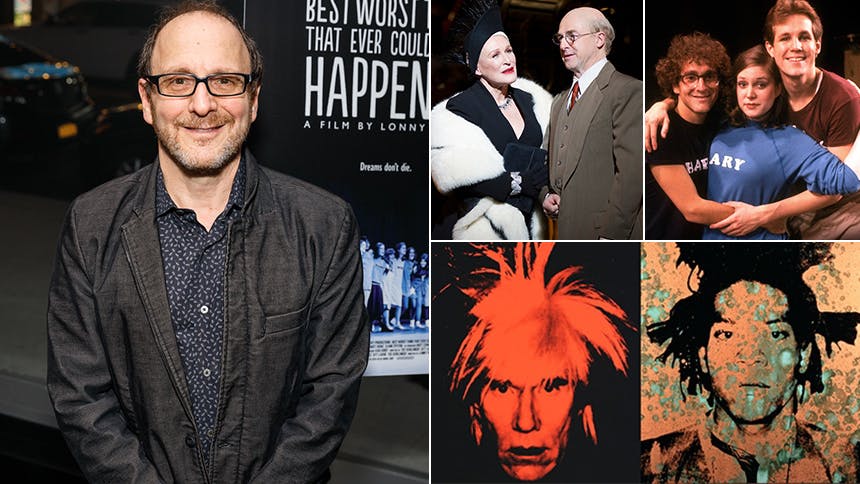 Emmy and Obie Award winner and Tony nominee Lonny Price is having quite the moment right now. His Merrily We Roll Along documentary, Best Worst Thing That Ever Could Have Happened, is one of the hottest films in town, garnering rave reviews and serious buzz from theatre and film insiders. This spring, he returns to Broadway as director of the Sunset Boulevard revival, starring Glenn Close. The star and the production were the toast of London when it opened last season. But first, Price teams up with Tony nominee Calvin Levels for the new play Collaboration: Warhol & Basquiat. Running December 2 through December 22 at Here Arts Center, Collaboration examines the price of fame while depicting the artistic relationship between two of the twentieth century’s greatest artists, pop icon Andy Warhol and Neo-expressionist painter Jean-Michel Basquiat.

BroadwayBox caught up with the busy Mr. Price to talk about the three big projects, the stage icon he still wants to collaborate with, and what he enjoys to see as an audience member.

1. What attracted you to Collaboration? Why did you want to tell this story?
I didn’t know very much about Warhol and Basquiat and I thought the play was fascinating. It’s an extraordinary character study of these two very disparate artists and men, and they are coming together for this period of time to create really extraordinary paintings. I was just dazzled by their personalities, and also by Calvin’s writing—which is both human and political. I just thought I want to be a part of this. I’ve been doing a lot of work in film and I very much love being in a room with actors. This gave me the opportunity to roll up my sleeves and be in a rehearsal room, which is probably my favorite place to be. It all worked out quite well.

2. You’ve had such wonderful collaborations in the theatre and on film. How do your most successful collaborations begin?
I guess they begin with a meeting of the minds. Are we all doing the same thing? I collaborate with designers and writers, and it becomes about, ‘Do we all want the same outcome? Do we all have the same point of view, or can we find a point of view that is unified?’ Without that a collaboration is very treacherous. I wind up working with the same people a lot—my designer has been with me 15 years; my associate director has been with me 10 years; I do a lot of work with Audra McDonald, whom I love. When I find people I enjoy collaborating with I hold them close. It’s not really loyalty as much as I love being in the room with them. They bring out the best in me and hopefully I encourage the best in them.

Audra McDonald in the Price-helmed productions of 'Lady Day at Emerson's Bar & Grill', 'Passion' and '110 in the Shade'

3. I’m so looking forward to the spring to see your collaboration with Glenn Close in the Sunset Boulevard revival. How did Glenn surprise you?
I don’t know that it surprised me, but what was wonderful was when Glenn and I first met and I asked, ‘How faithful do you want to be to that original interpretation, and are you willing to look at it freshly?’ And she jumped at the chance. It made it exciting that we weren’t just recreating what she had done 20 years ago. Who is she now? What does this show mean in this period of time? What does a May/December relationship look like now, and how do we feel about them? It all became very alive. This production is very human and very moving, I think. It’s a much more naturalistic production. In the original production the set was naturalist and the performances were a little more abstract. Now, the set is abstract and the performance are very realistic, very grounded. It’s about a middle-aged woman fighting for her life, and not about some grendel creature. She’s not the Norma you remember. Glenn is providing a very layered performance that is much more human than what was originally presented.

4. How does it feel to see the way Best Worst Thing That Ever Could Have Happened has been embraced?
I am so proud of it. That was the greatest collaboration because I didn’t know what I was doing and I had great producers who taught me how to make a documentary. I worked on it for nine years. I really learned how to collaborate from that process more than any other. They were so patient. We all had the same goal in mind and we all saw the same film in our head; it just took us a really long time to get there. But we all listened to each other and brought each of our particular strengths and celebrated the strengths within each other. I’m really proud of it. It’s candy for people who love the show.

6. Since Joan Rivers’ death, a lot has been made about her heartbreak following the failure of her Broadway play, Sally Marr...and Her Escorts. As her co-author and director, what was your experience like with that production?
She was lovely and she treated me beautifully. I started working with her as a director, then I started helping her write it—and she was very generous in terms of giving me a large piece of the play. We worked for a couple of years, a couple hours a day, a couple days a week—it was a long process. She worked incredibly hard, but I think at that time she was just a little overextended and overexposed. She gave a great performance and did anything I asked. She was always funny.
Do you think the play is revivable?
I’m not sure. We wrote it on her and for her but it would be interesting. You have to have the right woman, and I don’t know who the right woman is. You need a woman who can embody that Borscht Belt/Sophie Tucker-type comedian, and that was DNA to Joan. She knew that world intimately.


7. What do you love to see as an audience member when you go the theatre?
I love to be surprised. I love to be transported. I love stories of transformation, where people grow and change for the better—I’m attracted to those kind of stories. Imagination is certainly a huge thing I’m looking for, and to get lost—to forget I’m sitting there—and just be engulfed in the story and the performers and the material. Those are the things I most hope will happen, and happily they sometimes do. I’m hoping by the end of it I take away something that will last. Beyond, ‘Oh, that was fun. Where are we eating?’ I want something that sticks with me and makes me think about who I am and what my place in the world is. The older I get the less I enjoy pure entertainment. Escapism is not as interesting to me as it once was, and maybe that’s a product of age, but I like things that are darker and more complex.