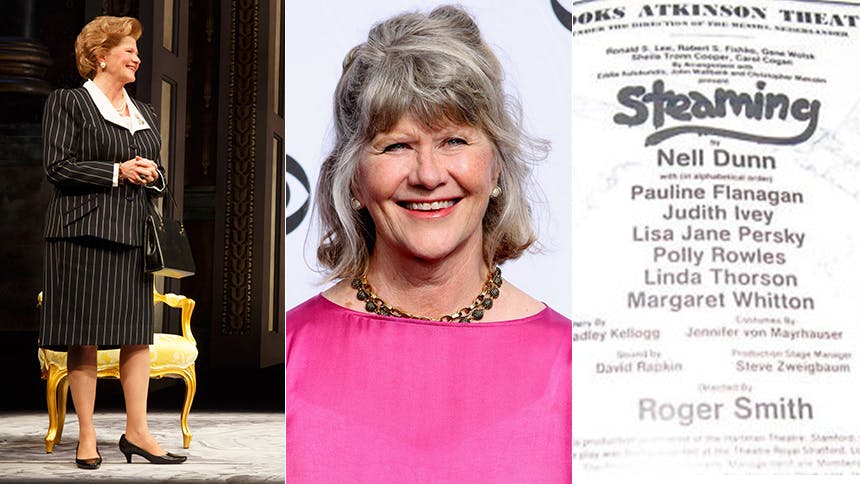 Two-time Tony Award-winning actress and director Judith Ivey is giving the Queen hell as feisty Prime Minister Margaret Thatcher in the acclaimed Broadway premiere of The Audience. The head-to-head battle between Ivey’s Thatcher and Helen Mirren’s Elizabeth is so good it brings the crowd to the edge of their seats. Below, Ivey shares with BroadwayBox the early credit that put her on the path to stardom.

She won Tony Awards for Best Featured Actress in a Play in 1983 for her role as Josie, a hostess at a topless club who frequents a steam room in East London, in Steaming and in 1985 as Bonnie in Hurlyburly.

And let’s throw some props at Judith Ivey for one of the most gorgeous and painful renditions of Follies’ “Losing My Mind” ever. How was she not nominated for a Tony in 2001? The shake at 3:20 alone is worth the nomination.

Ivey in ‘Women on Fire’, ‘The Glass Menagerie’ & ‘The Lady with All the Answers’

Obviously, we've all seen her on screen at some point, with a long career in TV and film including The Lonely Guy, The Woman in Red, Harry & Son, Brighton Beach Memoirs, Will & Grace and White Collar.

Women and gays of a certain generation will always love her for her role as the glamorous B.J. Poteet on Designing Women. #Respect #Praise


So with a career this varied and acclaimed, what in the world would Judith Ivey consider her game-changing moment?

Well, certainly the one a lot of people would say changed my career was the role of Josie in a Broadway show titled Steaming. Up until that point I was what we would label a working actress in New York, having great success on stage but yet to be in a feature film or move into theatrical television, and it really did turn things around for me.

My first film Harry and Son was directed by Paul Newman and I was cast in that because of Steaming, and Steve Martin saw me in the play and requested me to come in and I got a role in The Lonely Guy right on the heels of Harry and Son. Then while shooting The Lonely Guy, Gene Wilder was looking for someone to play his wife in The Woman in Red and Charles Grodin, who was in The Lonely Guy, recommended me. Literally in one year I shot three feature films and had not done that prior all because of the success of Steaming. It was all such a whirlwind. The irony being I was playing an East End cockney tart and all my film roles were as Americans.

A lot of casting directors, I found out later, thought I was British and wouldn't call me in to audition for American plays. One of those casting directors at the Public Theater said, ‘We don’t do British theatre here so I can’t call her in,’ and they said, ‘No she’s not! She’s from Texas.’

Steaming was also a role that changed my approach to acting. I feel I was always a very measured actress and what I would now call stiff and calculated, and Josie demanded much more free forum—almost being a stand-up comedian—and I embraced that. I changed my approach so now I am incapable of repeating something over and over exactly the same; I always change it up. I rely now on what it is the character is saying at that moment. I am very grateful for that because had I been as stiff as I used to be, I would have been eaten alive by the talented, volatile actors of Hurlyburly, my next Broadway show.

See the wonderful Judith Ivey as Margaret Thatcher in The Audience at Broadway’s Schoenfeld Theatre.