The Game-Changer: Robert Cuccioli Looks Back On The Musical That Lead Him to Shakespeare 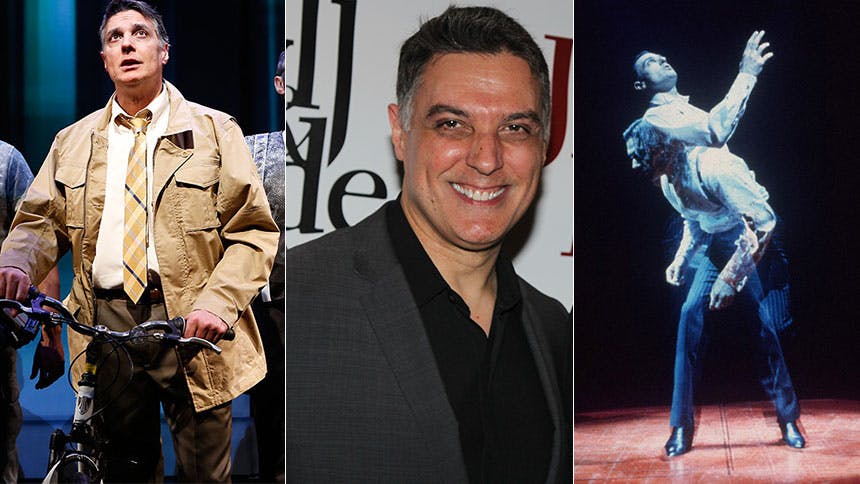 Tony nominated headliner Robert Cuccioli stars as journalist Tom Flynn in the off-Broadway stage adaptation of Bikeman at the Tribeca Performing Arts Center. The play is based on Flynn's first-hand, true account of September 11, 2001.

Robert Cuccioli and the cast of 'Bikeman'

Cuccioli’s previous off-Broadway star turns include And the World Goes ‘Round, Temporary Help, Jacques Brel is Alive and Well and Living in Paris and Dietrich & Chevalier: The Musical.

Robert Cuccioli in 'And the World Goes ‘Round,' 'Temporary Help,' 'Jacques Brel is Alive and Well and Living in Paris' and 'Dietrich & Chevalier: The Musical'

A powerful singer and actor, Cuccioli broke out as Lancelot in the national tour of Camelot starring Richard Harris. Soon after, he made his Broadway debut as Javert in the first Main Stem production of Les Miserables. Most recently, Cuccioli appeared on Broadway in the dual roles of the Green Goblin and Norma Osborn in Spider-Man: Turn Off the Dark.

But to a legion of fans and musical theater lovers everywhere, Cuccioli is best known as Broadway’s original Dr. Henry Jekyll and Mr. Edward Hyde in Frank Wildhorn’s gothic musical Jekyll & Hyde. For his performance, Cuccioli earned a Drama Desk Award for Outstanding Actor in a Musical and a Tony Award nomination for Best Actor in a Musical.


When BroadwayBox caught up with the Bikeman headliner, he reflected on how that role changed his life and career.

“There have been a couple of things that have changed the flow of the stream in my career, but I really can’t deny that Jekyll & Hyde was a true game-changer—not only in my career but how I approached things. As far as a singer goes, I was a traditional Broadway singer in the style of Rodgers and Hammerstein and Lerner and Loewe and Jekyll & Hyde forced me to really work on my voice and change my style of singing into a pop-rock style. Also, the role just catapulted me career wise. It made me not only a New York name, but a national name; and because of that, it gave me the cache that regional theaters would take the risk on a musical performer doing straight plays—contemporary pieces, comedies, even Shakespeare. And it’s something I always wanted to be known as, an actor, as well as a singer. And it opened that door for me, and I started developing that side of my career. Now, I’m pretty evenly split between musicals and dramas and it’s because of Jekyll."

Check out Cuccioli performing the show's signature song "This Is the Moment" in the video below, and don't miss him in the new drama Bikeman.