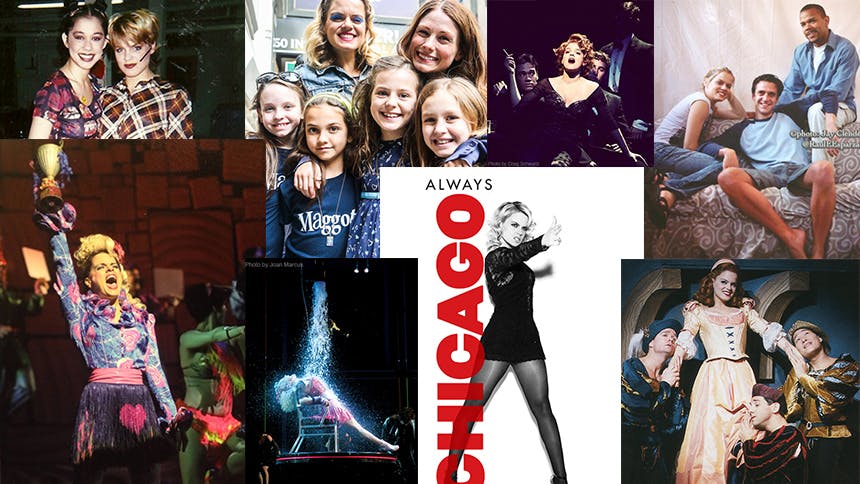 Chances are if you love musical theatre today, you’ve belted along to the sound of Broadway great Amy Spanger—whether you were going for broke singing “Come To Your Senses” alone in your room or serving up your best “Always True to You in My Own Fashion” in the car.

, where she stars as the title character’s nasty, self-involved mother, Mrs. Wormwood.

Below, Spanger shares with BroadwayBox her Broadway scrapbook—filled with rare photos and fabulous untold stories. 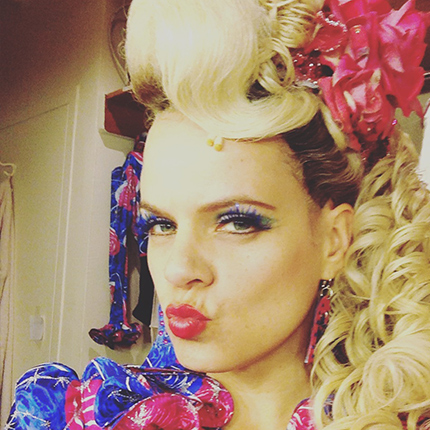 I was late to the party seeing Matilda. I got the audition over the summer, I went to see the show, and I was blown away! I was like, ‘I have to do it’—it was the same experience I had when I saw Urinetown. I saw it and said I have to be in the show; I have to. Then I actually was. I had the same feeling seeing Matilda. I have to tell this story and be a part of this story. 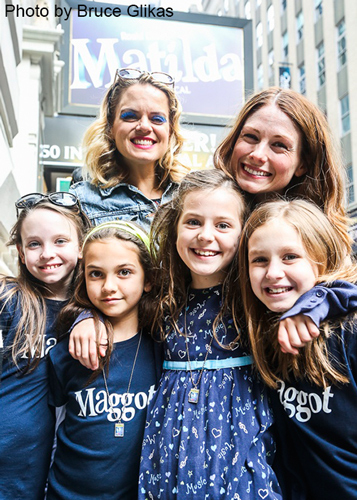 Each one of the Matildas are all wonderful and they are great kids with great parents. This show is a huge endeavor for a kid—to carry a Broadway show. I don't know if I could have done it. I’m just in awe of all of them, and each one of them has something different to offer. That keeps us on our toes and it keeps it fresh. 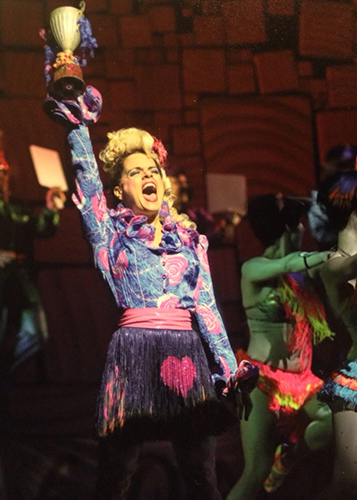 They put me through my paces for sure. I sang and read and did an hour-long dance session—which was really hard. I have a great amount of respect for Lesli Margherita and what she brought to the role. I was intimidated by the character at first because she’s kind of a bully, and I’ve never played this boorish, shrewish bully. I thought, ‘can I do this?’ But I feel really good about the character that I’ve come up with. I was attracted to this group of creators because they picked me, and I am so different from Lesli that I thought it was a brave choice for them. It’s been really important for me to come through. 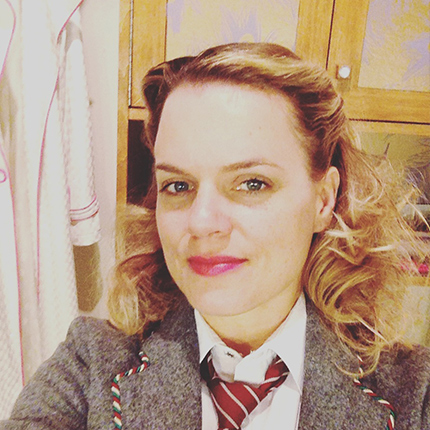 I feel very strongly about this piece and what it does for young kids who feel on the outside. I go to the stage door and there are all these young kids seeing a Broadway show for the first time. They are just wide-eyed and mystified. They are so inspired by Matilda and the kids in the show, and how this girl turns it around and becomes a healer. It’s a magical story. 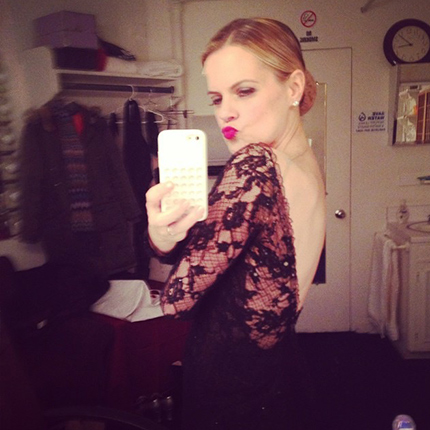 The idea of being a star is the thing that feeds all the actresses that play Roxie. I know that I have talent, but the idea of being a star is not somewhere I sit all the time. I don’t think ‘I am a star’, but when you’re playing Roxie you really can delve into that idea in a way that is really fascinating. She feeds my soul in a way, in an artistic way and in a way where I really unapologetically believe in my own star. And it makes it fun. 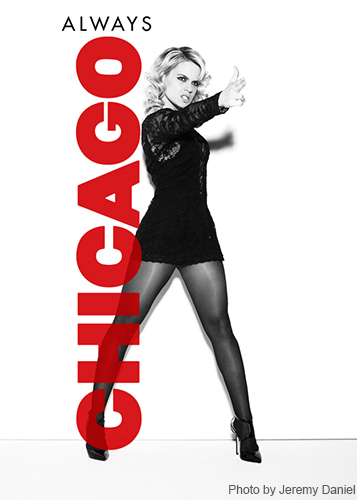 They never used this poster. They shot them in 2013 for a new ad campaign (I think it’s ‘cause I’m wearing too much clothes). I just love this picture. I think it’s really cool. 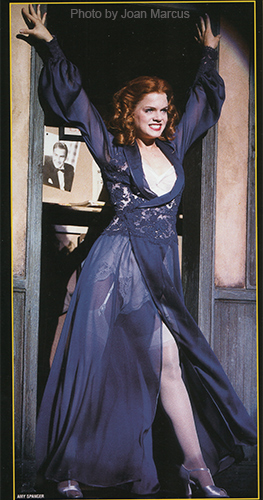 Kiss Me, Kate was literally a Cinderella story. I think about that being the most fun I ever had on a Broadway stage. I had dreamt about playing a lead on Broadway and it was my first. Everyday I thought, ‘I get to do this? I get to do what? I modulate to what?’ It was all just a dream come true. Every night I went through the lyrics of “Always True to You” in my dressing room before I went on stage because there were 11 verses and I didn't want to forget any. 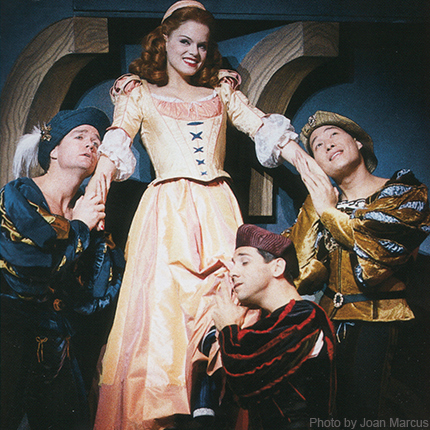 It’s funny, it was my first lead in a Broadway musical and all arrows were kind of pointing to me getting a nomination—there was an expose written about me in The New York Times, I was on New Yorkers To Watch, I appeared alone on Rosie O’Donnell, all this stuff—and I didn't think about not being nominated. Everyone was telling me I’m a shoo-in, and the day they were announced I was disappointed but it helped shape who I am. Things haven’t just been handed to me in life and it made me a stronger person. People in the community were more upset than I was. People comment to me on that performance a lot to me in terms of my career and that's all that matters.

I’m incredibly proud of that piece. It was so simple; it just felt like Scott Schwartz, the director, just let us go and find it ourselves. It was a really, really creative time in my life. I loved working with Jerry Dixon and Raul and doing a three-person chamber musical. I had never had that experience before and haven’t had it again, and it was amazing.

I got to really sing [in tick, tick…BOOM], and I got to sing that great song “Come To Your Senses”, which actually Marin Mazzie recorded in the demo. We changed the idea of “Come to Your Senses” midway through rehearsals—that it would become this big, belty thing. We had a read-through and I just belted the shit out of the end of it, and it was like ‘oh, ok, that’s what this is going to be now.’ It’s been a song that people bring up to me all the time.

That is closer of the first act of The Wedding Singer, and it’s one of my favorite still photos from a musical that I’ve ever had someone take of me. It’s Joan Marcus. Every time I see it I think, ‘Oh my god, I can’t believe that happened.’ But it did, eight shows a week. The set piece would roll out, I’d dance around on it, then twirl into the chair and pull down, and literally I’d hear gasps. It was pretty spectacular. 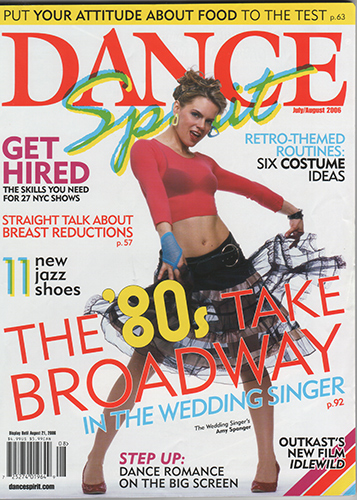 This was while I was doing The Wedding Singer, and I was on a magazine cover so I had to include it. 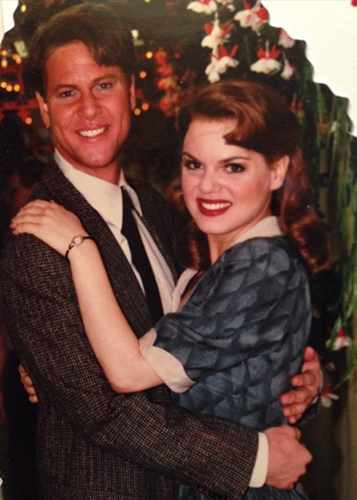 That's a picture of me with Alan Campbell going on as Betty Schaefer when I was an understudy. It was my first Broadway show, and it was a dream. I moved to New York and I gave myself three years to get on Broadway—and I did it in two years and 10 months. 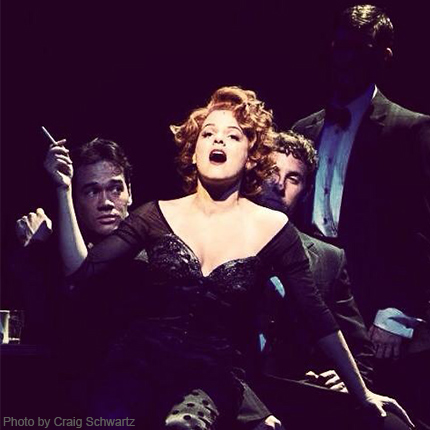 This is from a musical called Robin and the 7 Hoods that I did at The Old Globe that Casey Nicholaw directed, and that is where I met my husband, Brian Shepard. I got to do this number “Same Old Song and Dance”, and it was the most amazing, fantasy, big belt number where guys were lifting me on the high notes. It was like a musical theatre fantasy. It should have come in; it was so good.

Me and my baby at the @rottenbroadway opening! Love my dress! @amandauprichard


I love Brian, my husband. He’s the best person I’ve ever met in my life. We just celebrated our honeymoon after four years of marriage—we went to San Francisco and Napa. He’s such a great partner for me in this life, and I wanted to include that here.

I did solo shows this past year at Birdland, Joe’s Pub and 54 Below. I had a little time between gigs, and I finally took the leap and got together with my friend Kris Kukul (who is amazing and an incredible arranger) and we just sat down and decided what I might want to sing. It was really fun. I loved it. I’ll do it again probably. 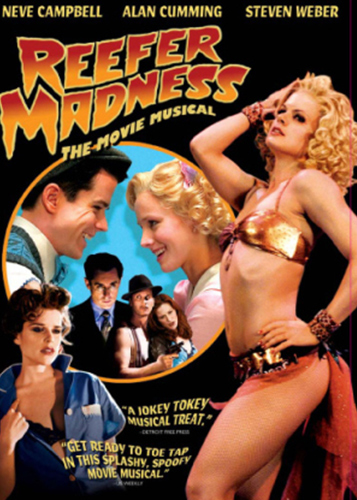 Reefer Madness was one of the best experiences ever. I was living in LA; I had been auditioning a lot and not getting things; so I drove to Robertson where there are lots of shops, and I was like, ‘I’m just going to buy myself something.’ I go in a store and my agent called to say ‘you got Reefer Madness.’ That was a Friday, they flew me out to Vancouver on Sunday and I started on Monday. We rehearsed the movie like a play for three weeks, then we shot rehearsals in street clothes on the set, and it was great. I just love all those people. On the last day of shooting, I was bawling. It has a cult following, but I wish it had been released in theatres so more people could have seen it. 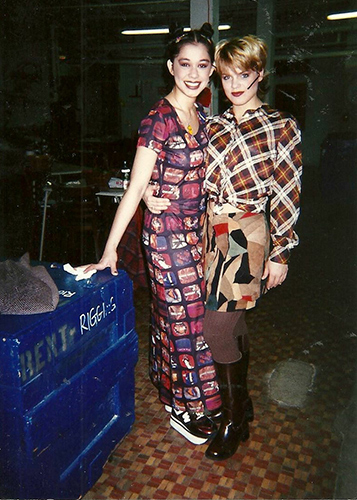 I did the first national tour of Rent six months after it opened, and it was incredible. It felt like being a rock star. We went to Boston and Chicago, and we’d walk out on stage and the audience would leap to their feet and scream. It was a powerful experience, and it bonded us for life. Those people from the cast are my best friends. The woman in the picture, Julie Danao-Salkin, went on to Play Yoko Ono in Lennon, and she’s my best friend. 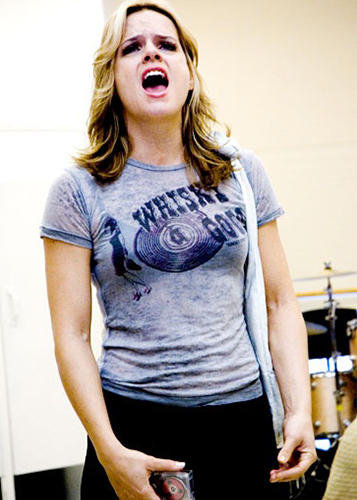 That is rehearsal from Rock of Ages. I read the script and thought it was so funny, and I’d always been a fan of rock from the ‘80s—being a child of the ‘80s that time is so crystalized in my mind. I remember screaming those songs in my car. Sherrie was right up my alley comedy wise—that edgy ingénue is in my bag. 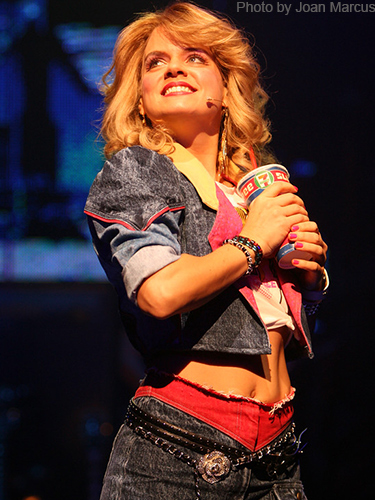 I just felt deeply connected to that show because I felt like it was my story. I moved to the city not really knowing anybody, having not finished school, just taking this leap of faith that I’m going to be an actress and a star on Broadway—and people were like ‘you’re crazy’. I really just knew that character inside and out. How naïve Sherrie is was exactly how I was.

Head over to Broadway's Shubert Theatre to see Amy Spanger get loud in 'Matilda'.