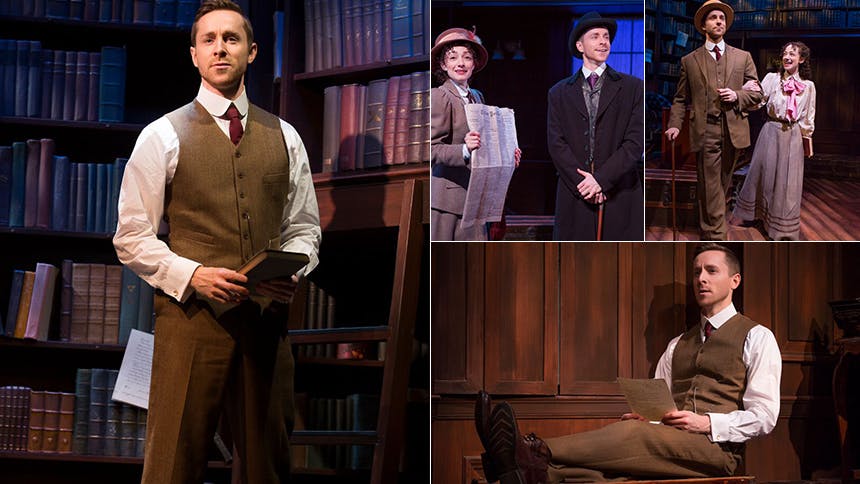 . The Glory Days and Dogfight vet plays Jervis, the mysterious benefactor who falls in love with Jerusha through her letters. BroadwayBox caught up with Halpin to talk about falling for his co-star, performing on a livestream, and a fun IMDB credit.

1. What was the moment you knew you were going to marry your co-star, Megan McGinnis?
I'm not sure I have an exact moment, but I knew fairly early in our relationship that I wanted to spend the rest of my life with her. The second I heard notes come out of her mouth I knew I had to meet her, and although we didn't become friendly for 4+ years after that instance, there were always things drawing me to her. I left for tour two months after we started dating, and although conquering 14 months of long distance made our relationship very strong, coming home and being able to spend time together in our city was exhilarating. She got me good.

2. What was the experience of the Daddy Long Legs livestream like for you?
The livestream was a thrilling experience. In some ways, it felt like a normal show, because that's what we were out there doing—we made no adjustments for the camera. (We'd only done a run-thru for the livestream director and his designers that afternoon, so they could see our play!) But ultimately, with a full supportive, friendly audience, in addition to cameras, there was no ignoring how special the evening felt. I'm very proud of how everything turned out. The execution was remarkable.

3. Whose voice did you idolize growing up? Was there an album you just wore out singing along to?
Pop wise it was Wanya Morris from Boyz II Men, Michael Jackson, Paul McCartney and Scott Leonard from Rockapella—among many other stratospheric tenors when I was little. In the musical theatre world, I remember loving the original Enjolras, Michael Maguire, from the Broadway Les Mis. Also when I was in high school and college, Norm Lewis, Billy Porter & Michael McElroy were men whose voices I often tried to emulate (all three of whom became friends of mine soon after moving to NY). People who know me well are well aware of my obsession with Mandy Patinkin, which also began in high school. Among the albums I've worn out: Rent (OBCR of course), Floyd Collins, Pacific Overtures, Sunday..., Violet, Parade, The Last 5 Years and Assassins.

4. Your first credit on IMDB is someone named "Zero Body Fat Boy"; what's your key to staying in shape and what's your guilty pleasure, ball-out food of choice?
I could diatribe here talking about work out regimens, dieting and being fit, but how boring would that be?! In short, I love to mix it up. Mainly, I train in similar ways an athlete would, mixing high intensity, functional fitness, weight training all wrapped in one. For me, it's about maximum output in a minimum amount of time. Our bodies perform best in small windows. Rarely will I ever do anything over an hour aside from yoga. Our bodies thrive on being challenged. But always be smart and know where you are fitness wise. Any action is better than inaction. Okay, that's enough. ☺ With regards to food and guilty pleasures, I love dark chocolate, wine, cheese and bread, so I work very hard knowing those treats will eventually await me.

5. What are two things you're super passionate about outside of performing?
At the moment, the first is making a home. In December, Megan and I bought a new apt and since Christmas, we've been non-stop about paint colors and furniture and lighting fixtures, and all the things we're saving up to purchase. It's beautifully overwhelming. Secondly, I'm looking forward to planning our next vacation. Megan and I both love to travel and we're in the throes of trying to narrow down our next adventure. We've been to England, France, Italy and Japan together; I know we want to leave the country again, so do we venture to Spain? Somewhere tropical? A repeat trip to a different region of France or Italy? Thailand? Ireland? There are far too many desirable options!