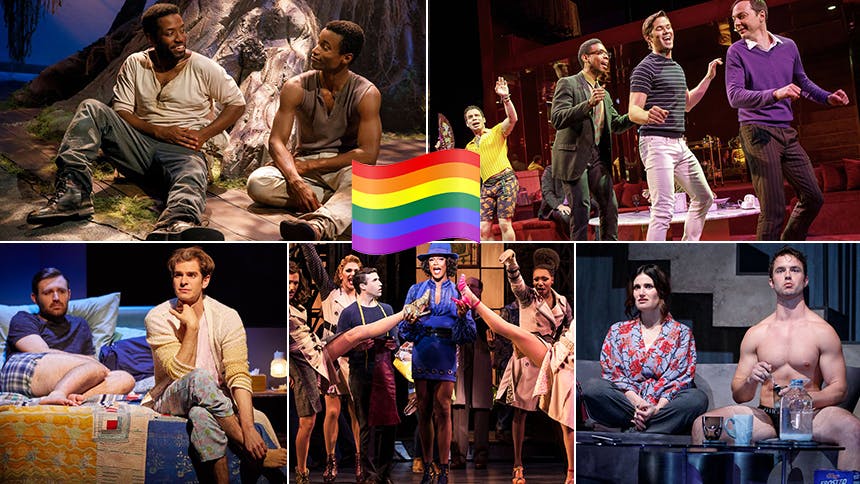 This weekend (June 22-June 24), New York celebrates LGBTQ Pride, and whether your big cornerstone plans are heading to the parade, bar hopping, or all-you-can drag brunch, there’s always time for a fabulous, gay theatre moment. Here are five shows we recommend making time for this Pride month in NYC (or if you don’t have the time for a full show, there are some kiki concert options too!).

Sugar in Our Wounds


In his new Love trilogy, playwright Donja R. Love looks at queer love at three different points in Black American history (Civil War, Civil Rights Movement, & Black Lives Matter), and this is the first piece. It’s an INCREDIBLY powerful look at a love story between two young male slaves (James & Henry) on a southern plantation in 1862. You’ve never seen something like this because this story has never been told before. Get ready to cry though.

The Boys in the Band


Mary! Gather up your very best Judys and settle in for this star-studded revival. The shade is epic, the actors are slaying, Matt Bomer’s costume at one point just involves a pair of briefs, and the pre-Stonewall subject matter is beyond captivating. A group of gale male friends gathers for a birthday party in 1968 and as the drinks flow, the claws come out.


This new off-Broadway play stars Tony-winning gay icon Idina Menzel and Jack Wetherall (Aka Uncle Vic from Queer as Folk) and examines a relationship between a 70-year-old millionaire and his hot 20-year-old boyfriend and how it affects his 50-year-old daughter, who just got left for a woman half her age. There’s Idina, there’s gorgeous newcomer Will Brittain in a jockstrap, & there’s plenty to laugh and think about.


Yes, the Tony Award-winning theatrical juggernaut is a big time commitment, but you better believe it’s worth every second you spend in that theatre watching Tony winners Andrew Garfield and Nathan Lane deliver these performances. Tony Kushner’s play about gay men living in NYC during the Reagan-era AIDS crisis is a vital piece of LGBT history, and time is running out to see this brilliant production.


The Tony-winning musical featuring a fierce AF ensemble of drag queens high-kicking and splitting to the music of Cyndi Lauper is one way to feel the fantasy this pride. Starring out actors Tyler Glenn & J. Harrison Ghee and featuring the insanely talented Carrie St. Louis, this is a perfect post-brunch show for you and friends. Experiencing an entire Broadway theatre on their feet as drag queens sing “just be who you want to be” and “Celebrate yourself triumphantly” is what Pride weekend is all about.

Bad decision expert Tori Scott is back at Joe’s Pub with her concert Make America Gay Again. It’s a truly hysterical night featuring a range of music from Judy to Beyonce.
Bianca Del Rio hosts all the RuPaul’s Drag Race Season 10 queens at Town Hall at 9 PM.
Robbie Rozelle is Bustin’ Out with the help of the incredibly fierce guest stars & big-time SINGERS Jessica Vosk & Christina Sajous. A LOL one-man-concert about being over 40 in Hell’s Kitchen is just what the doctor ordered this weekend.

New York City Gay Men’s Chorus teams up with six fabulous drag queens for Burning Bright: Torch Songs on Pride Weekend, a musical look at famous torch songs through a queer lens. (It’s also a fundraiser for the chorus, so you’re being entertained and helping out your gay brothers.)

The Boys In The Band
Hot
Best Priced Tickets

Kinky Boots
Best Priced Tickets
Newer
Friday Playlist: Party This Pride Like The Boys in the Band on Broadway with These Songs from the Play
Older
Rema Webb & Andre Ward Talk About the Joy & Laughter in Escape to Margaritaville, Meeting Jimmy Buffett, & Onstage Mishaps
Sign up for BroadwayBox Discount Alerts