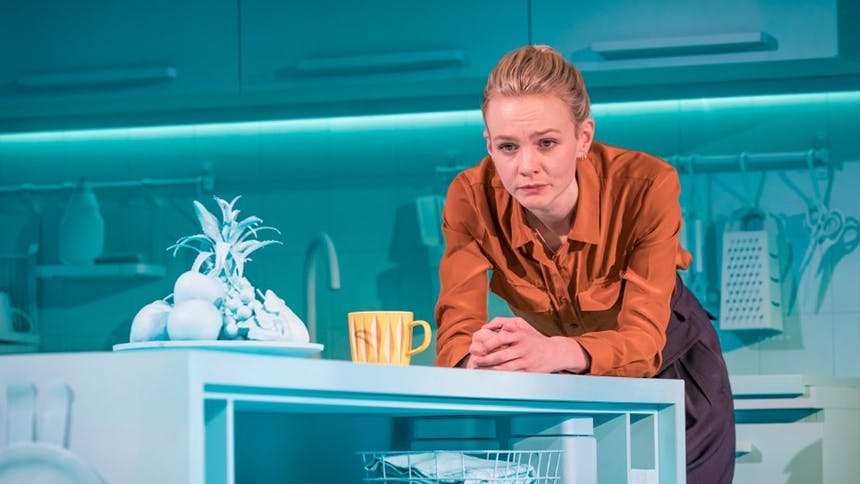 . Produced by Audible, the critically-acclaimed Royal Court Theatre production about a woman who juggles a successful TV career, motherhood, and her relationship in today's world lands at NYC's Minetta Lane Theatre for a limited five-week only engagement. BroadwayBox caught up with Carey to talk about why she was attracted to this story, the greatest solo performance she's ever seen, and how she picks her projects.

1. What interested you about the relationship and the way it's told in Girls & Boys?
Well, I’ve always wanted to do a monologue because I thought, there’s probably nothing harder you can do, and if you’re going to do something you should really try and do it as well as you can. And this was sort of the ultimate challenge in a way. I thought if I can get it out of the way I can do sort of easier stuff the rest of my career. [Laughs]

I thought it would be great to do something that’s kind of impossible. When I read it, it was such good writing and the story was such an amazing story. It also has this brilliant element in which it starts as a straight monologue and then you go back to scenes in which she’s interacting with her children but the audience can’t see them. You’re in her living room and her kitchen and she’s talking to her two children, and picking them up off the floor and wiping their mouths and telling them off but they’re not there. So that was an added challenge but quite exciting as well. And actually, once I started doing the runs I started feeling that was my happy place.It can feel so isolating doing a monologue, but when you are acting, even with invisible children, then you’re still working with someone else.

2. Jumping off the idea that this is such a big challenge, which role has been the biggest challenge for you up until this point?
In some ways, Suffragette was probably [the biggest challenge]. Her experience—and the experience of so many women at the time—is so relentless and you're trying to make that interesting, because it’s not massively interesting to see someone struggle for an hour and a half on screen. So it was a way of modulating her experience so that it wasn’t fully, fully traumatic the whole time (because people don’t want to watch that).

I think Shame—a Steve McQueen film I did a while ago—was a challenge in a different way because I just kept on having to be pushed out of my comfort zone by Steve. He was incredibly good at that. There’s no one really better at that. And obviously, acting opposite Michael Fassbender was like going to the Olympics. It's like someone who quite enjoys running and then has to race Usain Bolt—that was acting with Michael Fassbender in a nutshell.

3. What is a solo performance you saw that rocked your world?
The second monologue I saw (which basically made me want to be an actor) was Pete Postlethwaite at the Riverside Studios in London. He did a play by Justin Butcher called Scaramouche Jones. It’s a play about a clown, and in his mind it’s the last night of his life, and he’s telling the story of his life. He’s wearing full old-fashioned clown things, with the paint on his face, and big shoes. I remember when the lights came up honestly going, “where are all the other people?” Because he’d painted all these other people in his life so perfectly. I was shocked. And that was when I was like, "Oh, I want to do that!" And, actually, on opening night of this play in London, my mum found the [Scaramouche Jones] poster I had taken from the theatre and framed it and gave it to me.

4. Is there a difference in the way you choose stage projects compared to film projects?
To be honest, the first play I ever did was at the Royal Court when I was 19 and it was play called Forty Winks by Kevin Elyot. It was really different because the only other job I’d ever done was Pride and Prejudice. I played a Bennet sister and we spent the whole summer getting pissed and having fun. It was so much fun and we were all best mates, then I went to this incredibly dark play at the Royal Court where I played a narcoleptic rape victim. I didn’t know what I was doing, and I hadn’t had any theatre training, and I just felt completely out of my depth. It was a great play and a great director, Katie Mitchell, but I didn’t know what I was doing.

But then the second play that I did was The Seagull at the Royal Court and I played Nina, and I had such an incredible experience. It set the bar so high for writing that I then found it hard to find plays that I wanted to do because Nina’s such an incredible role. So then it was a case of finding something as difficult or interesting as that. That’s why it’s been fewer projects because it’s so hard to find things as good as Nina. I’ve been very privileged to have such a high bar.

5. Which film of yours do you think you’ve seen the most times?
An Education because it was in so many film festivals and I was at an age and a lack of experience where I didn’t know that I could opt not to watch it. Now I’m old, I know that I don’t have to sit through it, so I don’t. I just introduce the film and then leave and go to dinner. But I was 23, so I was like I guess I have to watch it.