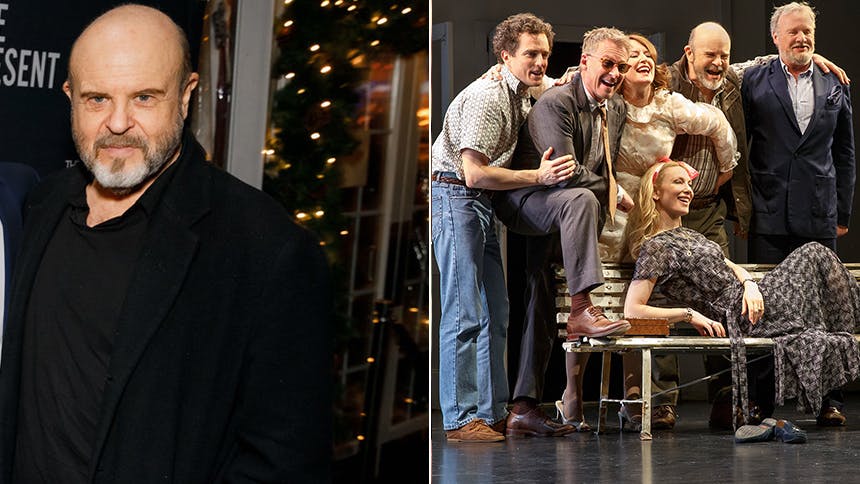 Actor and playwright Marshall Napier makes a smashing Broadway debut as the drunken and jocular Ivan (one of the many characters assembled for a 40th birthday party in the Russian countryside) in Sydney Theatre Company's Broadway transfer of The Present. BroadwayBox caught up with Napier to discuss keeping the work fresh, playing a "shameless old drunk", and the cult film he's still recognized for.

1. What initially attracted you to this project? At what moment did you know you had to be part of it?
I fell for the character first. That’s usually what draws me in. Ivan (the character I play) jumped out for two reasons. Firstly, I discovered he was drunk throughout the entire evening. That really appealed to me—the extremity of it. He’s a character who lives entirely within his own version of reality. (As sad as that reality might actually be.) That gave me something to work with. Secondly, I liked the way he talked. When I read the line, ‘Greetings and salutations from my galaxy!’ I was hooked. A shameless old drunk who has his own galaxy! That’s not something I could say no to.

2. With an ensemble cast this large and you all transplanted to New York, what’s life like backstage? Are you pretty bonded together here or does everyone do their own thing?
Yes, it’s a very bonded cast because we’ve spent so much time together. Backstage there’s less interaction here than in Australia for purely architectural reasons. In Sydney our dressing rooms were all on one level so mingling was easy. Here in the (beautiful) Barrymore theatre we’re spread out over five floors; sort of stacked on top of one another. So mingling takes a bit more commitment. Still, there’s a good spirit backstage and plenty of laughter. We also get together outside the theatre from time to time just to stay in touch.

3. How do you combat a long run? How do you stay present and engaged?
That’s something we talked about a lot on this show. John Crowley, the director, made a big thing about ‘keeping it alive’. Basically it means avoiding auto-pilot. When you’ve done a play as often as we’ve done this one, it’d be very easy to sleepwalk through it. It’s really just mental discipline. You’ve got to shake yourself awake each night and make a conscious effort to step on stage as if it’s for the first time. Strangely, it also turns out to be more enjoyable when you do it that way.

4. You have so many screen credits. Which are you most recognized for by people when you’re out shopping or at dinner in Australia?
When you embark on a film or television project you never know which ones are going to stick in people’s minds. It’s completely unpredictable. I have a few that keep coming back to haunt me. First would be a small Australian film I did more than 20 years ago called The Big Steal. It was a very modest project at the time: a quirky comedy set in the suburbs of Melbourne. But to this day strangers approach me and insist on quoting lines from it (lines I’ve forgotten myself). Some of them have actually memorized whole speeches. It amazes me; this little film still has a keen following while other more ambitious projects have long been forgotten. The other things I get recognized for are TV shows in which I played an ongoing role (Police Rescue, McLeod’s Daughters, and City Homicide). These shows all have avid fans—especially McLeod’s—and they never forget.

5. You totally changed your life around when you moved from New Zealand to Australia to pursue acting, and then you began writing after that. What advice do you have to people who feel stuck and want to change their situation and pursue a dream?
Yes, moving to Australia was a turning point in my life. I’d already broken through as an actor in New Zealand, but it had been really difficult. New Zealand was where I served my apprenticeship; Australia was where I hoped to reach some sort of maturity.

When it comes to giving advice, I have to admit I made every mistake in the book. To give you some idea: I was so naive and ill-informed when I started out that I didn’t even realize drama schools existed. I rang professional theatres imagining, on the strength of my own recommendation, that they’d give me work. They didn’t. I couldn’t even get an audition. So I spent five years doing manual labour (digging ditches, truck driving, factory work) until I got my ‘break’. (These jobs turned out to have an upside. I got to meet some really vivid and strange characters: I still draw on them in my acting work.) I also found my way into amateur productions, which were far more accessible and a very good training ground. (I recommend this course to anyone without access to a drama school—no matter what the snobs say.) Eventually I got my shot at the professional stage and almost overnight things changed. Roles started coming my way and, by sheer luck, the NZ film industry began to take off, so I found myself being cast in films and TV shows as well. To my own surprise I started earning a living.

Australia was the next step and I’ve lived there now for almost 30 years. Over that time I’ve been in countless Australian films, television shows, stage productions and radio plays. I’ve had some minor success writing my own plays and making short films, but acting is still my livelihood.

In terms of advice all I can offer is this: you’ve got to really want what you’re chasing. In my case I had a lot of things working against me: I didn’t have leading-man looks, I was untrained, I was socially awkward and not much of a net-worker. All I had going for me was a bit of raw talent and an unshakeable belief that I couldn’t fail. I don’t know where that belief came from (and it sounds kind of crazy now), but it’s what kept me going. If you can convince yourself that you’re going to succeed it may or may not work out, but you won’t be in danger of giving up too easily. Sometimes that’s all it takes.

Don't miss Marshall Napier in 'The Present' at Broadway's Barrymore Theatre through March 19.