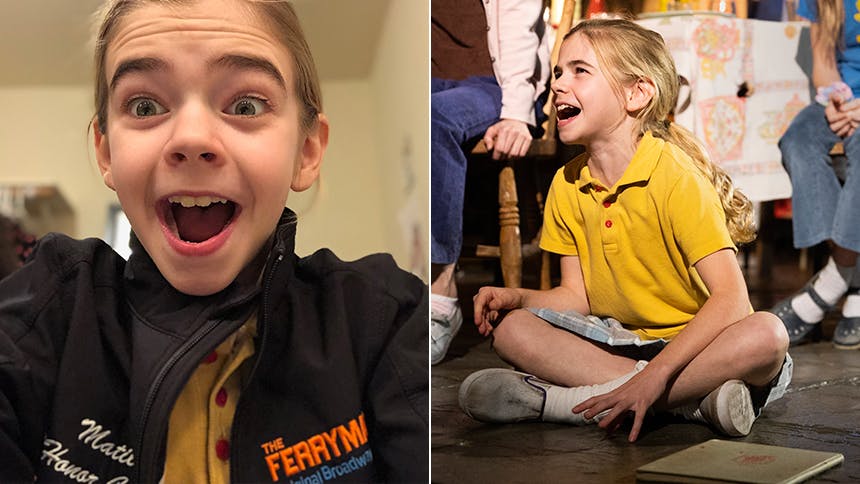 . There's no way you're seeing this play and not talking about her standout performance at intermission. BroadwayBox caught up with Matilda to talk about how she overcame being shy, landing all her jokes in The Ferryman, and her passion for creative writing.

1. What do you love most about playing Honor Carney?
Her passion and her love for her family. I love her name. It suits her perfectly. She pursues honor for herself and her family.

2. What’s the best advice that Jez or Sam gave you about landing all of Honor’s jokes in the show?
Be present, stay in Honor`s world. What is Honor thinking and what is her motive? If you do these things, you won`t have to push the joke.

3. What’s been your favorite Broadway show you’ve seen?
Matilda. And not just because my name`s Matilda. Because this production made me look at things differently, and it reminds me of what a lucky kid I am. It's also a role I'd LOVE to play.

Fun fact: Both my sisters in the show, Brooklyn Schuck and Willow McCarthy played Matilda on Broadway.

4. What do you typically do backstage at The Ferryman while you’re not on?
Binge Let's Make a Deal, play a dancing game we call "Dancing with the We’uns", play Mafia and other games, and make trouble. =)

5. What made you want to be an actress and pursue it professionally at such a young age?
I grew up watching my dad act but I never really thought I wanted to do it. I was very shy when I was a bit younger. When I was 8 years old, an audition came up that all my friends were doing but I wasn`t very interested in it until I read the script. And I thought this script is really funny and it touches me in a special place, so I auditioned for it knowing that I was too young and probably wouldn`t get it. A couple weeks later I got a callback, and by that time I had fallen in love with the character and really wanted the part. The day of the callback I was offered the character! I gladly signed the papers and began rehearsals a couple weeks later. When the show was finished, I was sure I wanted to continue my journey of professional acting because it helped me express my emotions and make people look at the world differently after seeing me. Fun fact: after I continued to act, I became less shy!

6. If you could join any TV show that you love, which would you choose?
Stranger Things, which I am currently watching for the fourth time because I love everything about it—the acting, the storyline, the music, and the way it’s shot.

7. So many cool celebs are coming to see The Ferryman. Is there a star you hope comes to see it so you can meet him/her backstage?
Emma Watson because she is such an amazing role model and actor.

8. You have a love for cupcakes. Where is your favorite place to get a good cupcake?
Magnolia Bakery`s cupcakes are my favorite. A kind friend bought me one after the show and it was delicious.

9. Your bio also says you write and design. Can you tell us more about that? What do you work on?
I love writing historical fiction stories.  One of my favorites is one I wrote about a pretend niece that Harriet Tubman had.  I also love making inventions and dollhouses from scratch.

10. This is your debut! What’s been the most surprising part of being on Broadway?
I think just knowing that people from all around the world come to see this show about an Irish family and really love it and relate so much to it is incredible.

Don’t miss Matilda Lawler in her hilarious Broadway debut in The Ferryman at Broadway’s Jacobs Theatre.