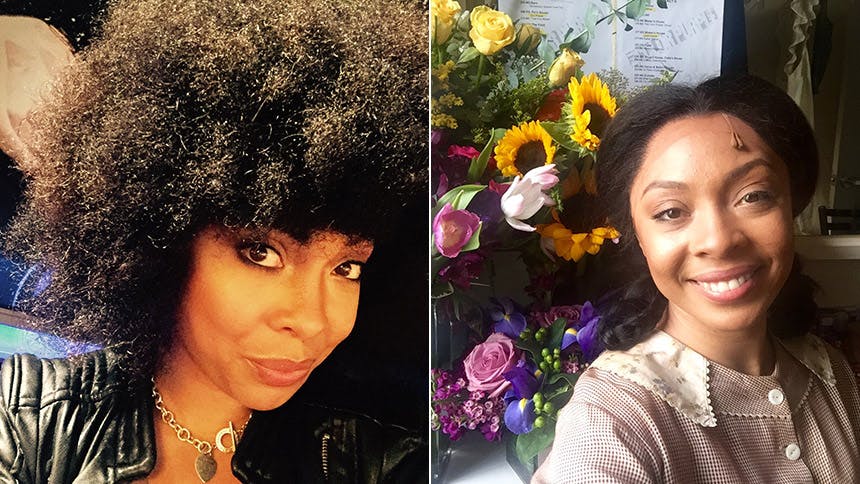 After wining BET's Apollo Live, touring with The Book of Mormon & Motown, and headlining the Pearl Bailey bio-musical Pearl, singer and actress Jennie Harney makes her Broadway debut as Celie's inquisitive and selfless sister, Nettie, in the Tony Award-winning revival of The Color Purple

. BroadwayBox caught up with Jennie to talk about getting the call she booked Broadway, the ground-breaking life of Pearl Bailey, and a disastrous Debbie Allen audition.

1. The first time I saw this production of The Color Purple, I thought:
Wow! Now this is a show that has the power and beauty to make a lasting impact on its audience. I would LOVE to be a part of such a memorable piece of theater!

2. The thing I love most about the character of Nettie:
Is her quiet strength! Her love, faith and diligence keep the sisters tethered and eventually empowered in the end.

3. My first introduction to The Color Purple as a property was:
Buying the original book by Alice Walker and marking it up with my purple highlighter and sticky tabs! I couldn't wait to sink my teeth into the world of this show.

4. The first thing I did after I found out I’d be making my Broadway debut in The Color Purple:
I CRIED! I was with my parents when I got the call, so I got to share that moment with them. It’s a memory I will never forget.

5. My most memorable audition story:
That time my mom insisted that I go to a dance call for a Debbie Allen show and I accidentally kicked another girl in the head… Sorry Laurie! #neveragain

6. Something I found super-fascinating about the life of Pearl Bailey:
Pearl was such a courageous woman, I could go on and on! But one thing that stood out to me about her was that after multiple failed marriages she found her forever love, Louie Bellson, an Italian man! Can you imagine an interracial superstar marriage in the 1950’s!? #aheadofhertime

7. The best advice I’ve received from a teacher was:
Performing is not about “you,” the performer. It’s about the message you have for the audience and the experience that they have! Your job is to use your gifts to impact people’s lives!

8. Most random job I’ve had on the road to Broadway:
Most recently I was juggling work between 3 different temp agencies. The last job I had required me to take up to 25 taxis a day…. and that’s all I can say about that one!

9. The last TV show that rocked my world:
Stranger Things on Netflix has left a void in my life! I need that second season to come out ASAP!

10. The most played album on my iTunes is probably:
Jill Scott’s Woman album has been getting a lot of play time lately.

Head to Broadway's Jacobs Theatre to see Jennie Harney as Nettie in the Tony-winning revival of 'The Color Purple'.