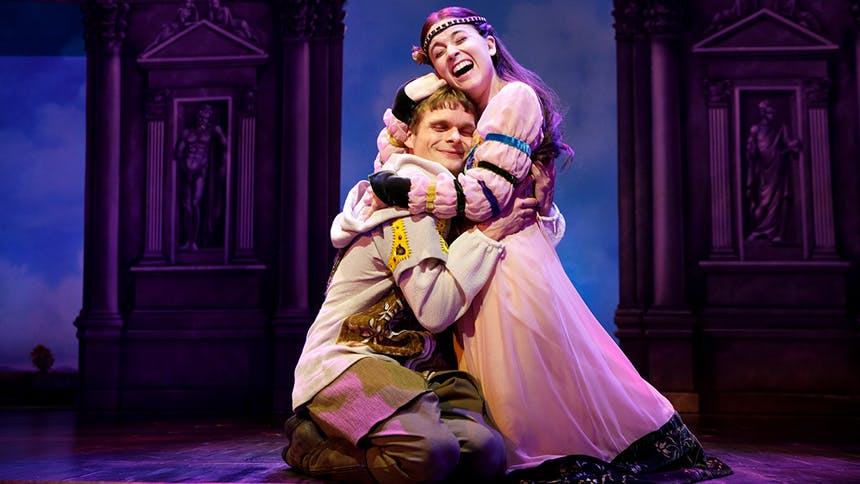 Andrew Durand made his Broadway debut as Georg in the Tony-winning Best Musical Spring Awakening, then he stepped into the starring role of Albert Narracott in Tony-winning Best Play War Horse, and this season he opened his first Broadway musical giving a hilarious starring performance (in and out of drag) as Musidorus and Cleophila in the fabulously woke new Go-Go’s musical Head Over Heels. His big song “Mad About You” is a total showstopper thanks to his fierce vocals.


BroadwayBox caught up with Andrew to discuss how Head Over Heels made him a better LGBT ally, how he became a more fearless, grounded physical performer, and staying in sick physical shape for musical.

1. Your voice sounds killer in this show. What’s your warm-up like for Head Over Heels?
Why, thank you! I love singing these amazing, timeless, rock/pop/punk classics by The Go-Go’s every night. It is a challenge, since I sing a lot of the songs with the women in our show, they are still in their original key. I like to ride my bike to work, as well as warm up physically at the theater. I find that breaking a little sweat, getting your blood pumping and your breath going really helps the voice to warm up. Other than that, just some light vocalizing like some sirens, and humming through a straw and I’m good to go!


2. What has performing in drag as Cleophila during Head Over Heels taught you about the experience your female co-stars go through?
Well first of all, everything truly is more difficult in heels. It’s also a struggle when your hair is long enough that it can find its way into your mouth when you are trying to sing. Our show is filled with messages of body positivity, female empowerment and shifting power away from the patriarchy, and addressing issues of toxic masculinity in society. I have also learned so much about the experience of trans, non-binary, and non-gender conforming people through doing this show. I am a straight white male, and I always considered myself as enlightened, and an ally. However, being in this show and letting myself go into the character of Cleophila has helped me to recognize and break down ingrained masculine/feminine divides, and opened my eyes and my heart to even more ways of being a better ally. Long live the Queen, honey.

3. There are so many big, hilarious, over-the-top moments in Head Over Heels, but what’s your favorite quiet, smaller moment in the show?
My favorite moments like that come from the lovely Rachel York who plays Queen Gynecia. She has a couple soliloquies where she talks to the audience about the decline of her relationship with the King that are quite poignant and sad. These moments are very grounded, and she really has her wits about her.

4. As HOH audiences have seen firsthand, you are in SICK shape for this show. What food or drink do you miss most?
Beer and Pizza! Ugh, I miss it so. At first I really had to be strict and work really hard. There is no motivation like being in your underwear in front of thousands of people each week. I am at a level now where I am pretty happy, so I cheat a little bit more than I used to. There are a lot of sweets around the theater...and with the indulgences of fall and the holiday season coming up, I’m gonna have to keep myself in check!

5. Which of your previous New York credits did you have the most fun doing?
I would say I have two. The Wild Bride that I did at St. Ann’s Warehouse with Kneehigh Theater Company directed by Emma Rice.  I played the Devil! I spent the better part of 5 years working with Kneehigh doing several shows with them in New York, as well as around the States and in the UK. It was like grad school. They taught me how to be a better, more fearless, grounded physical performer. They also taught me how to be a good company member.  I find that type of humility is often lost in the Broadway world, so I am happy to have had those lessons.

My other favorite was The Robber Bridegroom with Roundabout Theater Co. directed by Alex Timbers. It was also very company based as we were all onstage for most of the show. Alex and Connor Gallagher, our choreographer, were such great leaders and so inspiring.  The cast was so lovely and amazing and I made some lifelong friends there. The world of the play was so fun to be in. It was earthy, grungy and raw.


6. What’s the most sentimental thing you have in your dressing room?
I’m not too sentimental when it comes to material objects. So, I guess I would have to say my plants? I have a couple plants I got for my station just to liven things up a bit, literally.

7.  What’s your typical day off from the show like?
Lately days off have been busy doing other show-related things, or very domestic.  I like to just relax, go for a walk, go out for dinner. I’m looking forward to some days off hiking upstate this fall.