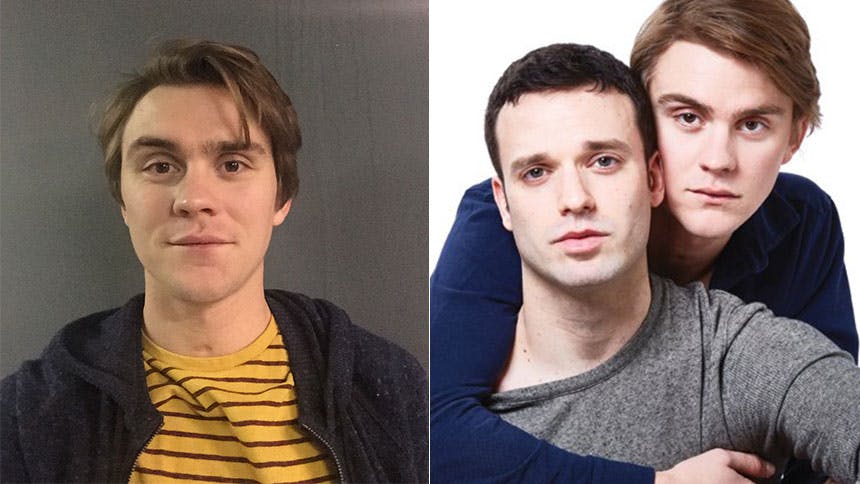 After recently graduating from NYU’s Tisch School of the Arts, Thomas E. Sullivan makes his off-Broadway debut as Chris, the young man who falls for Ben, in the new off-Broadway dramedy Straight

. Get to know the California native a bit better as we talk about the captivating new play, iconic gay stories, and life in an alternative universe.

1. I wanted to be a part of this play because:
The script is just so good. It's hilarious, but moving, and I had met Andy a few years ago; I was very excited to see what he would do with such great source material.

2. Before friends and family come to see Straight, I tell them:
It's so friggin fun! These characters are going through a lot but the circumstances we get to put ourselves in as actors are incredible.

3. The line from Straight I find myself thinking about most outside the theatre is:
"So..."

4. My favorite gay love story from TV, film or theatre is:
I recently saw The Birdcage and it's my new favourite movie. Period. Hank Azaria is incredible as Agador, and obviously Robin Williams and Nathan Lane are brilliant. Way ahead of its time.

5. Performance that inspired me to become an actor:
My high school production of Fiddler on the Roof almost single-handedly made me quit the baseball team, so I suppose that was what really set things into motion.

6. If I had to describe high school me in a hashtag, I was:
#longhairdontcare

7. If I could tell incoming Tisch students one thing, it would be:
The education and training is incredible, but don't overlook working outside of the school. The experience you earn outside of the studios and classrooms is invaluable in the long run.

8. Movie I love so much I know every word to it:
Goodfellas. I watch it at least once a week.

9. If I wasn’t a performer, I might have become:
I loved Mock Trial. In an alternate universe I would have been some rockstar trial lawyer, I think.

10. Role I’m dying to play someday, somewhere, doesn’t matter I just want to do it:
Nicholas in Harold Pinter's One For the Road. I love everything about Pinter but that piece caught my eye at a young age. Shame I won't be able to play it for thirty years!

Straight
Best Priced Tickets
Newer
Hot Clip of the Day: Lisa Howard's "I Want...The Medley" Is a Theatre Nerd's Dream Come True
Older
From the Old Fashioned Couple to the Sexy Couple, What You & Bae Should See This Valentine's Day