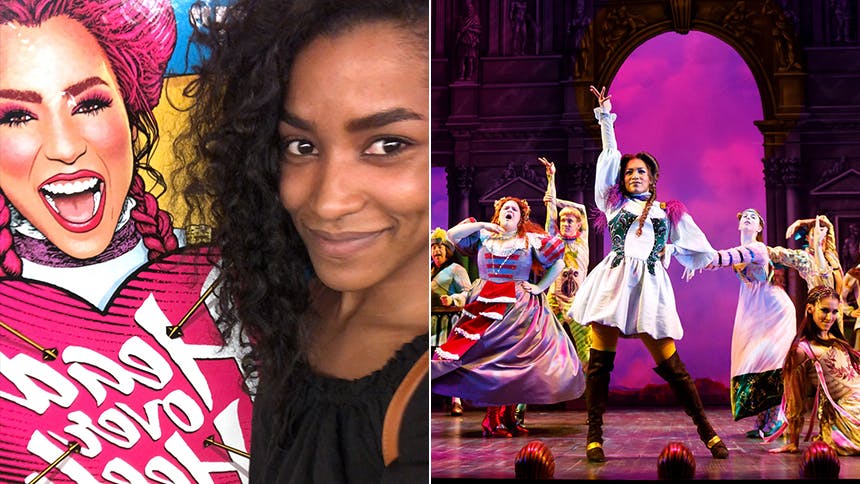 . The Cali native made her B'way debut understudying the lead in the short-lived Groundhog Day musical, she toured the country as the Extraordinary Girl in American Idiot, and now she's stopping the show with the hit song "Vacation".

BroadwayBox gets to know Taylor Iman Jones a bit better as she talks about Head Over Heels, her theatre family in California, and some crazy on and offstage mishaps.

1. What is your pre-show routine for the show?
Before every show I steam my voice and prepare some ginger tea. I make sure to warm my body up in any way I can that day. Sometimes I’ll go to the gym, sometimes I’ll do a quick minute of planks and call it a day. It’s about keeping my voice and body healthy and safe for the long run, I’m trying to do this forever! And then some good music is always a must. I just throw my iTunes on shuffle and see what happens.

2. What drew you to the character of Mopsa?
Her bravery. She speaks her mind and fights for her love. She doesn’t let the odds that are stacked against her stop her from perusing her dreams. She’s no stranger to heart break, but ultimately she’s just wants to love and be loved.

3. How difficult is it to switch between Shakespearean-esque verse and rockin’ ‘80s pop music?
Shockingly they go hand and hand in our world. That’s one of the best parts about Head Over Heels. They blend so well together. Speaking in verse is very similar to saying lyrics. It’s been a fun challenge to navigate.

4. What moment in Head Over Heels are you living your absolute best life?
The opening number!! “We Got The Beat” is definitely one of my favorite parts. The audience has no idea what their in for, and then it’s like being shot out of a canon. We’re all singing and dancing together and just having a great time.

5. What was your favorite part about Head Over Heels’ San Fran run?
I’m from the Bay Area. So the best part was getting to perform the show at home! I started my amateur and professional theater career in the Bay and had been performing in San Francisco and all around for the last seven years, all the way up until I moved to New York. That meant every person I had been performing with, creating families with could come and see my Broadway show without having to come all the way to NY. And, the amount of support in these communities in was incredible. I knew someone in the audience, at every single performance. That has and will never will happen again, and I will never forget that. I owe everything about who I am, to learning and working there.

6. Who were the musical theatre voices you grew up idolizing and singing along to?
I nerded out on RENT, Aida, Wicked, Footloose, Hairspray, Legally Blonde, Audra McDonald, Songs For a New World, Bernadette Peters, Chicago (the movie), Sutton Foster. A little bit of everything.

7. Tell us a Groundhog Day memory that still makes you laugh.
I fell a couple of times during that run. But one time in particular was right before our big tap number. I was supposed to be the first to run downstage and on this night I lost my footing. Fell straight onto my hands and knees, and in that moment decided my best option was to crawl like a cat to the front before standing back up. Luckily I made it in time before being trampled, and I (with the rest of the cast) got a good laugh.

8. What was your craziest tour mishap with American Idiot?
On stage: one time in the middle of a show, the power went out. So of course we had to stop and start again. Gave us a weird 20-minute intermission. Off stage: once we were driving in our bus in the snow and to get out of a pile of snow we all had to pile in the back of the bus to weigh it down to get out.

9. Tell us a memorable audition story.
One of my final callbacks for Groundhog Day was a solo two-hour dance call. It was so hard! I couldn’t believe it when it was only me and the associate choreographer, Kate. She was so nice, but she definitely pushed me past and out of my comfort zone, something I’ll be eternally grateful for. I cried during and after that audition. I was told I didn’t make the cut a few days later. And then, right when I accepted my defeat, for whatever reason, a week after that they had changed their minds.

10. Which California credit do you most wish NYC could see you in?
One of my favorite productions was an original musical called The Unfortunates. It debuted in OSF and then had a second life at ACT in San Francisco. The music was blues, jazz, and rap. The story was weird and awesome, I played a character with no arms. The set was unbelievable. It was unlike anything I had ever done or seen before. So many people had a deep love for it, whether working on it or seeing it and it was just so freaking cool.

Head Over Heels
Best Priced Tickets
Newer
De’Lon Grant Brings Insta Along For a Two-Show Day at Broadway's Hit Musical Come From Away
Older
Friday Playlist: Kick Off Your Weekend with the Music of Trainspotting Live