Introduce Yourself(ie): 10 Questions with Gettin' the Band Back Together Star Sawyer Nunes 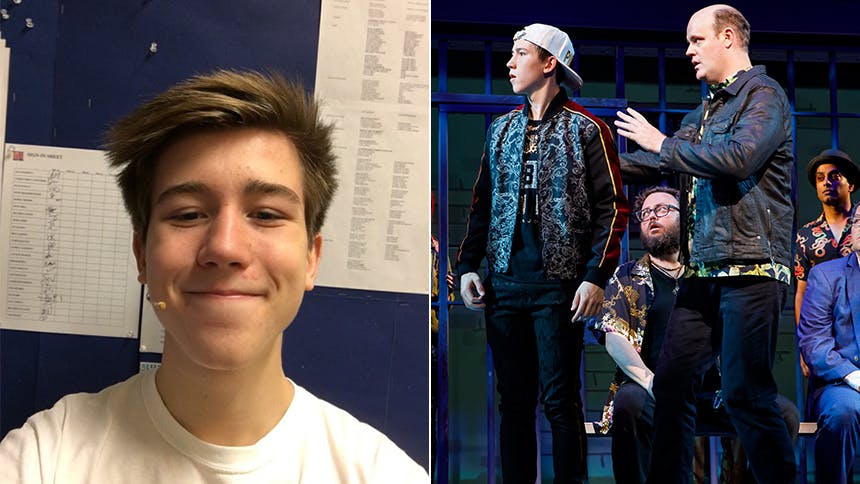 Sawyer Nunes is about to open his third Broadway show as the youngest leading character, Ricky "Bling" Goldstein, in the new musical Gettin' the Band Back Together

. Sawyer previously appeared in the OBC of Matilda as Bruce & others and Finding Neverland as George Llewelyn Davies. In addition to rockin' out nightly at Broadway's Belasco Theatre, Sawyer also has his own band IRL called Laundry Day, in which he plays and writes music. BroadwayBox gets to know the young actor-musician a bit better as he talks musical influences, balancing both passions, and his rock star moments in Gettin' the Band Back Together.

1. What moment in Getting’ the Band Back Together are you living your absolute best life onstage?
I love the top of Act 2 where I’m rapping the "Hava Nagila" at an Orthodox Jewish wedding. It is one of my favorite moments in the show, since I get to interact with the audience and have some freedom to really have fun and get a bit crazy on stage. Plus, I get rock out with the rest of the band. It’s such a cool moment.

3. How is this experience different than opening Matilda or Finding Neverland?
While I truly love all of the shows I’ve been a part of, I feel like I’m more of an integral part of the team here. Because I’m a bit older now, and also have a little more pivotal role in this show, I feel like I have full reign to make choices and be a true part of the crew of actors who are creating this new show every night.


5. Who inspires you most as a musical artist right now?
I really love artists like Childish Gambino and Frank Ocean. I especially admire the way Donald Glover can be so many things at once—an actor, musician, writer, director. I hope to be like that when I’m older.

6. If you had three desert island albums, what would they be?
I’d have to say that my three desert albums would be Blonde by Frank Ocean, Experience Hendrix by Jimi Hendrix, and The Best of David Newman by David Newman.

7. What’s the dream for when you are 40 (the age of the guys in the show)?
When I’m 40, I’d love to be a successful musician touring the world, but I’d also like to be acting and writing music for the stage and screen.

8. How do you balance your music career with the demands of Broadway?
While it can be challenging at times to balance my music and working on Broadway, I think they can actually compliment each other. My band LAUNDRY DAY will try to play gigs on the show’s off days, and I’ll always be looking to find ways to promote both of my projects.

9. What advice would you give to young performers who want to be on Broadway?
The advice I would give aspiring performers is that talent will only get you part of the way. Hard work is the MOST important factor. You have to be willing to fail repeatedly before your first success. Opportunities will present themselves and it’s your job to be prepared and ready for when they do so you can latch onto them and see where they take you.

10. If you could interview any Broadway composer/lyricist, who would you pick?
There are so many I love including Jason Robert Brown, Tom Kitt and Duncan Sheik, (whose music I was lucky enough to sing in Because of Winn Dixie at the Alabama Shakespeare Festival). But I would love to sit down and talk with Benj Pasek and Justin Paul. They are incredible pop writers and use beautiful orchestrations and melodies to truly satisfy the ear and stir up emotions inside you.

Don't miss Sawyer Nunes in Gettin' the Band Back Together at Broadway's Belasco Theatre.