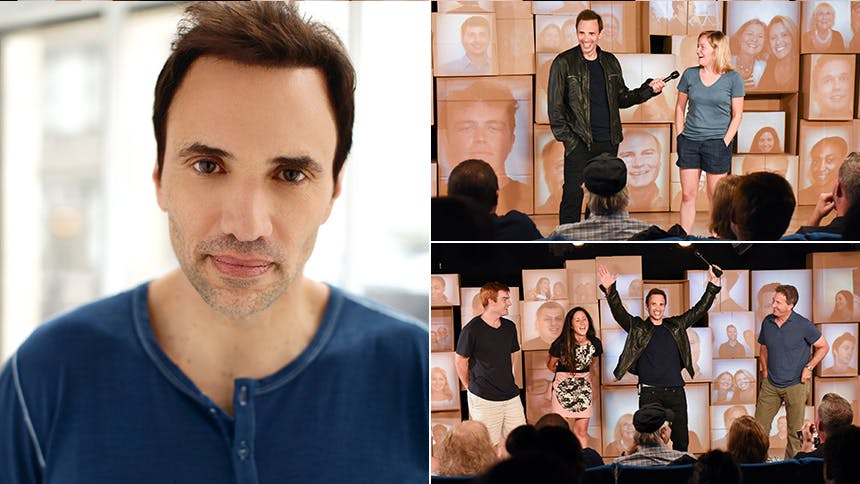 Emmy and Peabody-winning comedian Paul Mecurio is breaking ground with his interactive new comedy show Permission to Speak, running at off-Broadway's Jerry Orbach Theater through August 22. Paul improvises with audience members by bringing them on stage, getting to know them, and breaking down their barriers in a hilarious and sometimes jaw-dropping way.

BroadwayBox caught up with Paul to discuss the show, how he gets the party started at The Late Show with Stephen Colbert, and what it was like making the leap from Wall Street guy to late night comedy.

1. How do you break down audiences’ polite fear of offending or being PC so that they are fully on this journey with you? Any trick for dealing with an audience members who is already onstage but acting closed off?
People are conditioned now to be overly concerned about political correctness. I believe in correctness but not contrived political correctness, where people are looking for or creating a non-pc situation where it doesn’t exist. I think I break down people’s polite fear of not offending by creating an environment that lets them know it’s ok to speak bluntly and honestly without worrying about crossing a line by doing that myself. One isn’t politically incorrect because they speak openly and honestly with each other. We are living in a time now where some people want you to think if you are open and honest about something that means you are or could be politically incorrect. There is a big difference between offending and being honest and real, and while I never advocate offending, I do advocate and convey a sense that being honest is ok and needed.

Being closed off is ok. It shows who they really are, and someone being shy says just as much about a person as someone who is extremely outgoing. I recently had a woman who was very shy but kept grabbing the mic and wanting to hold it, and I let her and then she started to sing. It was a moment she wanted to take and I let her. If someone is clearly uncomfortable, I politely dismiss them and have the audience give them a hand. I never want to force people into an uncomfortable situation. It very rarely happens that someone is too nervous or shy to talk.

2. Do you feel there’s a shift in comedy during the Trump era? How has the administration changed your work as a political satirist?
I don’t think there is a shift in comedy—the shift is in how divisive the country is politically and socially. People won’t listen to the other side of the issue and that is a bad place to be. I think comedy is that steady grounding influence (as it always has been) calling everyone to the carpet. Right now, Trump is getting it because he is President and whoever is in power tends to get it the most. Of course, Trump has given us a lot of fodder for comedy as well. I don’t see much change in my political satire as a comedian due to this administration. I think the norms of political satire are the same as they have been—be a truth teller and perhaps a bit of a watch dog for the average person, using comedy to entertain and say something at the same time.

3. What advice would you offer to someone who has a day job but dreams of writing or pursuing comedy? What steps should be on their radar?
Do it! This sounds overly simple and obvious but it is not and not easy to start. You need to explore how much this “thing” you want to do is in you. As you do it, you will get a response to your work, and then start to realize if that response is fueling you to do more. If it is, then this thing you are passionate about may be a new career path for you. So, I would say write, write, write and perform a lot everywhere and anywhere—clubs, open mic nights, whatever. You will get better and really start to tap into your voice as a writer/performer.

4. Which of your podcast guests were you most nervous to speak with before the interview?
Paul McCartney. First, because the way the interview came about—it was a very last minute thing—it happened about two hours after I asked him to be on the show. I didn’t have a lot of time to prepare, a million questions were swirling in my head, and I knew I had limited time to talk to him. I had to tell myself before we started, “You are just talking to a musician and not Paul McCartney.” That calmed me down and allowed me to do an interview I was really happy with about his process of creating and writing music. I am endlessly fascinated by someone’s creative process, regardless of what they do.

5. What would people be surprised to learn about your job as the warm-up comedian at The Late Show with Stephen Colbert?
I think people would be surprised to know how many things I have to accomplish in the warm-up in a very short amount of time to get them ready so that Stephen can have a killer show. In a 10-15-minute span of time, they have to go from being “cold” to very energized, laughing a lot and understanding they cannot just sit and watch the show passively, but that they are the show—and they truly are. Stephen, the guests, and especially viewers, feed off that audience’s energy and response. As a TV writer myself, I know if the audience is soft and not laughing, the best written joke in the world will fall flat and sound like a weak joke if the audience is dead. So, a lot has to happen very quickly to get 450 people to coalesce around a common goal: having a great time.

Don't miss the incredibly unique and funny Permission to Speak off-Broadway through August 22.