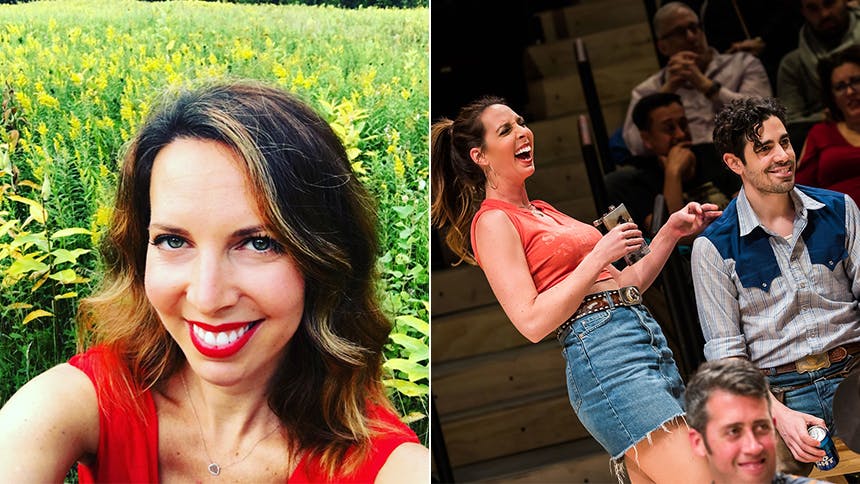 Mallory Portnoy makes a scene-stealing and hilarious Broadway debut as Gertie Cummings in the Tony Award-winning revival of Rodgers and Hammerstein's Oklahoma!

. A good-time gal from the territory, Gertie's distinct and obnoxious laugh becomes a running joke throughout the show. The Second City and Juilliard alum has been with Daniel Fish's radical, must-see production since its beginning. Scroll on as BroadwayBox gets to know Mallory a bit better as she discusses crafting her freakshow Gertie, the importance of this production, and creating her award-winning webseries.

1. How did you find Gertie’s infamous laugh?
It literally just came out of me at the audition. I had never made that sound before but, when I went in with a laugh reminiscent of Janice from Friends and Daniel Fish asked for something bigger, that's what spontaneously came out.  Somehow, I've managed to maintain it over the past four years.

2. What did you do when you found out Oklahoma! would transfer and you’d make your Broadway debut with the production?
It all happened in somewhat incremental steps, so it was kind of a slow burn rather than a huge moment of getting the news, but when everything became official I definitely cried tears of joy and danced a happy dance. I was actually standing outside the theatre about to see What The Constitution Means To Me with Rebecca Naomi Jones when I got the OFFICIAL offer, so that was fun for us to celebrate together! I couldn't be more grateful to be making my Broadway debut with a show that is just my whole heart and soul.

3. For you, what was the most memorable part of the night Oklahoma! won Best Revival at the Tony Awards?
Being at the party having just performed live, which was a dream come true in itself, surrounded by my OK! fam—who had been working on the show and believing in it for so many years—hearing our name called all together and just LOSING OUR MINDS. I couldn't stop screaming and hugging everyone and immediately FaceTimed my parents. It was surreal.

4. What was it about this production and what Daniel Fish was doing that kept you involved since its inception?
I will say that I wasn't a huge Oklahoma! fan before this production. To the point that I actually turned down my audition. Twice. But I remember being in the room our first day of rehearsal and knowing we were about to embark on something incredibly rare and special. As we continued on into previews at Bard, I started to understand that we were creating a piece of art that was speaking to audiences in a way I hadn't even realized being inside of it. Daniel's work gets to the underbelly of the story in a way that exposes not the best version of who we are as humans, as Americans, but who we ACTUALLY are, and he is not afraid to shine a light on those ugly truths. His creative team is just as genius, as is his ensemble of actors, so I would follow this production to the ends of the earth. We really are a family. And aside from the fact that it feels so artistically gratifying and politically important to be a part of, I also just have so much fun and LOVE playing freakshow Gertie!

5. How did your award-winning short Human Interest Series first come about? What was your goal with it?
My best bud and comedy partner, Matthew-Lee Erlbach and I had created a series years ago called Roger, The Chicken about an uber post-modern hipster who lives his life in a chicken suit.  We decided it was time to collaborate on something new and we wanted a story that would allow for us to play various characters.  A huge part of our friendship has always been sending each other links about people with odd jobs or hobbies, etc.,—just because we both find character studies like that so fascinating and hilarious. Thus came to be Human Interest, a moc-doc in the style of New York Times Op-Docs, that lovingly explores the eccentric outliers of New York City.  It is anthology like in that we play different characters (all based on real people) in each episode. The dream is to make it into a TV show but the goal is to get as many people to watch it and love it as possible and it JUST DROPPED so check out humaninterestseries.com to watch!

6. Which TV series do you consider nearly perfect? What do you love about it?
Fleabag is a masterpiece.  Every element is perfection.

7. Tell us a memorable audition story.
I auditioned for a pilot of a show that was set in the ‘50s and it said to dress in the style of the period, so I, for some reason, decided it was high time to try wearing a wig. The second I left my apartment I was like, why are you wearing this wig?! But I committed to it! When I got there, I ran into several people I knew in the waiting room, feeling so awkward about...the wig. I waited 40 minutes before I went into the room with the casting director, who had just gotten what appeared to be a very frustrating call and was not happy. We did the scene, and then she asked if she knew me and I just blurted out, “YES, I'M WEARING A WIG! I'VE NEVER DONE THIS BUT I'M WEARING A WIG.”  She shrugged it off and said it looked great, but I felt like a REAL IDIOT.

8. What’s been your biggest onstage mishap in your time with Oklahoma!?
Once I was making what was supposed to be a very seductive, threatening walk upstage towards Laurey, and I slipped on a piece of corn and almost fell on my face. It was not sexy at all. I looked like a flailing goose.

9. You grew up an equestrian. What’s one thing most people don’t know about interacting with horses?
They love mint candies!  People think it's such a prissy sport, but I have been thrown, dragged, trampled, and lived to tell the stories!  I think that's why I can endure the rejection that comes with being an actor.  I've really grown up on that "if you fall off the horse, you just get right back on" mentality.

10. Who inspires you professionally?
Allison Janney is my idol.

Hurry to Broadway's Circle in the Square Theatre before January 19 to see Mallory Portnoy as Gertie Cummings in 'Oklahoma!'

Oklahoma!
Best Priced Tickets
Newer
Beatboxer Kaila Mullady Takes You Behind the Scenes for a Two-Show Day at Broadway's Freestyle Love Supreme
Older
Friday Playlist: Celebrate 25 Years of Disney on Broadway with the Iconic Ladies From Each Musical