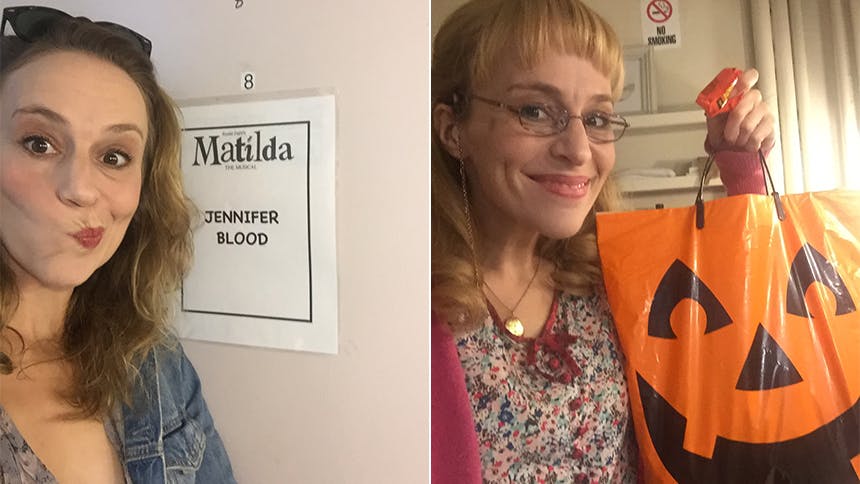 After starring on the national tour, Jennifer Blood brings her Miss Honey to Broadway in the Olivier and Tony Award-winning musical Matilda

. It's her third time on Broadway but Matilda's loving and supportive teacher is her first starring role on the Main Stem (she was Sutton Foster's standby in Violet and a vacation swing in the Tony-winning Gentleman's Guide). BroadwayBox caught up with Blood to talk about joining Matilda's Broadway company, her favorite regional role, a memorable Halloween costume, and making real stage magic.

1. First thing I did when I found out I landed Miss Honey on Broadway:
I was watching Maria Bamford's Netflix show at my friend Olli's apartment. I went into a small tailspin because I was supposed to leave town in a week for another job and I didn't want to leave them high and dry. Olli has a series of photos with me holding my head in my hands and staring wide eyed at my phone.

3. Something I learned on the road with Matilda that informed my Broadway performance:
I learned so many things! How to pace myself through a five-show-weekend. Not to throw my neck all the way back when I get dipped.

4. The coolest & scariest part of being Sutton Foster’s Violet standby was:
The coolest part was getting to learn the show by watching Sutton night after night. I had never learned a show that way before, and it was so much fun trying to glean the direction from all the nuances I could catch in her performance. What a masterclass.

The scariest part was the idea of going on. I had never understudied before and when I got the call that I had the job, I remember jumping up and down and yelling into the phone at my agents, "I'm gonna be on Broadway!?!?" And then hanging up and going, oh god, I'm going to be an understudy. I was terrified.

5. My most memorable audition story:
There are a few gems, but here I will tell you about what I call the "scabies" audition. It was for a short film, I don't remember the role, but I did a monologue and then they asked me to improvise about my life as a junkie. At the time I knew next to nothing about being a junkie, (not that I am an expert now, but at least I have seen Breaking Bad), so I rattled on for a good three minutes about sleeping in ATMs, buying drugs from a kid in a park, and then, someone had recently told me a story about their friend getting scabies, so I threw that in. I remember very seriously saying, "I got scabies" and then throwing my arms up and yelling "I got scabies!" I didn't even know, (and, truly, at this moment can't remember), what scabies is. I finished and they said, "Wow, we will definitely be in touch".

...Still waiting on that phone call.

6. My favorite Halloween costume:
In ninth grade I woke up the morning of the Halloween parade with the inspired idea that I would be the tooth fairy. I put on a white leotard and tights, taped dollar bills and toothpaste to myself, wrapped dental floss around me and made some wings out of hangers. I was really proud of that costume.

7. The thing I hear most often at the Matilda stage door:
"This is his/her first Broadway show!" Nothing makes me happier. I always tell them I hope it makes them want to see lots more.

8. Regional role I wish New York audiences could have seen:
Maria in The Sound of Music in Chicago.

9. Cast recording I absolutely wore out in high school or college:
I'm going to tell you that in fourth grade I wore out my parents' RECORD of the original Chicago. And just after college, my CD of The Light in the Piazza.

10. My pre-show routine at Matilda includes:
A little bit of stretching, a vocal warm up and then I like to set an intention for the night—for example, to really focus on listening, to find three new things, to make it feel expansive. My favorite instance of these intentions in action happened one night when I was on the tour. I set the intention to experience a moment of magic onstage and for it to show up in a way that it was completely apparent that this was the moment. That night we had technical difficulties and the chalkboard at the end didn't work—there was no writing. So David, our Trunchbull, saved the day by acting like his hand was possessed and he wrote it all out. The kids went with it and read as he wrote. It was such a heroic save and a great moment of everyone working together. I was in tears, and certain that that was the moment I had asked for. Real Stage Magic.

Get yourself over to Broadway's Shubert Theatre before January 1 to see Jennifer Blood as Miss Honey in 'Matilda'.