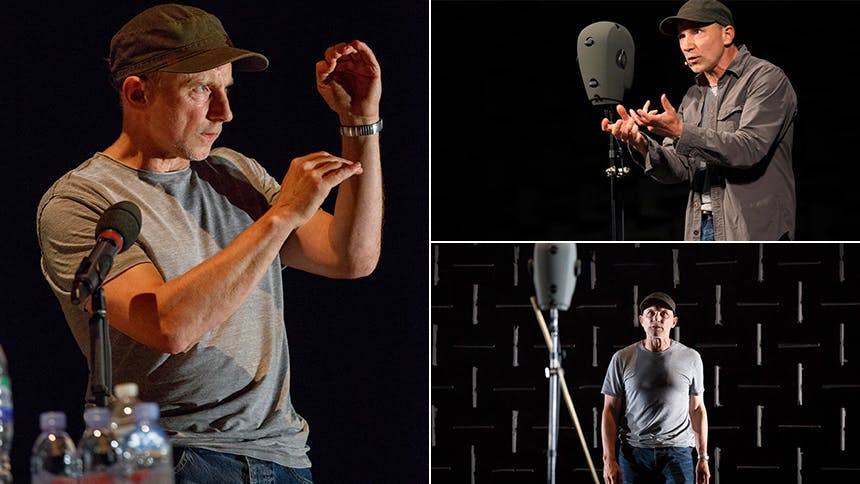 One of the most unique and thought-provoking plays on Broadway right now is Simon McBurney's acclaimed solo show, The Encounter. Using innovative aural technology, McBurney brings audiences deep into the Javari Valley of Brazil as he tells the true story of National Geographic photographer Loren McIntyre and his experience with the Mayoruna tribe in 1969. As an actor, McBurney appeared in numerous films and TV shows, including the Harry Potter and Mission Impossible franchisees. He's a founder and artistic director of Theatre de Complicite, and he previously directed two shows on Broadway, receiving a Tony nomination in 1998 for The Chairs. Below, BroadwayBox chats with McBurney about creating The Encounter, visiting Brazil, and London fans vs. New York fans.

1. What was the most memorable conversation you had with someone while researching The Encounter? Is there a particular interaction that immediately springs to mind?
There are dozens. I spoke to neuroscientists about the consciousness the brain and communication without words; environmentalists about what is happening to the Amazon basin; indigenous rights organisations about the violence perpetrated on tribal peoples everywhere; physicists about the nature of time; and writers about the nature of storytelling and fiction....

But of all these encounters, my meeting with the Mayoruna people of Marajai and the Yawalapiti people of the Xingu, both communities living deep in the Amazon basin, were the most inspiring.

There is too much to tell here...But one particularly striking thought that both peoples told me was that when they think of their consciousness, which we in the west consider to be located somewhere behind our frontal lobes, in other words right in the centre of our HEADS—they see that completely differently. They see no frontier between the experience of their inner lives and world around them. The forest is their mind and their identity as much as what happens inside their heads. What it implies is important for us as a society and from which we can learn. EVERYTHING around us is alive. And we, of necessity, are continuous and connected with that LIFE. But all too often we regard the outer world as something separate from us, 'product' to be exploited, land to be developed, in other words we do not see as alive, but simply as 'stuff'.

2. Was there a passage from Petru Popescu's book Amazon Beaming that was hard to cut from the show?
So much of it!
Anything you seriously debated putting in or leaving out?
Of course I debated the whole episode of McIntyre discovering the source of the Amazon, and when he meets Cambio six years later when working on another project... and more, much more than that.
Why in the end did you decide to leave it out?
Because I decided to make a show that lasts one hour and 45 minutes. Although I did seriously consider making a show that lasted six hours...Who knows I might still do so!

3. The show premiered at the Edinburgh International Festival before transferring to London's Barbican. Now it's here on Broadway. What was your biggest concern in telling this story on an international scale?
Particularly if you are playing this piece in a non-English speaking country there are a ton of words... The piece was inspired from a point of view of form by the work of Spalding Gray. Watch Swimming to Cambodia—he was a brilliant and hypnotic storyteller.

4. Which of your credits are you recognized most for in public, and does it change when you’re in New York vs London?
Yes. It changes a lot... I guess in London I will still get people stopping me and giving me the Woody Allen line "I love your work; especially the early funny stuff."

Where as in New York everyone kind of got familiar with my work from Street of Crocodiles (adaptation of the short stories of Bruno Schulz), Ionesco's The Chairs (which was on Broadway) and Mnemonic. There was lots of stuff after that in NYC but that I think made relationships with the audience here...and then there are people who know me from my films...

5. In retrospect, what was the most important moment during your 2014 trip to Brazil?
Being in virgin rainforest for the first time in my life. Sitting listening to the song of the forest with the Mayoruna. Seeing Jaguar shit that was fresh from a few hours before... emptying my brain...

You only have until January 8 to experience Simon McBurney in 'The Encounter' at Broadway's Golden Theatre. Then he brings it to Australia, New Zealand, Los Angeles' Wallis Annenberg, San Francisco's The Curran, and Ann Arbor Michigan.