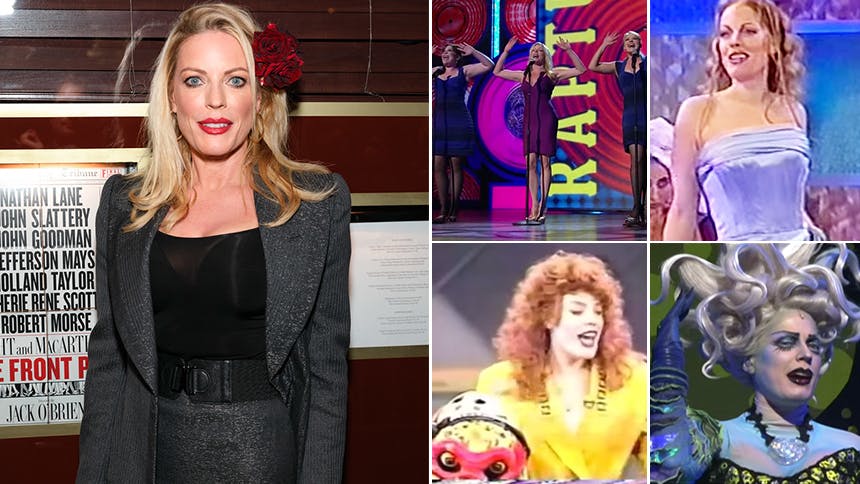 Three-time Tony nominee Sherie Rene Scott returns to Broadway after a five-year absence as Mollie Malloy in the star-studded, critically acclaimed revival of The Front Page

. Her scene-stealing turn as a Chicago "tart" in love with a convicted killer marks Scott's first-ever role in a non-musical on Broadway, and she slays. BroadwayBox caught up with Scott to reminisce about some of her iconic musical credits and get the stories behind six of her most popular YouTube clips.

All of these were great experiences. It’s so nice to look at them and think of the great times and love I shared with so many people. I hope everyone that sees these videos sees that it’s not just me but great, great talented people in all of those.


I love this says PBS. This was the Drama Desk Awards and it was in some high school auditorium. So you think it sounds very glamourous but in fact we put our coats in lockers right before this because it was the only place to put our coats. I do remember when I wave, I’m waiving over to Norbert & Daisy Prince, our director. Jason [Robert Brown] played almost every show for The Last Five Years off-Broadway, so you could imagine having the composer there every single day. He was actually very kind to me considering I had to learn to sing this way, the belty kind of way. Oh, and I gave that dress I’m wearing to Betsy Wolfe. I actually loaned that to her so if you could ask her to get that back to me—anytime here, soon would be good. It’s my one black, slinky dress.


First of all, know that during this sort of thing, when you see performances like this on shows, you have a whole new track you make and whole new choreography. It’s shorter than the original song; there’s normally a big runaway and a 24-second costume change and all this amazing fun stuff. So we had to learn all new choreography just for this performance. So right now I’m thinking, “What am I doing? What did we cut? Oh my god, the cameras can see through all angles, and I just realized that as I’m standing on stage.” I am looking at the assistant dance captains and hoping I’m going in the right direction. Then I’m thinking, “How am I going to crawl because my knees are on my dress? Stupid dresses. My dress is going to fall off because I’m pulling it down.” Bob Crowley made that show for me. I’m not a dress wearer and I’m not a princess, so I’m the opposite—and of course when you look at me you think Egyptian princess. (That’s the first thing everybody thinks.) But I loved singing this song and people love this song. I don’t ever like to repeat things but in Everyday Rapture we found a clever way to do it so people could hear it and say, “Oh, the bitch could still sing.”


Oh my god, Tyler [Maynard] and Derrick [Baskin]. We had the most laughs backstage; such great times with that show. Of course, Dick [Scanlan] and I wrote a role for Derrick Baskin in Whorl Inside A Loop—he’s a great actor and a dear, dear friend. Sierra [Boggess] is still one of my best girlfriends too. How great that Disney really attempted to do art and commerce—they brought in people in from the opera world. Tom Schumacher and Disney could just put up things and know they are going to make money, but they really wanted to stretch and expand the vision here on Broadway. Sometimes it goes over well, and sometimes it doesn’t but I so admire that. There was a lot of ways they could have gone with [Ursula]— I wanted to make her a combination of Iggy Pop and Joan Collins. I’m sure she would love Donald Trump—she’s the ugly underbelly of America that can still put on a good show. That was my Ursula.

“Up the Ladder to the Roof”, Everyday Rapture at the Tony Awards, 2010


This was the best way to end the show ever. Dick [Scanlan] thought of that song. We had other songs up into previews. Then when he suggested it, I thought, “Now the show is complete.” Again this is another track so it’s slightly different. You’re performing something you don’t know that well and it’s harder than learning something new because your body wants to do what it’s been doing a 100 times. The song is different and the choreography is different—and as you can tell no one would call this choreography except me, which was so annoying to Betsy and Lindsay. I believed in what we were doing. When people say this was a one-person show, it was so not. We were trying to make a bigger spiritual statement that was more universal. We all believed in what we were doing. And Betsy and Lindsay. We wanted to cast the people we thought could hold their own show—that was the mandate Dick and I gave ourselves when we were auditioning people. When Betsy and Lindsay came in, I knew how unique and special they were. Then I had to ask when their birthdays were to see how we’d all get along, and immediately we just all loved each other so much. It was just a heavenly, heavenly experience.


My dream is to sing with a band. Todd Almond is just the best person and such a genius and so inventive and talented and kind and patient. We are talking about [doing another show. It’s just a matter of time and schedules. So, I was doing this project Piece of Meat (writing about being a vegetarian and wanting to eat meat) and my life kind of blew up. So this concert is actually in the midst of finding out that I thought people who really, really loved me really didn’t love me, to be concise. I kept plugging forward through this. I knew there was live stream but I thought let’s do love stream, because no matter what’s going on I want to try to come from this place and surround myself with people who are supporting me through this shocking time. So in the making of this album—which is my last one for Sh-K-Boom/Ghostlight  Records, which I founded—I knew this would be the last thing I do with that, so these are people who went through a lot with me. Then all the songs had a different meaning. I started writing it without knowing anything, and, by this time, things are starting to coming to light as it were. But it ended up being the greatest thing that ever happened to me.

Coming Out of Their Shells on Oprah, 1990


April meet Oprah. This aired on a Thanksgiving Day because so many people saw it, unfortunately. I was like 21 years old, and my two worlds were separate. I had my rock ‘n’ roll music world and my theatre world was separate—I was going to do plays. So this job came up that I thought was a voice over, honestly, and I thought, “That’d be cool to do. I can play this in a cartoon.” Then as I started to get into it I thought, “Wait we are playing Radio City? How? Are we backstage with mics?” So what I learned from this is you do have to be careful what you ask for. You can say I want to sing at Radio City. And God (if there is a God) will grant you that wish, but you just have to be very specific. I didn’t know I’d play Radio City singing beside four giant turtles and doing the bump with a giant rat. You have to be very specific with your wishes.

And I have to say that wig…that wig. I took care of that wig. It went to so many places that are so wrong, and I just smacked it on my head. That thing was in a suitcase, it came out, and it got stuck on my head on Oprah Winfrey, and I’m not kidding. You believe it immediately when you see it. This was before we knew these things would last and anyone would see them again.

There’s a question she asks at the end about the turtles and she looks right at me. She knows she has about 20 more seconds and she asks it and looks at me with this face of answer this question fast. And I said something what I really believed at the time—that kids love them because they are green good doers that are beyond color and even human frailty—but it’s ridiculous and absurd. I literally wanted the guys I dated after this to think I did porn rather than to know I did this. My mom would start to talk about it and I would say, “Shut up! Don’t talk about it. Don’t tell them.”

Get over to Broadway's Broadhurst Theatre before January 29, 2017 to see Sherie Rene Scott in 'The Front Page'.