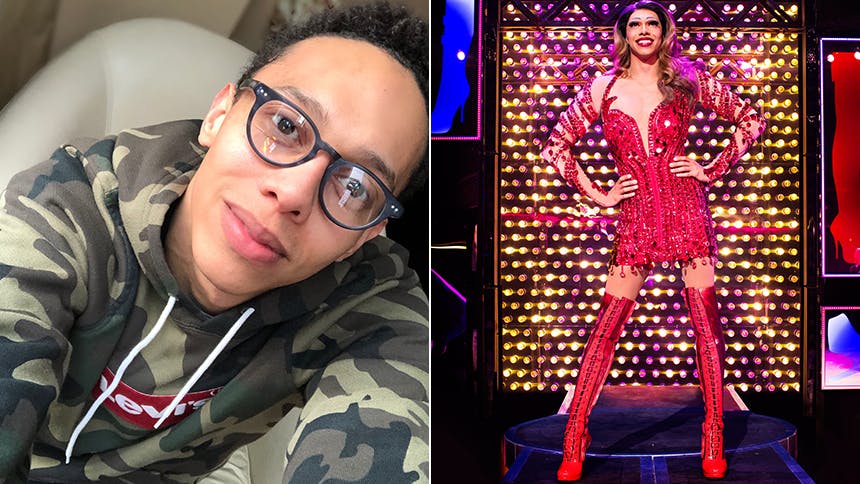 After playing Lola in Australia and the West End, Callum Francis makes his Broadway debut reprising his Helpmann Award-winning performance for New York audiences in the Tony-winning hit Kinky Boots

. He stars opposite OBCer Andy Kelso through March 17.


BroadwayBox caught up with Callum to talk about his "Heidi Klum Lola", performing Kinky Boots around the world, and immersing himself in NYC culture.

1. What feels different about Kinky Boots on Broadway vs the UK and Australia?
The strange thing is the only thing that feels different (because it is) is the theatre and my view from the stage out to the audience. The show itself always feels the same. The message and the heart of the show is so, SO universal that no matter where on the planet I have been lucky enough to play it always feels like home.

2. Who was the first person you told after finding out you’d make your Broadway debut reprising Lola?
As soon as I got off my phone call to say I have been given the chance to play Lola again ON BROADWAY, I told my gorgeous other half Ainsley (who is also soon to make his Broadway debut) As a performer himself, he knows the bucket list feeling. Then, naturally, I called my parents, told them to take a seat before I told them my news.

3. What do you feel is distinct about your Lola?
I like to think I make a convincing woman, with the help of the amazing costumes and make up. I watched a lot of pin up girls and classic glamorous women in movies. I then based my Lola on parts of all of them. The way she moves and holds herself is what I think is distinctive of my Lola. Designer Gregg Barnes calls me Heidi Klum Lola, I mean, that’s something I’m thrilled with.

4. What is your pre-show like? Do you have certain music or rituals when transforming into Lola each night?
I like to get to the theatre two hours before curtain, or around that time, just to slowly warm up my voice and body. Then begins the make-up. I am lucky that the small team of people that make me into Lola, in every production, become a close unit. We become a little family and that’s how I like to spend my time before the show, chatting and laughing—just talking about how we have spent our days and solving each other’s problems. Music plays a part as well; Ariana Grande in my jam, she’s up there with little mix!

5. Who were the Broadway/musical voices you were obsessed with growing up?
Jeremy Jordan has a voice I have always listened to and loved/wanted. It’s just effortless and beautiful. I would always YouTube Eden Espinosa—obviously, I could never sing like her as she is a lady but I loved her. Luckily, I got to work with her and now she is one of my pals. Love her! She knows I’m obsessed with her, but she is equally obsessed with me. HA!

6. What’s been your biggest Kinky Boots mishap in your years with the show?
Obviously, the show for me is in heels, so there is always a chance for mishaps. HOWEVER, I have never fallen over in my heels until Broadway. During “Sex Is In The Heel”, I took a tumble and tore my stockings. Like a true Lola, I got straight back up and carried on. Inside my mind was chaos. HA! In three years of the show, I had managed to avoid it.

The best line mishap I’ve ever had was again “Sex Is In The Heel” in the West End production, my brain suddenly forgot the lyrics and I literally just made sounds—kind of like a scat sound, only terrible.

7. Tell us a memorable audition story.
My second recall for Kinky Boots, in a small studio in London, I was called in to do scene work with associate director DB Bonds. We did the bathroom scene before “Not My Father’s Son” and he cried. When I realise they were good tears (thankfully), he hugged me and said, “No matter what happens, thank you.” After my opening show on Broadway, the first person in my dressing room was DB with those same tears.

8. What’s been the best part of joining the Kinky Broadway company, many of whom have been together since opening?
The Broadway company have been so welcoming. It’s been two weeks and I feel like I have known them a lifetime. It’s been a dream come true for me to make my Broadway debut with this show playing this part. Lola has become a spirit animal for many around the world and also for me. To be able to share the stage every night with people who were there at the start and created these factory workers and angels just makes me fall in love with my job all over again.

9. What is your pop culture obsession right now?
I am a huge geek and I’m proud of it. My crazy obsession lies with baby Groot. He has my heart. Anything to do with him I love! As I write this, my little figure of him is sat watching me by the TV! JUST LOVE HIM!

10. What excites you most about living in New York? What’s in your NYC bucket list while you’re here?
I have been so lucky to travel in my career, to so many different places. But one thing me and my partner like to do is immerse ourselves in the local culture and eat all the foods each place has to offer. My days off will be spent sightseeing and living as a true New Yorker. If anyone has any must do’s, reach out to me on social media, I am all for trying everything. New York has been a dream of mine for years so the fact that I am answering these questions from my New York apartment is exciting enough. I’m just so grateful.