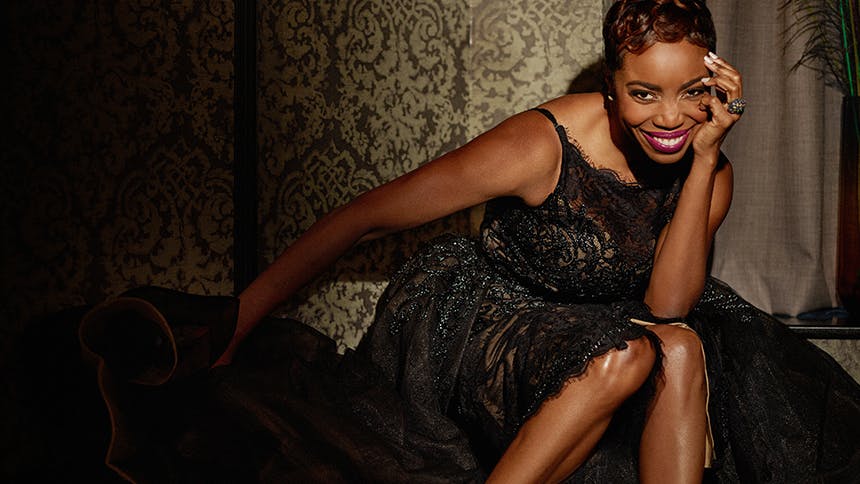 Tony Award winner Heather Headley won over a legion of Broadway fans with her performances as Nala in The Lion King, Aida in Aida, and (most recently) Shug Avery in The Color Purple. On November 1, Heather takes the stage at Brooklyn's Kings Theatre for her new musical theatre concert Broadway My Way

. Based on her upcoming album of the same name, the show features Heather singing “She Used to Be Mine”, "All the Man that I Need”, “Somewhere Over the Rainbow”, "For Good", and more! (Needless to say, it will be an event!)


BroadwayBox caught up with Heather at NYC's The Langham Hotel to discuss choosing tracks for Broadway My Way, meeting young girls who play Aida at their schools, and how Funny Girl became her gateway musical.

1. How did it feel to come back to Broadway in The Color Purple after a 15-year absence and be so embraced again by the community, the critics, and the fans?
That [first] night, I was nervous. I was like, “Oh gosh, it’s been a minute.” We’d done The Bodyguard in London but I hadn’t been back onstage in New York. That night I was so scared. Then my father-in-law sends me a note half way through the show, “You’re going to be amazing. I love you so much! And Oprah is sitting right in front of me and she’s loving it.” I’m like, “Nooo, you’re not supposed to tell me that!” [Laughs]

I was incredibly nervous, but my husband had said something to me. He said “This is not necessarily about what they think of you; it’s about the fact that you’re coming back to say thank you to them. After all these years and everything that’s happened, this your way to come back and say thank you.” It really was surreal that night.

2. When putting together your new album Broadway My Way, which song did you immediately know had to be included on it, and which track almost didn’t make the cut?
I always knew “Somewhere Over the Rainbow” would be on it because I do it a lot with Andrea Bocelli and in a lot of my shows. I knew “My House” and “Look to the Rainbow” would be on there because I do those quite a bit as well. The two I did not think we’d pull off were “All the Man That I Need”—I was concerned because it’s still Whitney to me—and “She Used to Be Mine”.

I was reticent because "She Used to Be Mine" is still in the theatre and people still sing it a lot (men and women) and the theatre community has a hold on it. People are like, “This is our baby, don’t mess with the baby.” After we recorded the vocal with the band, I sent it to a very good friend of mine here in New York who knows a lot and has his boots planted firmly in the ground. I said to him, “Will you listen to something for me? If you think I shouldn’t go ahead with it, tell me, and I won’t.” He texted me back with, “You better do it!!”


3. What is a Heather Headley vocal warm up like?
It’s bad. I hate warming up because I never used to. For Aida, I’d literally just like ga-ga-ga-Ga, and that’s it. "Ok, she’s ready, let’s go!" Now that I’m a little older and my voice is a little more diva—I only carry her around; I have nothing to do with her. She runs the rest of my body—she demands a longer warm up now. There are trills and a swell check from my doctor, and then I do a little opera. I think the opera tells me where we are. Then I do some belt stuff, but I don’t overdo it because I don’t want to run it out. I’m supposed to warm up every day but I’m so bad—it’s so boring.

4. What was the first Broadway album or cast recording you were truly obsessed with growing up?
The first Broadway cast album I had to listen to was Funny Girl because I did that in school. My teacher brought me the record and said, “I think this is the best way to learn it.” It was smart because he gave me the record and the libretto, and I would sit down at night and listen to it. But what it also did was put Streisand smack in the middle of my head. So at first doing the show, I was all Barbra.
Well yeah. Don’t you think every high school production of Aida girls are trying to sound like you?
I guess! That’s the weirdest part. I went to talk at a school one time and one of the kids was singing it, and I thought, that sounds so familiar. Oh, I think I know where you got that. But I’ve had kids all flustered telling me they’ve done Aida in school. And I’m like, “Ok, calm down. Don’t worry. I’m Heather.” And they gasp, and I thought to myself, oh my gosh, if Barbra Streisand came to my school after I had listened to “People” 45 billion times, I might have fainted.

5. Is there a moment in your career you said no that looking back you wish you had said yes?
No, because I think all the no’s have led to a beautiful yes. I think no’s are just yes on hold. Every time we’ve decided not to do something, I’m glad because something amazing came up. In the end, I’m happy.

Don't miss Heather Headley in 'Broadway My Way' at Brooklyn's Kings Theatre on November 1 or Boston’s Emerson Colonial on November 3. As a bonus, her full album will be available for purchase exclusively to concert attendees, so get on it!