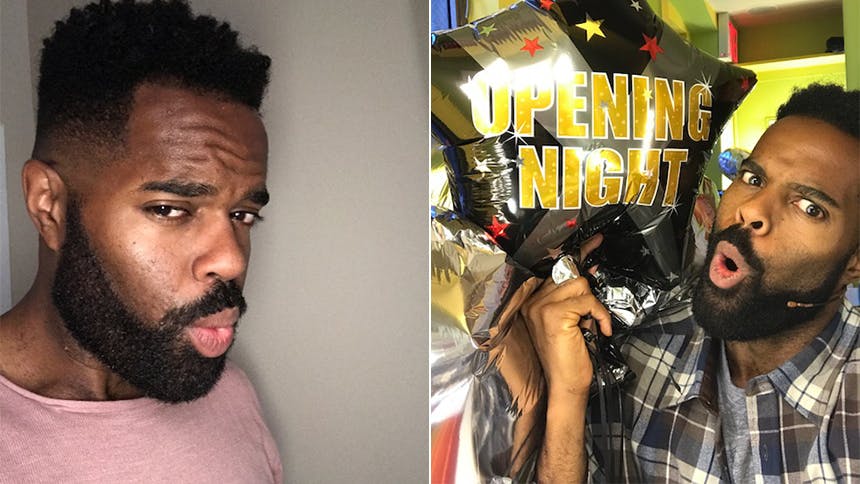 De'Lon Grant makes his Broadway debut as Bob & others in the hit musical Come From Away. The actor and photographer spent three years touring around the world with Jersey Boys and received the 2017 IRNE Award for Best Leading Actor for his performance as Haywood Patterson in The Scottsboro Boys. Scroll on to get to know De'Lon better as he talks to BroadwayBox about joining the tight-knit Come From Away company, sharing the experience with his team of cheerleaders, and his travels abroad.


1. Come From Away first appeared on my radar:
I’m a little embarrassed to admit this, but it wasn’t until my initial audition that I dove into learning about the show. I’d heard of it from all of the buzz about it being a great show, but I hadn’t had the space in life to truly discover it until I had the opportunity to audition and work on some of the material.

3. The first person I called when I found out I’d be making my debut in Come From Away:
I called my sister and had her call my mom and my other sister so that we could do a “party-line,” (Is it still called that? I’m child of the '90s) and I told them together. It wasn’t real until I was able to share it with the cheerleaders that continue cheering even when I can’t muster the strength to stay in the game. This means so much to the four of us.

4. The coolest thing about stepping into a company that has been performing this together for years:
This company of people is so supportive and giving to one another and they have continued to shower that love onto me. One of the coolest things is seeing how other actors pick up the ball if and when another person drops it. I’m only a few weeks in so, needless to say, I’ve messed a few things up, but everyone has filled in my deficits, patted me on the back and just said, “Welcome to the family.” The love in this company is immense.

5. The most memorable part of my debut performance on August 4:
More love from the company to be honest. I had a fairly quick and focused rehearsal period and, being a fairly type-a personality, it was hard for to really take in and enjoy the moment. I was more focused on memorization, getting things right and trying to make the transition smooth. It wasn’t until I was bowing after my first performance that I really took in the gravity of what just happened and allowed all of the emotions I was stifling their true breadth. The roar of applause and support coming from the audience broke down some of those walls as well. But it was after I exited the stage that shocked me. The company surrounded me, began cheering, giving me hugs and screaming congratulations. I couldn’t contain how full my heartfelt—I immediately burst into tears, as did some of them.

6. Four things I like to have with me when I travel:

7. My passion for photography was sparked:
I had just entered my second year of touring with Jersey Boys and I discovered that I needed another creative outlet. Since I was traveling so much I thought it’d be cool to kind of document some of what I was seeing in each city that we were in. I quickly found out, however, that I was more interested in taking photos of people as opposed to buildings and sunsets. Then a few friends asked me to take some shots of them and I loved the creative control involved creating a photo.

8. The city I’ve visited during the Jersey Boys tour that I could actually see myself living in:
Seattle, hands down. It has many of the cultural amenities that I need from a city: a great arts scene, good food, a decent level of diversity, progressiveness; but it also has a connection to nature and the water, which gives me a sense of freedom in life.

9. Role I’ve previously played in my life that I’d love another turn at someday:
I’d like to dig into some Shakespeare again. I find it to be some of the hardest material to do well. I was double cast as the love interest and the villain, of sorts, in production of Cymbeline (Posthumous and Cloten). It was a great challenge. I would love another chance to try and make that dueling pair come to life.

10. On my day off, chances are I am spending my time:
Daydreaming about getting a dog and catching up on Game of Thrones.

Don't miss De'Lon Grant in 'Come From Away' at Broadway's Schoenfeld Theatre.