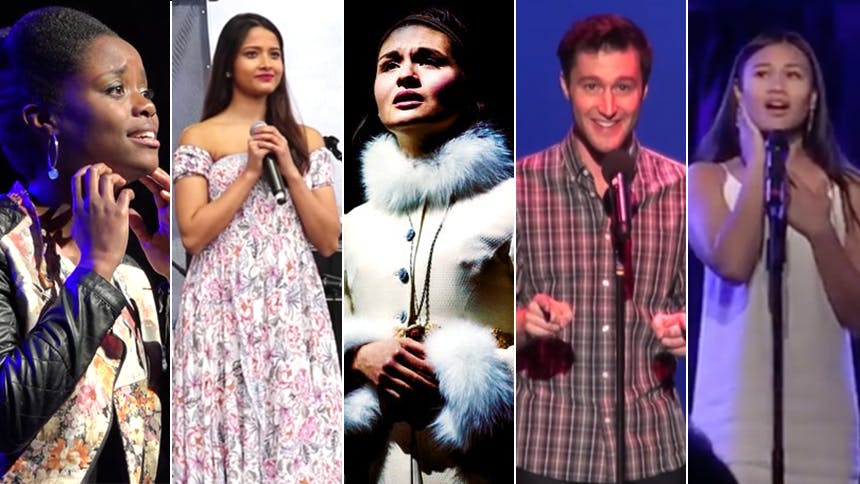 Time is seriously running out to see the groundbreaking, Tony-nominated musical Natasha, Pierre, & the Great Comet of 1812

—we are talking mere days and hours left people. To send off this stunning piece of art, BroadwayBox looks at 20 of YouTube’s best versions of Natasha’s big soaring solo “No One Else”—it goes without saying the “You and I” crescendo was a deciding factor on who made the cut.


Kicking it off with the Tony-nominated star of the Broadway production and her emotionally infused performance. This was from two years ago BroadwayCon, the first time New York got to hear Denee sing from Comet. Major acting moments.


Shoba is Denee’s fierce AF understudy at Broadway’s Great Comet. It’s her B’way debut, and after hearing this she better be back soon. Just wait till she gets to 3:25.


Lauren (aka one of the best Sherries Rock of Ages ever had) is also understudy to Natasha in Great Comet, and while this video does the performance no favors, it’s ALL ABOUT THESE VOCALS. All that power, all that control. Get it, Lauren!


Devin does a really wonderful cover. He adds a frantic energy of a man newly in love—less introspective than the ladies that came before—it feels “Maria” from West Side Story in a way now. Bravo, sir.


This performance from the Miss Saigon actress is pretty damn fantastic. That final “You and I” around 3:40.


You don’t need to speak Portuguese to appreciate this version—also what is this production?


Come through production values! Not only does this look super legit but she sounds AMAZING. Props to whoever directed this video.


Love how much of his range he shows us with this number. Lots of little moments and flair. It all feels so full and layered.


TBQH: I can never resist a Playbillies arrangement. These guys are the best.


She’s giving a full-out performance here. I’d want to see her in a production somewhere. She gets it.


Love the quality of her voice and the performance is so committed and real. Those “You and I’ are


She really takes you on a journey with this song and it was one well worth going on. Something about the whole thing gives me an Eponine singing "No One Else" instead of "On My Own" flavor.


Wow, Andreas made this sounds like something you could hear on the radio. I’d buy a single of this version.


Mallory nails it. Love her control, her clear tone. It’s all there.


So operatic and so beautiful.


This Amazing Grace alum sells the excitement and wonder of the lyrics. She feels like a young woman newly in love.


I really like this version. Something about it spoke to me. Maybe the way she’s styled, it makes the song feel fresh.


His version of this song sounds do distinct and so classic Broadway. It’s really remarkable how versatile this song could be.


Yes, Lauren appears again but this time she’s with Comet castmate Josh Canfield in a duet arrangement that just had to be included.

Don’t miss ‘Natasha, Pierre, and the Great Comet of 1812’ running at Broadway’s Imperial Theatre through September 3.