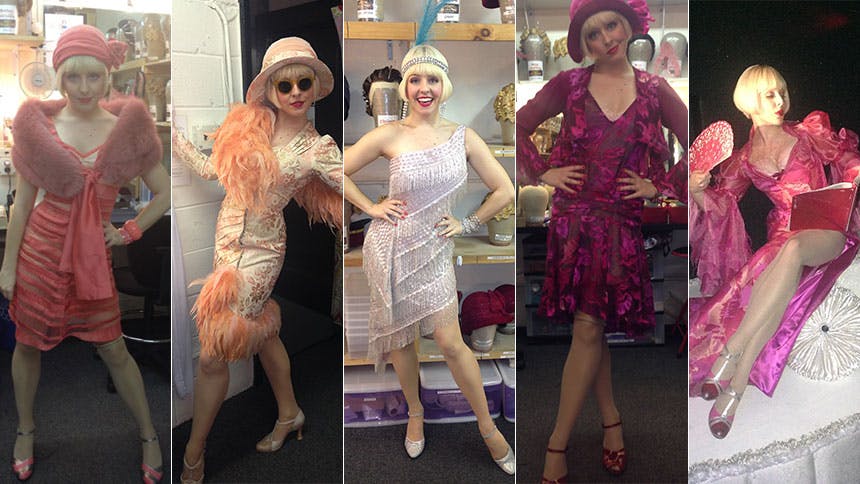 You know the saying it takes someone super smart to play someone super dumb; well it takes one hell of a talented actress to play Bullets Over Broadway’s no talent showgirl Olive Neal, as the luminous Heléne Yorke proves nightly at the St. James Theatre.

And gee baby, ain’t Yorke good to us because she agreed to bring BroadwayBox inside Olive’s wardrobe to show off all her fabulous (and Tony-nominated) William Ivey Long fashions. 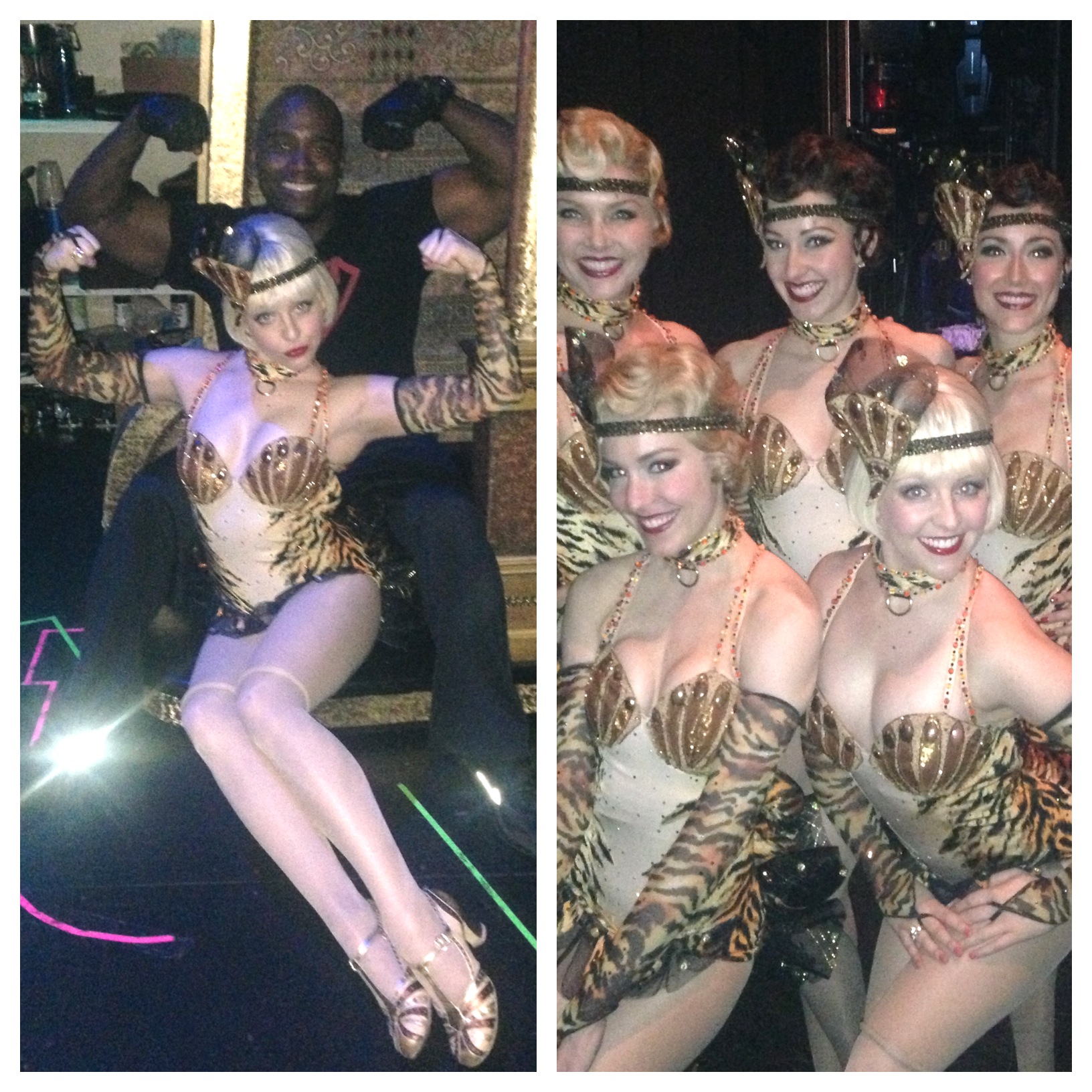 Olive starts the show dancing with the girls in Nick Valenti's night club in a song called "Tiger Rag." It's a naughty little ditty with lyrics like "stroke its fur and make it purr." It's frankly cruel to make me wear this tiger body condom next to all the perfectly toned leggy girls, but I'll take it as a vote of confidence! I really love the tail trick this little outfit comes up with and those roll up tights are a classic of the 1920's. It all plays deliciously into the dirty flirty flavor of the number. And of course I had to include a snap of me and Little J backstage....cause why not? 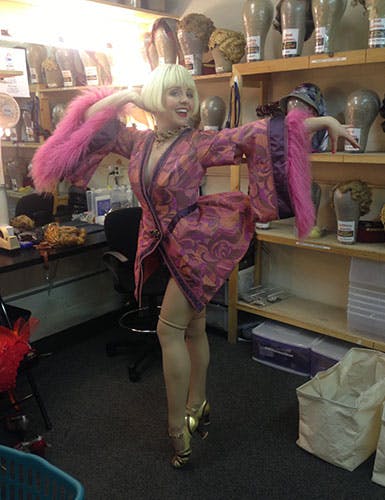 I change into this "kimono" onstage with help from lovely ensemble man Andy Jones for "Gee Baby Ain't I Good to You" with Vinny Pastore. The bustle in the back helps cover the tiger tail lump and gives it a fun cheeky quality. William put Velcro as the closure so I could get it on quick, and if you know William, you know he HATES Velcro. So thanks William:) All of my fittings with him were so fun. At some point he was always rummaging through the feather boa bag at Tricorn studios to give Olive some silly embellishments. The pink fur coming out of these sleeves was a definite win! 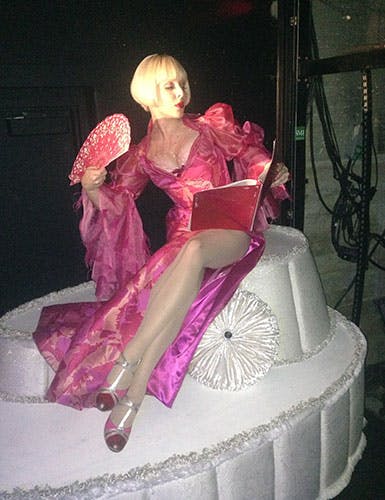 For lounging at home, Olive Neal obviously needed something ridiculous, over the top and PINK. The fabric William found for this is STUNNING. There was only so much available and they used every inch to build this fabulous costume. It also strategically covers up what's to come;) I just love how this costume looks in her all white apartment. 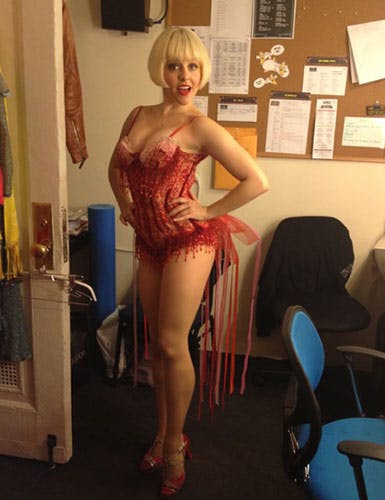 So the gorgeous pink robe comes off onstage to reveal Olive's outfit for the tune she sang in nightclubs. This is the experience she claims deems her worthy of being an actress in a serious Broadway play. There were a couple ideas on how to make this look, but William landed on inspiration from a corset worn by Marilyn Monroe. The boning and interior structure is such that I'm literally being HELD together in this shape, which I loooooove. Mostly because it hides all the cookies I shove in my face between shows on Wednesday and Saturdays. 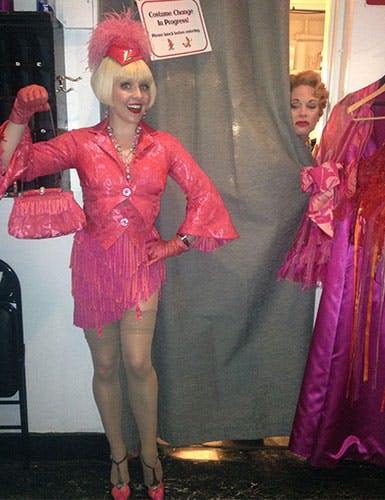 William explained to me that in designing Olive's rehearsal looks, she would have been reading Women's Wear Daily and told that everything needed to match. The dress, the shoes, the hat, the bag. And of course Olive takes it a step further to have that ALSO mean the garters. What cracks me up about this look the most is that she's in a "suit," because a suit is what one wears to their first day of work. What you can't see is that her little suit shirt under the jacket is sheer. It all helps make her entrance into this scene of sensible people, a perfectly chaotic one. Marin obviously does NOT approve. 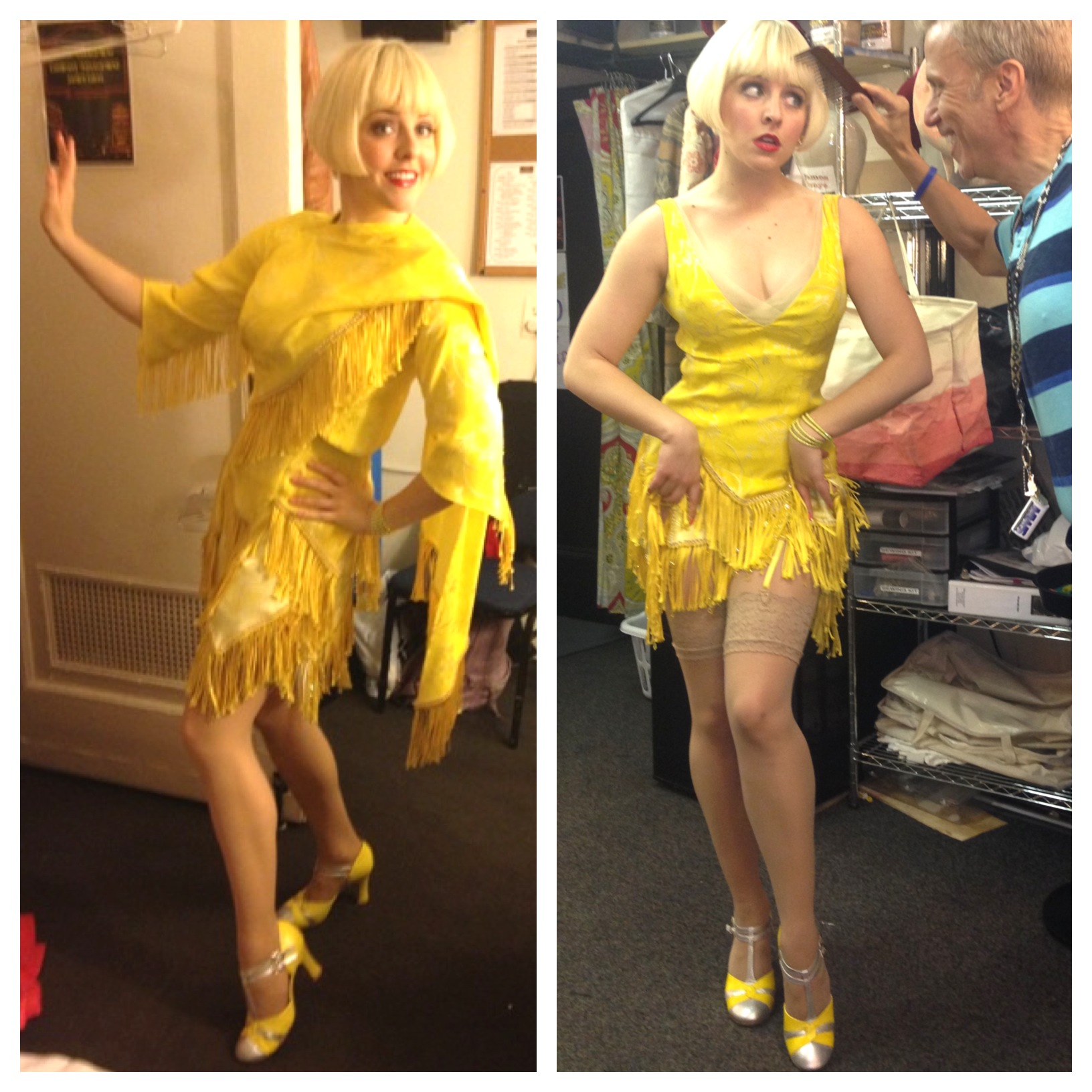 I did a little split screen for this look because the jacket comes off on stage before I sing "Let’s Misbehave" with Brooks. If you've seen the show, you know Helen Sinclair's entrance into rehearsal is punctuated with a dramatic jacket reveal, and this is Olive's attempt at copying her. And of course, she arrives with everything matching. Even the garters. And let me tell you: yellow garters were not easy to find! That's me being a little spoiled snot to Eddie while he combs my wig backstage. I should also note that the size of my rack is not nature, but the result of my mic packs having to live in my bra. Thanks for the boost, sound! 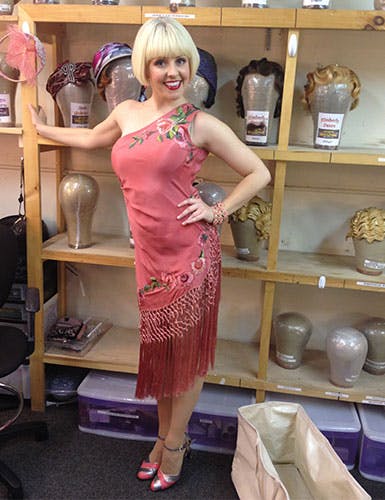 William quickly realized during previews that audiences were telling time and recognizing the change of day by my costume changes, so this was a bit of a last minute addition. It's actually a piano shawl that he had made into an off the shoulder moment. It moves so flirtatiously and almost feels as if I'm wearing nothing. It's on stage for maybe 15 seconds, which always makes me a little sad! 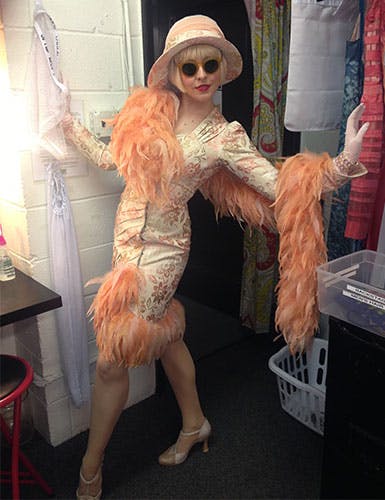 This is one of my favorite looks that William designed. It's Olive's travel look, and even the prop suitcases are in the same fabric as the coat. He had one of his assistants drop the fabric off with our set designer Santo Loquasto, insisting that Olive's luggage match her outfit. And as you see, this is another genius feather boa find! These peach feathers are ALL OVER the St. James Theatre as I am constantly molting. 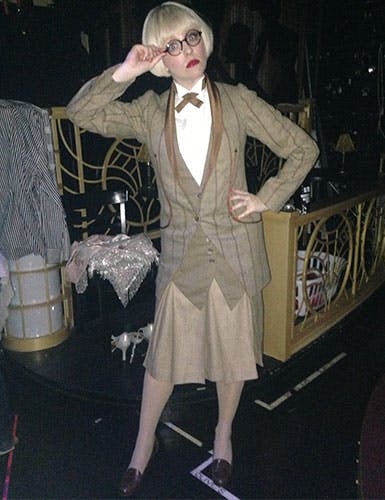 When I went to William's design studio in TriBeCa before rehearsal, this was the look he was most excited to show me. Strange, seeing as there are no feathers. However, it's a fun departure from how we are used to seeing Olive because it's her costume for "Dr. Phillips" in our show within the show. This scene is probably one of my favorites because it's when you see the four of us "acting" upstage to an "audience." I am of course suitably terrible. Since the "doctor" is a psychiatrist, she is seen in a Freud inspired look. It's definitely still Olive...but in brown. 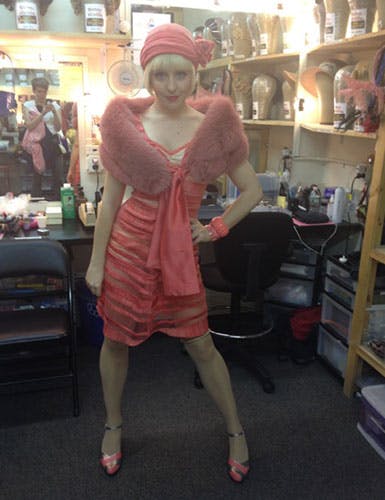 This is Olive's second travel look, and subtlety one of the sluttiest things she wears. It's entirely see through. Underneath is a nude, shiny, booty short situation. The first day I wore it in tech there were several puzzled looks and "Wait...is that SEE THROUGH?!" Yes. Yes it is. 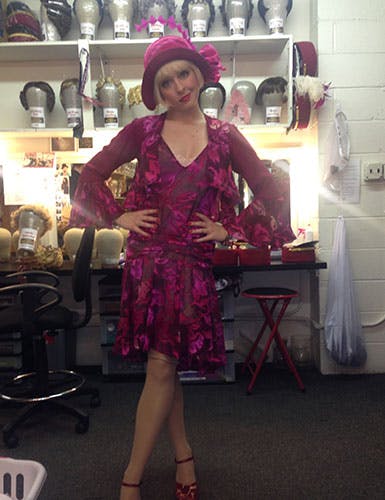 William's theory is that there can only be ONE red dress in any show, and this is it. I don't want to spoil anything, but I wear this when something pretty epically and hilariously terrible happens to me. I love it cause it's got a slouchy/flouncy feel to it, which makes it a fun dress to complain and be annoying in! 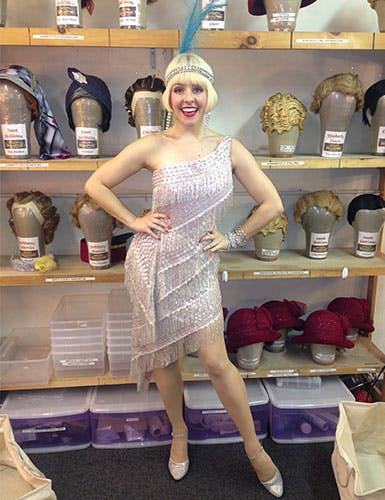 I could've included this dress earlier in my list, but sadly it's only on stage for 10 seconds so I INSISTED it be the look I bow in. It weighs 800lbs 'cause it's covered in beaded fringe. It's so heavy they can't hang it up 'cause it would slowly stretch out from the weight. I'm wearing the same head piece and jewels I wore for our cast photo shoot too.

And that's it for Olive! Thanks for coming on this backstage journey with me! As you can see, I change clothes a LOT. I feel incredibly lucky to have been designed all these fabulous costumes. Could I have expected any less from William Ivey Long? I think not!

See all of Heléne Yorke’s gorgeous dresses live (as well as her phenomenal performance) in ‘Bullets Over Broadway’ at the St. James Theatre.