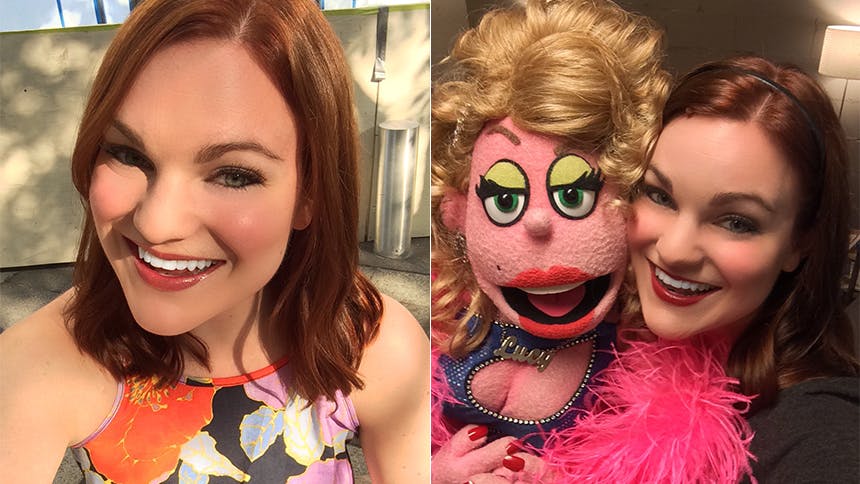 1. If Kate Monster were my best girlfriend, the thing I would love most about her is:
She is so genuine. It's always surprising to me how sweet and caring she is. She truly wants the best for the people she loves—maybe not Lucy but that's personal :)

2. And the thing that would drive me crazy about Kate is:
Because she is so sweet, she can be a little naive and needy. She would ALWAYS want to talk about Princeton…that would probably get old.

3. Three songs every romantic mix tape has to have:
"I Will Always Love You", Whitney duh Houston
"I Just Called to Say I Love You", Stevie Wonder
"At Last" the Ella Fitzgerald version
And let's throw in Blue Seude's "Hooked on a Feeling" because I currently have it on repeat.

4. When I want to make myself feel special I:
I FaceTime with my two-year-old nephew who lives in Minnesota with the rest of my family. When he looks at the phone and says, "Love you Auntie Libby", I feel like the most special person in the world.

5. My craziest Mary Poppins tour story:
I have so many amazing memories it's hard to chose! There was one night I got REALLY excited as "Step in Time" was starting and as we dove into a held pose at the edge of the stage with our chimney sweeps, my tap got caught and I ended up toppling over the edge of the stage onto a small lip that was a few feet under the main stage. Thank goodness it was there though because if not, I would have been in the pit. Pretty hilarious to think about everyone holding a balanced pose and me just falling down and rolling below the stage.

7. The most embarrassing TV show I love to watch is:
The Real Housewives of any and every location. It's a little embarrassing but come on, the DRAMA—it's priceless.

8. Line or lyric from Avenue Q I’d want as an inspirational poster:
"Don't stress, relax, let life roll off your back, except for death and paying taxes, everything in life is only for now."

"For Now" has such a poignant message but is delivered in a simple, down to earth way. It's always relevant no matter what's happening in life. I love getting to say those words every night…it's a great reminder that life is short and should be enjoyed!

9. Performance that made me want to be an actress:
My parents raised me on musical theater and I think in a way I always knew! We listened to showtunes every day in my house but when I was five, my sister played an apple tree in a production of Wizard of Oz. Wanting to be exactly like my brother and sister growing up, I knew I was destined for show biz :).

In a more serious way, when I was looking into college/thinking seriously about going into theater as a profession, Kelli O'Hara's performance of Clara in The Light in the Piazza was an inspiration.

10. When I want to really laugh, my go-to TV show and movie are:
The Office and Friends are always a good option. And of course, the classic, Anchorman.

Avenue Q
Best Priced Tickets
Newer
Turn Up For On Your Feet! How Pumped Are You for the New Broadway Musical?!
Older
10 Swoon-Worthy GIFS of A View From the Bridge Star Russell Tovey