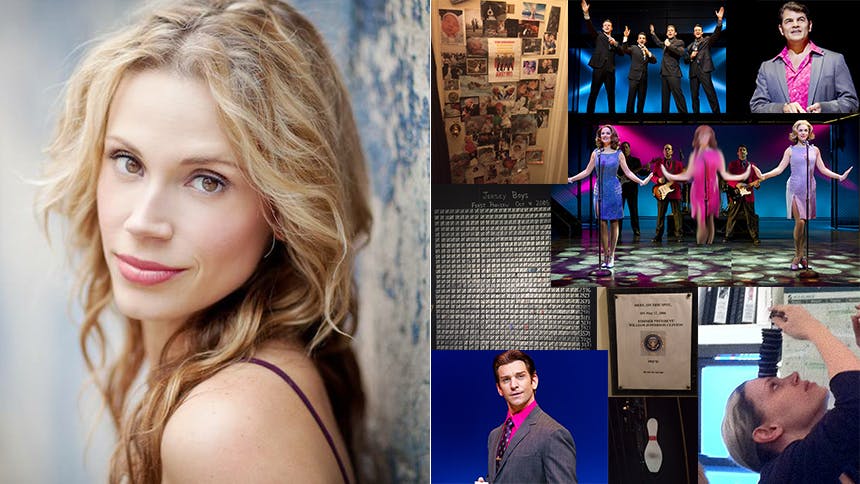 girl Jessica Rush wears many hats in the hit Broadway show. From an "Oh, What a Night" strumpet to Lorraine, the foxy journalist who steals Frankie Valli's heart.

One of the fiercest moments in the Tony-winning musical comes when Jessica Rush struts across the stage with her hatbox as "Bye Bye Baby" begins. #Slay

So how lucky are we that Jessica Rush is sharing with BroadwayBox 10 secrets about life backstage at the August Wilson Theatre, home of Jersey Boys?! Read on as she relays stories fans have never heard before.

1. Our SHOW COUNT BOARD! Located on the wall in the wing downstage right, this is a running tally of how many shows we've done, including previews. As of today we are at 4081...personally, I'm at about 1700. WHAT?! It's super fun to look back thru the years; there are little drawings to notate holidays or special events, such as anniversaries, Hurricane Sandy, the IATSE strike and our two-girl show! Which leads me to... 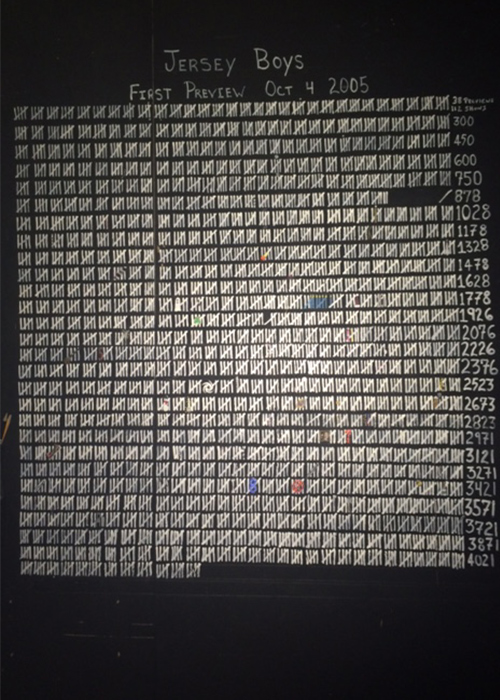 2. We did a two-girl show! It was about three weeks after I joined the company, and a perfect storm of someone being on vacation, a universal swing with a personal day and an unexpected illness. Katie O'Toole and I did all the girl roles, with the male swings filling in where they could. John Hickman and I were on a "date" bowling, instead of the two ladies, and Francine was unseen...I read the lines for the phone call offstage right before I entered as Lorraine. Crazy!


3. Speaking of bowling, we actually do! Sort of. The crew has a bowling pin on a fishing rod that gets held out into the wing for us to aim at, and we "bowl". Sara Schmidt and I try every week to bowl a perfect score, a week full of strikes...we try really hard not to disappoint the crew watching from the wings, or ourselves. We put a lot of pressure on ourselves.....Yep....We take it pretty seriously. Bring on the turkeys! 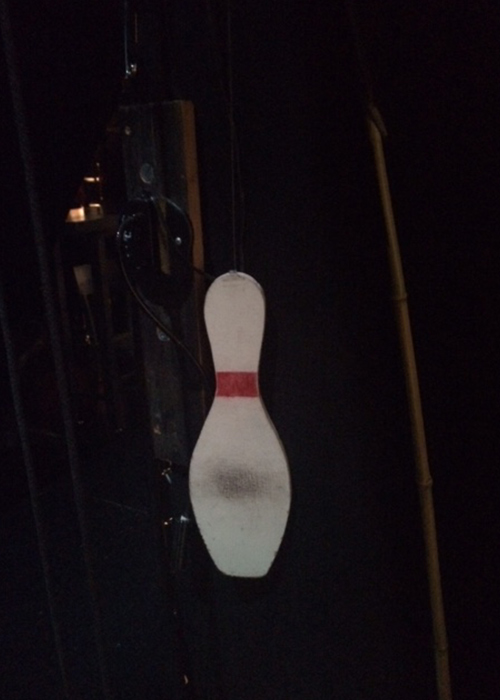 4. Our crew rocks! We have a great time backstage with them. I mean, the majority of them have been there for the entire ten-year-run, so they know us, and our quirks, pretty well. One of my favorite moments backstage with them is our dance party. There are definitely more than a couple points where there are legit, choreographed moves. Kenny Harris sure can move!

5. Ten years is a long time...and we have the events to prove it. It's nuts how much life has happened since the show opened. Michelle Bosch, our PSM, keeps a running album of it all on the door of the stage management office. It's really lovely to walk in everyday and see a door of love and memories. The only rule is the picture goes up if the event happens while you're in the show, which counts out my daughter, Elliot (she was born in the 14 months I was away), but my wedding is up there! I believe we're up to 15 weddings and 27 babies...not counting fur ones. Family is everything. 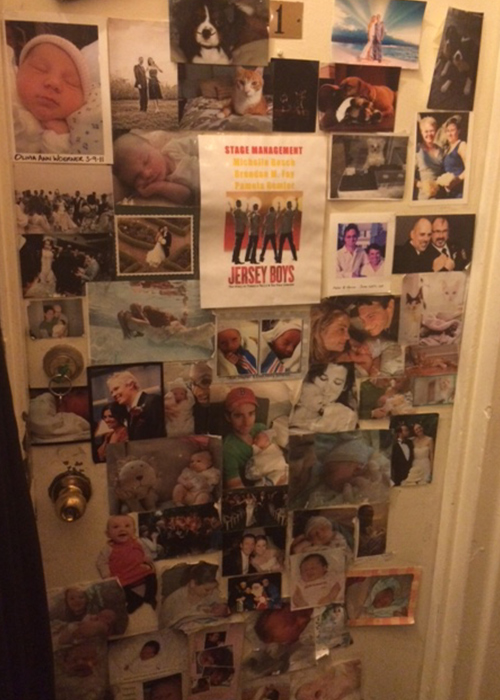 6. As you can imagine, Super Bowl Sunday is serious business in our frat house at the August Wilson. Every year there's a game, a little friendly competition. This year we had to carry M&M's across the room using a straw, but my first year it was the "Chocolate Unicorn"; see how many Oreos you can balance on your head. Here's a pic of my winning horn...9 cookies! 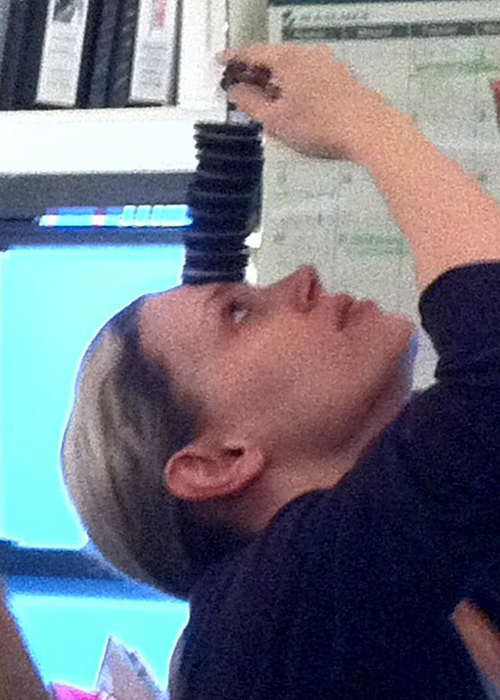 7. Something the audience can't see, but we can, are the Christmas lights that are hung in the spot booth. Sean Fedigan and crew keep it festive, even switching them out to red, white and blue for the Fourth of July!

8. In the accounting scene it's not uncommon for Tommy DeVito to write a note to Bob Crewe (Peter Gregus) on the check he gives him. When Andy Karl was with us, he saved all of them and made a giant paper mache head of Peter Gregus. It made a great pinata.


9. A not so secret tradition is the Saturday Night Scream. Peter Gregus, an original cast member, began it when Hairspray was across the street. They would sing "New York, New York" and do a kickline in their dressing rooms at the five-minute call to wish a fantastic show to their neighbors across 52nd Street. It has since become quite elaborate at times, with Bryan Cranston and Sting joining their respective companies and entire choreographed numbers...with a band! We have so much fun with it and it's a wonderful little slice of Broadway camaraderie.

10. There's a plaque hanging over the commode in the stage management office to commemorate the time when Bill Clinton used the facilities. How many shows can say POTUS used their toilet? It was a thrill…even if he did leave the seat up. ;) 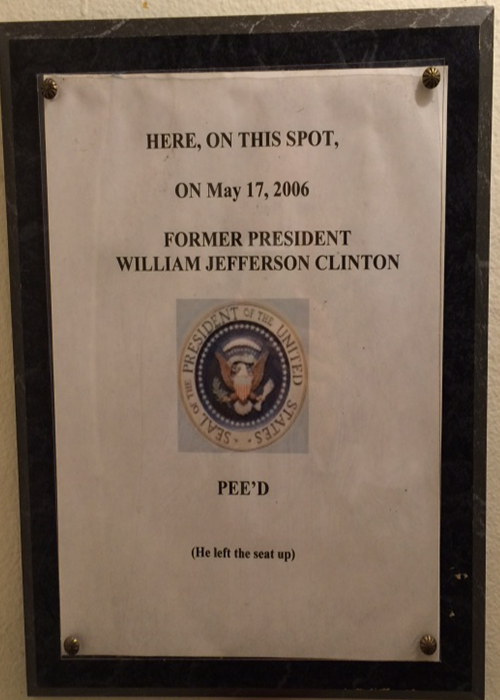 Now that you feel like part of the Jersey Boys family, go visit the August Wilson Theatre and check 'em out live.