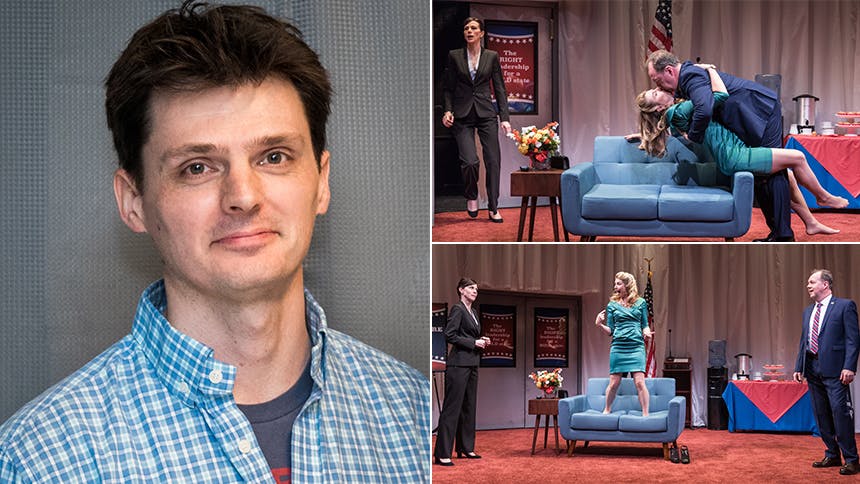 is now running off-Broadway at New World Stages after a hit Los Angeles run that earned three L.A. Ovation Awards, including Best Playwriting for an Original Play. His previous work includes off-Broadway's Handle with Care, the TV series Brain Games, and the novel Personal Statement, which he is adapting for the screen with his wife.


BroadwayBox spoke with Jason for our new interview series with New York theatre's creators and designers. Read on as he discusses creating this topical work, advice for aspiring writers, and the preview process.

1. How did your process begin for Church & State? What was the birth of this idea? When did you know you had a full length play here?
The seeds for this play date back to 2007. The issue of gun violence in America first became important to me after the shooting massacre at Virginia Tech. I went to UVA (Virginia Tech's “football rival”) and the images on TV of candlelight vigils by Cavaliers for their rival Hokies touched me profoundly. And I realized then, like many Americans, that we had a problem in our country. Guns were a national crisis. Then the shooting in Tucson where Gabby Giffords was shot. And I watched the news, riveted and angry, scared and hopeless. How could this happen? To one of our own politicians? Will this force Congress to finally take action? When it didn't, I wondered, bleakly, if the response would have been different if something like this had happened to a Republican. And I couldn't get that dark, nagging thought out of my head. Then over the summer of 2012, I was talking to a friend from Raleigh, NC about religion and politics and a new seed was planted for this vague idea I had cooking for a play, somehow combing religion, guns and politics. And then in Dec. 2012, the tragic shooting in Newtown. And I'd had enough. I had to turn my rage and fear into action. So I did what I know how to do. I wrote a play. A month later, in January 2013, I had a first draft of what would eventually become Church & State. I had three friends read the play with me in our living room. We talked about what worked what didn’t. I shared the play with a few director friends who offered some great feedback. And eventually one director, Ralph Meranto from JCC CenterStage in Rochester, read the play saw a lot of potential. He committed to producing it if we could develop it together. So for the next few months, I’d write a draft, he’d ask questions and make comments and suggestions, I’d do a rewrite and we’d repeat the process. I think it was late 2015 when we felt good about the final product. I then shared the play with two friends in DC who loved it and wanted to do a reading for their Actors Salon. And that was the first public reading, January 2016. I knew then the play was basically ready.

2. What’s one thing you learned during Handle with Care that truly informed your work on Church & State?
The big thing I learned was that previews are the time we learn what works and what doesn’t. For Handle with Care I thought the play had to be perfect by first preview, but really those early performances are for the cast, director and I to test moments out in front of an audience. As scary as that can feel, it really is the best way to learn. It’s like stand-up comedy. You gotta try some bits that may bomb a few times before you get the joke perfect.

3. What are three pieces of advice you’d give to someone who dreams of becoming a playwright but doesn’t know how to begin?
Number one: Write, write, write. All the time. Short plays, sketches, one acts, full lengths, comedies, dramas, musicals, try it all, see what sticks. And get the bad writing out of your system. No one will write the perfect play their first time out. It’s like running the rusty faucet for a few minutes until the water runs clear. You gotta get the junk out and then some clear water will begin to flow.

Number two: Read your work out loud. Gather some friends in your living room and read the play and get feedback. Show your play to anyone who will read it. Collect opinions, steal good ideas, but also trust your gut and don’t take every piece of advice or criticism to heart. Don’t write to please everyone. Write the play you want to see!

Number three: Once you have a final draft you’re proud of, don’t wait for someone to choose it. Be proactive. Send it to theatres and artistic directors. Or find a way to get it produced on your own. Do a showcase, an off-off Broadway mini contract, in a bar or a church basement, whatever you can muster. But get it up in front of a real paying audience and watch it every night. You only learn what works after going through the entire process from a first draft to closing night.

4. What excitement and stress goes into readings and workshops? How do you approach them?
It’s funny, at first there was never any stress for readings, it was all excitement. As I get older and as I learn how much can sometimes be at stake I get more and more anxious during readings. I like the rehearsal process of workshops. I like sitting around with actors all trying to craft the play together into something beautiful. But sitting in the audience during a reading is always a bit nerve-wracking. It’s something I struggle with. There should be less stress and more excitement because it’s a really cool thing we get to do: put on a play! I do love the very first public reading of a play. That first time an audience hears the play, the first time I get to hear how a large group reacts… it’s very special. And in some ways, as a writer, I’m always chasing that first reaction to the play. Those first laughs, those first gasps. There’s also something unfinished and raw about readings that is hard to replicate on stage. Once it’s on its feet, it suddenly feels more removed from the audience, too clean and perfect. And I do like the messiness and intimacy and immediacy of readings and workshops. So there’s a bit of good and bad— but readings and workshops are a necessary beast.