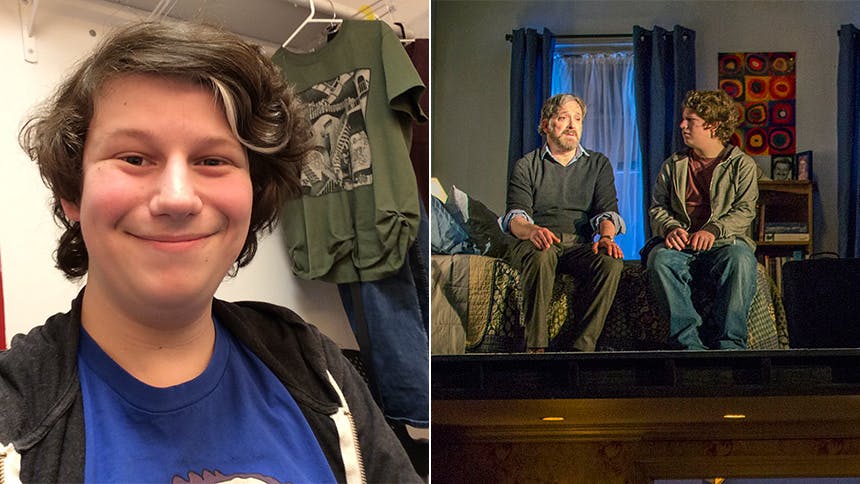 Scroll on to get to know Seth a bit better as he talks about his personal connection to the play, the Tony-winning musical that made him want to act, and why Chicago pizza beats NYC.

2. Having had grandparents that survived the Holocaust informed my relationship to the material in that:
It really shaped my view on Michael’s book in the play, since he’s arguing that we should stop fixating on a tragedy that deeply affected my family and me. What Michael’s argument ignores is that many of us don’t have a choice regarding our memories of the Holocaust. What Michael sees as an unhealthy obsession, for me at least, is critical to understanding my family and my history.

3. The most important lesson I’ve learned working with this cast:
Enjoy the little things about every show. No two performances are exactly the same, and no two audiences will react in the same way. The little things that set every performance apart are what make doing the show every night so thrilling.

4. My favorite thing to do backstage during the show:
I really like to draw during the show. I keep a sketchbook in my dressing room at all times, and it’s sort of how I meditate and calm my nerves before and during a show.

5. Three things I really love about living in NYC:
1. No matter what you need, it’s 10 minutes away.
2. The bagels; the variety, the freshness, the heavenly glow that surrounds each one. Each one is unique and precious.
3. There is so much fantastic theater. The only problem is that it’s impossible to see all of it.

6. Three things I miss about Illinois:
1. My dog.
2. The pizza is better in Chicago. You can have your own opinion, but if you think New York pizza is better your opinion is objectively false.
3. Movies don’t cost $20.

7. The play or movie that made me want to be an actor:
Avenue Q. I saw it when I was in 4th or 5th grade, so it was my first exposure to raunchy comedy, and I absolutely fell in love with it. Even through the absurdity of its puppets and its filthy humor, it felt very real to me. That show made me want to form that kind of connection with an audience, not just to perform but to share something silly and joyful with them.

8. A role I’d love to play in 10-15 years:
Max Bialystock. Or Leo Bloom. Or any character in The Producers. I don’t think there’s any other show where every character is so unique and fun.

9. My pre-show rituals include:
After I do regular boring diction stuff, I like to do another diction warm-up AND get into character at the same time by mouthing all the lyrics to a rap song. Usually something by Eminem or Childish Gambino.

10. Advice I’d give to aspiring young actors:
Never let yourself be scared or intimidated by anything. As an actor, your best choices are made when you have confidence in yourself and your understanding of the character, and your best shows are the ones where you’re comfortable with the audience. Performing can be nerve wracking, but all the things that make it scary are also the ones that make it so exhilarating.

Hurry over to the Laura Pels Theatre before April 30 to see Seth Steinberg in 'If I Forget'.