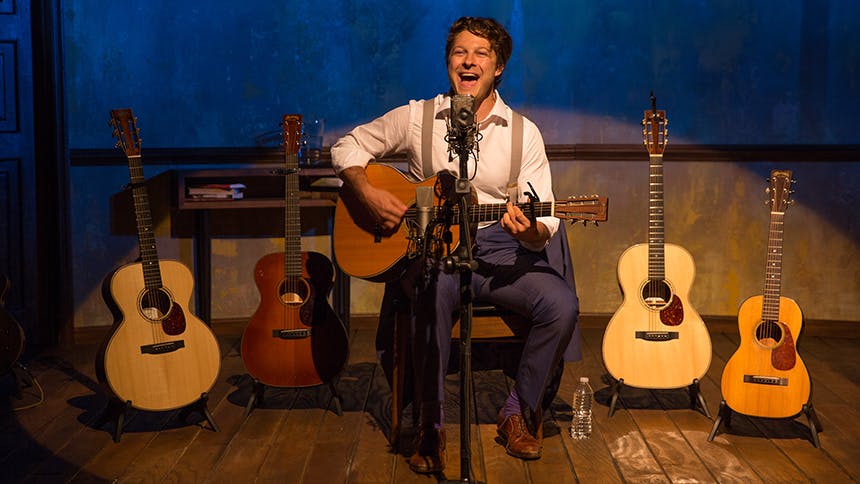 It only takes 70 minutes for singer/songwriter Benjamin Scheuer to win your heart and then break it in the acclaimed new one-man-musical The Lion. Through song, Scheuer tells the story of his complicated relationship with his late father and his own battle with cancer at age 29. Yes, it’s heavy but it’s just fantastic (as evidenced by it’s encore runs here in New York and engagements abroad).


BroadwayBox caught up with the gifted 32-year-old storyteller to talk about the experiences leading up to the show, his classic style and the live music he’s listening to.

1. You’re 29, sitting there getting chemo, what promises did you make to yourself about life after cancer? What did you have to do?
I asked myself if I was doing the things I wanted to do with my life and what did I want to change. And I spent my time writing songs before I was diagnosed with cancer, and when I finished chemotherapy I put myself back in that with renewed vigor. I loved what I did and it became clear that was the important stuff. The day I was told I had advanced stage cancer, the first person I called after my family was Geoff Kraly, my record producer. We were working on a record called The Bridge I made with my band Escapist Papers—and that’s the record from which this show comes. And I called him and I said I’m going to come work and we worked on the song “A Surprising Phone-Call” that day—when Dad calls Mom from beyond the grave. I decided to make bad things into good things, always. I have very little time for guilt and shame; those aren’t helpful. By all means be a good human being, but don't hold onto emotional baggage that just drags you down. I tried to have a positive outlook on life: here we are; we are doing it.

2. Outside of the Lynn Redgrave Theatre, what’s best place in New York to hear live music now?
My favorite band in New York City is called paris_monster and they regularly play at Rockwood [Music Hall], as does my friend Jean Rohe. These are two artists whose songwriting I particularly admire so I like going there. And if you want to hear the best big band in the world go to the Village Vanguard on a Monday night.

3. What did your mother and brothers say after seeing The Lion?
They’ve always been very, very supportive of me. I think they are proud that I took the worst things in my life and using art turned it into what is essentially the best thing in my life. It’s all very real to them; they were there for all of it.

4. You did the NYC impossible: you dated your train crush. [He met his ex Julia on Metro North.] What advice can you offer to others who want to be so bold on the train or subway?
I find a big smile very appealing. Once people smile at me in a really genuine and open way, I find that very warming. And when people say good morning to one other in the morning, I think that’s a really nice thing to do.

5. You’ve got some pretty killer style. What are your three style rules for guys looking to step it up?
Shine your shoes; wear clothes that fit; and get a good tailor to shorten or length or take in or take out as necessary. I don't know a great deal about fashion but I know classic style will always be cool. I grew up really digging Guys and Dolls so I’d be really happy wearing a checkered coat with a sharp label (thank you Frank Loesser).

Do not miss Benjamin Scheuer in ‘The Lion’ at off-Broadway’s Lynn Redgrave Theatre through March 29.