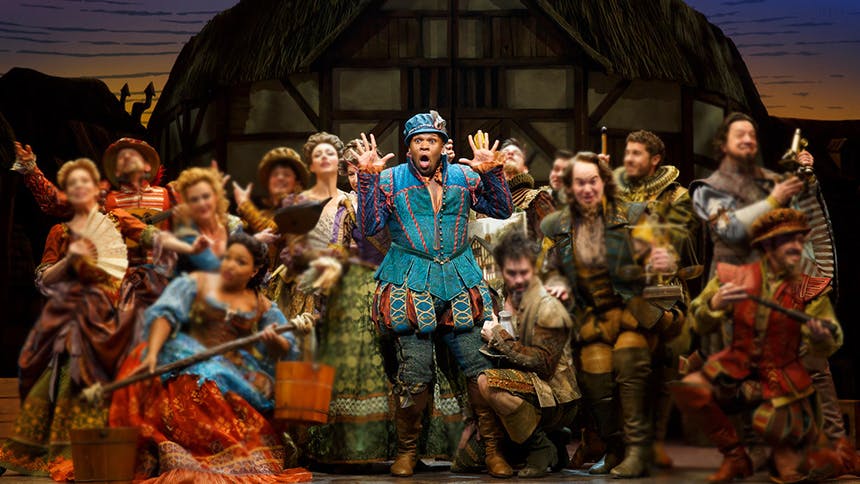 You just can't help but love Michael James Scott as the sweet-voiced Minstrel, welcoming audiences to the hilarious hit musical Something Rotten!

The standout role marks Scott's ninth Broadway show and his fourth in a row with Tony-winning director/choreographer Casey Nicholaw (Aladdin, Book of Mormon and Elf being their other collaborations). Below, BroadwayBox catches up with Scott to talk about his Broadway genie, life backstage at Rotten, and why RHOA can work as a musical.

1. What is it about Something Rotten! that makes you look forward to going to work each day?
I think it is honestly the joy that is in the building. It’s like the most professional/unprofessional environment you could ever have. It’s really like going to Disney for a year and you get to play in the park by yourself with your family and all your favorite friends. It’s the biggest, most fun playground, but we’re all grown. It is so different every day, and the energy backstage creates such an amazing energy on stage for everybody and the audience.

2. Fourth show in a row with Casey Nicholaw, what’s your best story you have about working together?
When I was preparing for the Genie [in Aladdin] I was trying to figure out inspiration that will make the role mine, and one day he was in his full Casey mode directing a scene and then in the middle he somehow we went into a full song and dance routine then came right out of it and went right back into directing the scene. No one in the room thought it was crazy, and to me I sat there and thought, ‘Oh my God, that's the Genie—Casey is the Genie.’ Now my nickname for him is the Broadway Genie.
Any chance Dreamgirls UK could be collaboration number five?
Oh gosh! I don’t know. That stuff is happening right now, which is exciting. People keep asking and obviously, sure I’ll follow him to the West End for Dreamgirls. I would love that but I don't know if that will happen or not. I’ve hinted to him.

3. You've been in a string of hits, but, earlier in your career, you appeared in All Shook Up, Pirate Queen, and Tarzan. What did that experience teach you?
All Shook Up was my first Broadway show 10 years ago and I was learning Broadway 101 very fast. What I got to learn was the reality of this business and the hustle that it took for me as a performer to stay in the community—and to be grateful for what I was doing at the time and not take anything for granted. In my younger mind, Broadway was always forever, and I didn't think about shows closing; I thought you do a Broadway show and then you go on and do another, rather than a show closes and you figure out ‘oh what am I going to do next?’ That was a huge wake up call for me. I had thought it worked completely differently. That time really solidified for me how truly rare it is to get into a Broadway show and be in a show that runs.

4. What’s the most embarrassing thing on your DVR?
Oh gosh, probably all The Real Housewives—it’s kind of ridiculous. I know what they are doing, what’s happening. Even like Vanderpump Rules, Tardy for the Party, and Manzo’d with Children are on my DVR. It’s kind of a lot but I’m kind of obsessed with it. I don't know if anyone has done it or not, but you could do the first Atlanta reunion as a musical word-for-word —it would be everything.

5. What’s your favorite role you played when you were young (high school, community theatre, college)?
My senior year of high school we did Purlie—I went to a performing arts high school in Florida—and I played Purlie. It won the district festival and so we got to do it at the state festival, and that for me was a huge highlight. For me, it was life or death. It was such a unique thing for me to do.

Get thee to the St. James Theatre to see Michael James Scott slay in 'Something Rotten'.