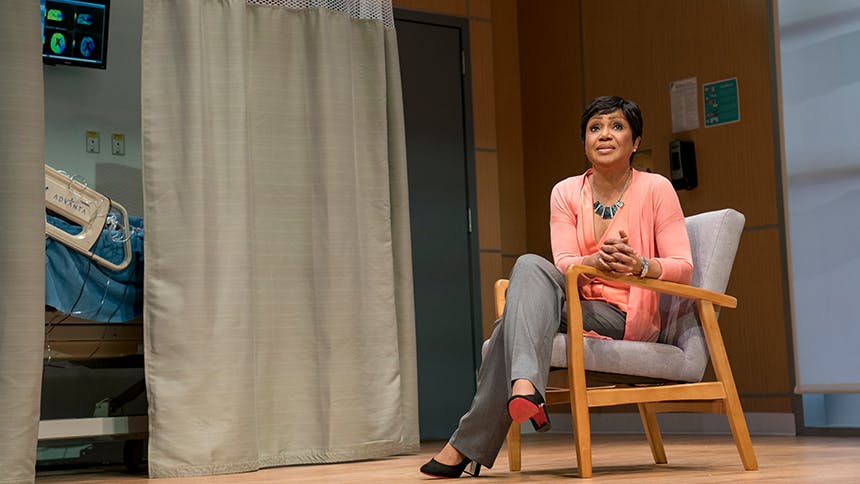 , Brenda Pressley stars as Constance Daley, an upper-class black woman who is in the hospital after her husband Maurice falls into a coma following a car accident. Soon, Constance realizes her marriage isn't what she thought it was, and her own classism and bias appears when she discovers her husband's mistress of eight years, Lashonda. Produced by Audible, which will also record and release the audioplay, Proof of Love only runs through June 16, so hurry downtown to the Minetta Lane Theatre to see this powerful piece live.


Scroll on as Brenda talks with BroadwayBox about the one-woman-show, recording the play for Audible, and her memories from the first preview of Broadway's Dreamgirls.

1. This is your second play with Chisa Hutchinson after Surely Goodness and Mercy. Why do you think her work speaks to audiences in such a powerful way? What struck you most about Proof of Love on your first read?
Chisa writes to the audience's humanity. She demands their immediate attention with universal truths.


2. Beyond the challenge of being alone onstage, what’s the biggest challenge for you in playing Constance? How do you navigate some of the tougher themes of classism and racism within the black community?
From the moment I started to read Proof of Love, I understood the role of Constance. There was no " challenge", per se, only more and more discovery as to who she is. Having done the play for a while now, I'm feeling more and more comfortable to enjoy those discoveries.

3. Is there a moment or line in the play you find yourself thinking about most outside of the theatre? What is it about that moment that strikes you?
I think the audience's absolute attention to every word of the play is what stays with me, on and off stage. You can, literally, hear a pin drop!

4. How will you change or adjust your performance for the Audible recording of Proof of Love?
Recording the play, I could be more intimate in my delivery.

5. You were part of the original Broadway cast of Dreamgirls. What is your fondest memory from opening that iconic production on Broadway?
Besides the incredibly-gifted creative team and cast of Dreamgirls, my fondest memory is of the moment the curtain rose on our first preview performance in New York. I was one of the four Stepp Sisters who opened the show, and the roar of that first New York audience seemed to shake the entire theater. I will never forget that... ever!