Broadway Showstopper Spotlight Series: Leslie Kritzer on Serving Up Cardi B Realness in Beetlejuice, Finding Herself as an Actress, & Refusing to Play Dumb 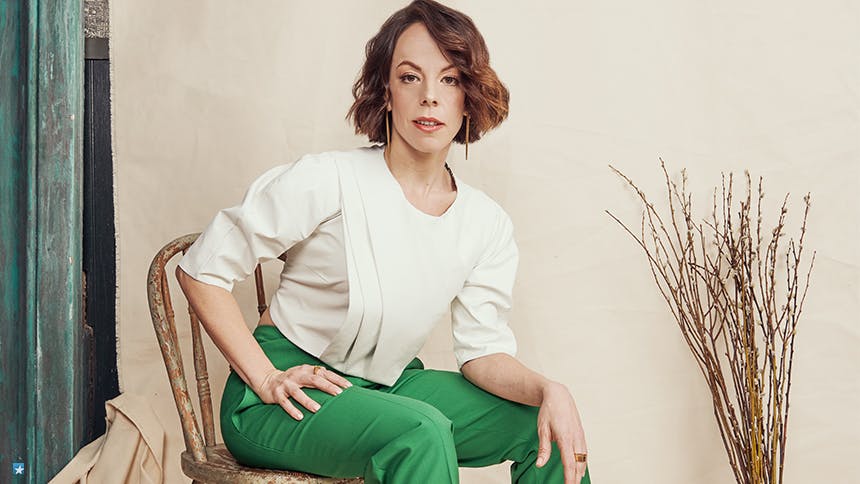 The Broadway showstopper is alive and well and living its best life this season, thanks to the 10 incredible performers featured in our upcoming spring photo & interview series. The talented group was photographed by Jenny Anderson at Times Square's Haswell Green's. The final profile in the esteemed group is Drama Desk and Outer Critics Circle Award nominee Leslie Kritzer. The gifted comedy queen gives a dynamic, scene-stealing, LOL performance in the Tony-nominated musical hit Beetlejuice

as Delia, the life coach giving Broadway audiences life. Every moment with her Delia is your favorite moment, including the iconic “Banana Boat Song” possession. Then Kritzer turns it out again as in Act II as a feisty, deceased, mint-green Miss Argentina.


When you were cast as Delia in the musical adaptation of Beetlejuice, what were your goals for this character onstage?
I stayed away from the movie. I haven't watched the movie in years and years. Catherine O'Hara is the queen of all queens. She’s a goddess, and I base so much comedy off of Waiting for Guffman alone. So, I wanted to stay, first of all, far away from the movie.

Second of all, she's written very different than the movie, which is good. What I was worried about at first was that she was going to seem dumb. So, my biggest thing with the writers and with Alex Timbers is that I made her different, not stupid. She lives on a different plane, but in a positive way. She knows what she knows. We all have that friend that's kind of out there and a little spiritually gangster—with crystals and rocks. But it's different playing someone eccentric than playing someone dumb. That was really important to me, because, especially now, we can't portray women as being dumb.

Also, I wanted to give her a lot of heart. Lydia's mom had just died like six months before, and oops, here I am. So I wanted to really find a love for Lydia.

What about the Miss Argentina character? What do you love about that brief moment?
My mom's Puerto Rican, so a lot of people don't know that I'm Hispanic—like literally straight down the middle. So, it was a nice opportunity to embrace that part of me. I grew up with Latin women, so I love her fiery, no-bullshit, take-no-prisoners attitude. And it's also a chance for me to completely channel Cardi B. I am totally doing send ups of her every single second I can within a salsa tango number. I literally do total Cardi B-isms.


Outside of Beetlejuice, when have you felt most artistically fulfilled or proud looking back at your career so far?
I've been able to do a lot of different things, but I always say that A Catered Affair was really the show that I call my grad school. [Director] John Doyle taught me so much about being a better actor. He stripped away so many of my tricks and my things, and taught me that I don't have to do very much. I'm just as good not doing as much as I am being a comedian. I got to show a completely different side of what I do after coming off Legally Blonde, so I was grateful. It was one of the most incredible experiences, and there is nothing like working with him.

Who were the people that shaped your comedy growing up and helped you to find your voice?
So many. The typical Bette Midler and Judy Garland sort of thing. For comedy: Gilda Radner, Lily Tomlin, Martin Short, and, believe it or not, Eddie Murphy. I loved all the old-school Saturday Night Live episodes. Carol Burnett is a big, big one. I would just watch a ton of comedians. I grew up during the heyday of the standup specials.


What feels different to you about Beetlejuice compared to other shows you’ve opened on Broadway?
It's literally the biggest show I've ever been in. When I saw the set in D.C., I cried. I walked into the theatre at The National, and I cried. I've never been on a stage where I felt like this is art. That's serious art up there, and I get to be on there. It's just huge in every way.

And I get to work with my favorite people. Alex Timbers is like my comedian sidekick. He just gets me. I get to do everything that I'm really good at in one show. I feel like I am at that age now and I've been around long enough that I can really appreciate that. I know what that is, and I know that it’s really, really rare.

What do you feel is the biggest challenge you've had to overcome to get to this place in your career?
Self-doubt, honestly. Giving up. Not owning what I do and what I do best. Once I harnessed that, I feel like I don't care as much anymore. They say when you hit 40, you start to go, "Well this is me, f#ck you if you don't like it.” And, in a way, that's just owning who you are as a woman at 41. When everything in the industry tells you that you're old, you go, "Oh, I'm just beginning." As a character actor, the jobs that are meant for me, are meant for me. It's hard. It's not easy all the time, but what I have is what I have. And there's a place for everyone.


You create a lot of original online content. Why is it important for you as an artist to have that outlet for yourself?
For me, theatre is my first love and it’s a part of me, but, as a writer and comedian, I pursue other things outside this. I would love to be able to continue doing that—writing a TV show, or doing my solo shows, or creating comedy videos online. It’s all part of what I do outside, but it informs what I do inside. They go hand-in-hand.

How do you refill your creative well?
I take time off and away from things. Your brain needs to imagine again. We are so connected to our phones. So, for me, a lot of things happen when I look around me and I take a second to take in life. I find life the funniest. I love people-watching. I love letting my brain just explore.


Do you remember the first time you felt talented?
Yes. It was when I was in my first-grade production of The Crocus That Wouldn't Bloom. My mother told me I would come home upset that no one knew their lines but me. And that I had very specific blocking already at that age that I knew I wanted and specific ideas what my costume needed to look like. I was a character actress in first grade. I knew that I had something because of the laughs that I got. Also, I just loved it. It just seemed instinctual. But I didn't start in the theatre. I started as a classical pianist at seven. That's when I really knew I was musically inclined. It runs in my family; it runs in the blood.

You are the first person to ever play Delia Deetz professionally. What do you want actresses who will play this role in their schools, on tour, or in their regional theatres to know about her?
She’s nothing but love. She really just wants to be loved and to be accepted. I feel like every girl in high school can probably identify with that. Also, have fun. She is positive and she wants to spread goodness…in her own way. It's such a fun part to play, and there are so many ways you can do it and color it. It's a real gift. And listen to the cast recording, I'm sure you'll be doing exactly the way I did it in the recording. Exactly, like we did in high school.

Get an exclusive first listen of Leslie's "No Reason" from the Beetlejuice Original Broadway Cast Recording from Ghostlight Records. Download or stream the album beginning June 7.

Beetlejuice
Best Priced Tickets
Newer
Exclusive! Watch Gifted Comedian & Singer Jessica Fontana in Rehearsal for What You See Is What You Get
Older
Tootsie Star Julie Halston Shows Off All Her Fabulous, Rich, Upper East Side Lady Looks by William Ivey Long