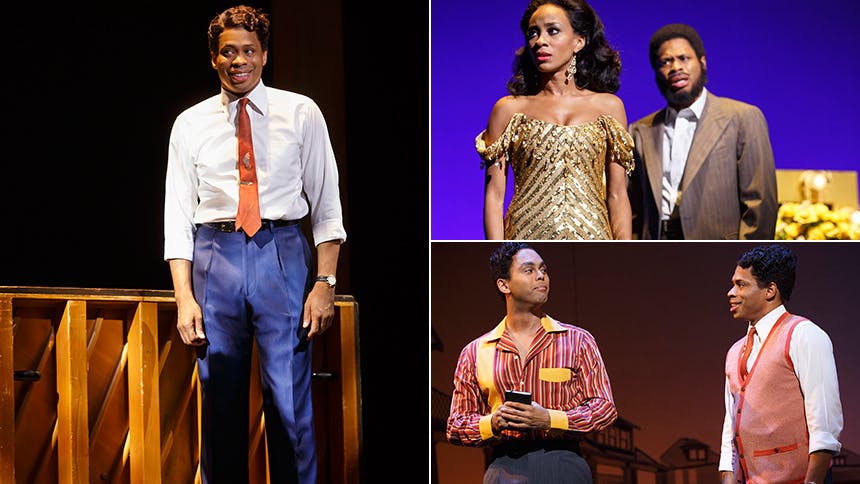 A triple threat in the truest sense of the word, Chester Gregory has delighted theatre audiences in Hairspray, Dreamgirls, Cry-Baby, Sister Act and The Jackie Wilson Story. Now, he's back on Broadway starring as Motown founder Berry Gordy in the smash musical Motown

. BroadwayBox caught up with the Jefferson and NAACP Theatre Award winner and recording artist to talk about his day with Berry Gordy, the power of meditation, and the challenges and rewards of Motown.

1. What’s the most important thing Berry told you or you observed from meeting him that informs the way you play him?
Mr. Berry Gordy is one of the founding fathers of pop culture and music and an industry giant. I found it pleasantly surprising that he is incredibly down to earth with a great sense of humor. He is very warm and direct, and he appreciates when others are the same. When he is speaking to you, he looks directly into your eyes like no one else is in the room. In fact, I spent an entire day with him, and never saw him pull out a phone to check emails or messages. He was in the moment at all times. At the opening night of Motown: The Musical, he danced on stage in our Soul Train line! He's 86 and full of energy and life!

2. If you could have dinner with three Motown legends who would you pick and why?
The three Motown legends I would like to have dinner with are Smokey Robinson, Stevie Wonder and Jackie Wilson. Smokey Robinson because of his longevity and resilience in the music industry—having written hits for pretty much anyone you could think of. Stevie Wonder because he's a genius who did not allow blindness to rob him of insight, nor stop him from living in his purpose. Jackie Wilson because (although he wasn't a Motown artist) he had a strong Motown connection because he gave Berry Gordy his start. [Jackie] went on to become one of the most inspirational artists of his time, influencing the likes of Elvis Presley, James Brown, and Michael Jackson, just to name a few.

3. What’s your pre and post show process like for this huge show you’re leading?
My regimen changes daily, so I can be sure to give myself what I need mentally, physically and spiritually, to give my all every night. In my dressing room, I have Himalayan Salt, Sage Oil and other natural remedies. Cast members often joke and call my room a spa! Well, isn't that where you go to relax? As a lifestyle, meditation is a part of my pre-show and post-show rituals. It allows me to center and mentally set the tone for the strenuous numbers within the show. I believe in the power of visualization and the power of pre-shaping outcomes. I'm actually launching a movement called Lucid Life that upholds the ideology that we have the power to shape outcomes. Additionally, I believe it's important to practice gratitude, stay in the moment, and embrace each day as it comes.

4. Having starred in The Jackie Wilson Story then going on to create and star in The Eve of Jackie, what’s the most fascinating thing you learned about Jackie Wilson that most people don’t know?
I have great admiration for Jackie Wilson's humor. I've studied many of his interviews, and I was so shocked to learn how wittingly sarcastic and hilarious he was. It's fun to incorporate those elements whenever I do a tribute to him.

5. What’s been the most challenging moment in your stage career and the most rewarding?
I am currently in one of the most challenging, yet rewarding moments of my career presently, playing the role of Berry Gordy. When I first booked the show, I pondered how I would be able to handle the grueling vocal demands of the show, as well as the 18-week cycle. I had to be disciplined, and now the reward is being a leading man on Broadway and the discipline continues. I am on an amazing journey.

Head to Broadway's Nederlander Theatre to see Chester Gregory wow as Berry Gordy in 'Motown: The Musical' through July 31.